I haven't been so good to my own body lately. I'd like to blame the French toast, the mocha lattes, the pizza, and what I call the vast buffalo wing conspiracy. But the blame really lies within myself. I've developed an eat-it-if-it's-there approach to food that has my bathroom scale answering back: "Well, what did you THINK I would say?" 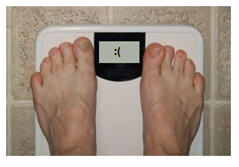 So, like millions of Americans before me, I've made a new year's resolution. Starting 2009, I'm going to eat fewer snacks, hit the gym more frequently, watch my portions, stop finishing my kids' dinners, and switch to skim mochas with light whipped cream.

(The sound of fingers tapping against a keyboard and some whistling)

So...how many days before New Year's? Ten? (And one extra second)

What am I going to do for the next ten days now that I've made my resolutions so tragically early?

Seen one way, it's an opportunity to get a nice head start on the road to good health. Seen my way, it's a free pass to do almost anything I want to myself until the resolution takes effect.

Such is the dilemma of making what I call a year-end 'presolution,' a hopeful promise made so early that it actually creates a lag time of personal lawlessness. The rationalization to let yourself go comes from the same place that allows you to buy Halloween candy a month before October 31, thinking you're just being practical. Then you end up finishing that whole bag of fun-size Snickers by October 28. Nice work. Before long, you aren't just watching the ball drop; you ARE the ball.

All presolutions come with built-in rationalizations:

It's just a brief moment in time, really; how much damage can you really do? And think of all the money you can save by skipping the gym, or how few dishes you'll have to wash if you consume only fast food. Nobody eats donuts on dishes.

Clearly, I'm in trouble. I'm even longingly eyeing the plastic-seeming pastries at Starbuck's, and everyone knows THAT'S a bad idea.

It's too late for me to turn this go-cart of gluttony around, but there's still time for you. Save all resolution-making for post-Christmas. Then at least you'll be breaking New Year's resolutions after they go into effect, not before they've even started.