More and more people are using social networking sites, including, sadly, criminals seeking to take advantage of the rest of us.

Threats on those sites include applications and quizzes, as well as malware, worms and viruses. But the main risk, says Trend Micro's Rick Ferguson, is information you post yourself that can jeopardize your privacy and your security.

Ferguson says that "we have a tendency on social networks to share more information that we need to." While you may need to reveal which schools you went to and where you worked to connect with old school mates or colleagues, "you don't need to share your date of birth, phone number and address," Ferguson said.

The threats are not limited to Facebook or MySpace. Ferguson also warns users not to be lulled into a false sense of security when using professional networks like LinkedIn. "Because it's a professional networking site, people give it more credibility and think it's safer than other networks," he said, adding that you put yourself at risk by "posting your entire résumé and exposing your business connections."

Both Ferguson and Symantec safety education director Marian Merritt warned about online quizzes and applications that are popular on social networking sites.

"Every time you accept an application, you're giving some third-party developer access to information in your profile," Merritt said.

She warns that "quizzes are sometimes attached to fraudulent marketing companies." She said her own teenage daughter took an IQ quiz and had to put in her cell phone number to get her score.

"She didn't notice that the terms of service would sign her up for premium texting until the bill came." Fortunately, this particular teenage girl has one of the most cyber-security-conscious moms on the planet, who convinced the carrier to stop the charges.

Some quizzes and surveys reveal far too much information. I recently came across a third-party survey that asks users to reveal "60 Things You Didn't Know About Me" with such questions such as "What are you wearing?" "When was the last time you were drunk?" and "How often do you have sex?" With answers to questions like these on your profile, it doesn't take a sophisticated hacker to derive information that he shouldn't have access to.

Some Facebook users don't seem to be aware of the difference between private messages and wall postings. I have a friend who is posting personal messages to family members' walls, unaware that those messages are seen by all of the person's Facebook friends.

Company spokesperson Simon Axten said Facebook has a team of people and software tools working to enforce rules for application developers. MySpace, according to a spokesperson, also employs a robust security team and tools, including software to block outgoing and incoming spam and warn users about potential phishing sites.

Facebook's application development process, said Axten, "is relatively open to stimulate innovation and allow people to develop quickly." But he said developers must agree to a set of rules which, among other things, prohibit them from sending messages on the users' behalf.

Developers are now required to disclose what information they collect during the installation process, and Axten recommends that users "pay attention to those notices." He said developers are allowed to collect only the information that they need to run the application, but that can sometimes include profile information and the profiles of your friends.

Facebook has recently beefed up its privacy controls to include what information can be passed on to applications or by applications to others. To configure your applications, click on Account in the upper right corner and select Application Settings. 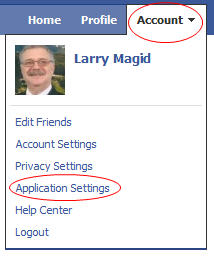 On all sites, be cautious about clicking on any links, especially those shortened ones that are commonly used on Twitter. If a link is shortened by bit.ly or tinyurl, you have no idea where it will lead you until after you click. Most security suites can warn you before your browser opens potentially dangerous Web sites. Twitter is in the process of adding security to these types of links but the process is not yet complete so you still need to be careful.

There are other threats, including the Koobface worm, that can steal your password and send spam from your account. Most Internet security programs will protect you against this and other malware.

Users should also be careful about links that appear in posts and messages that could lead to phishing or malware sites. And put on your thinking cap before responding to a friend's plea for money, even if it comes from your friend's Facebook account and includes a horrendous story such as being stuck in an overseas jail. Try to reach your friend some other way before responding, because it's likely a scam.

ConnectSafely.org has information on password security and social set safety tips for teens and parents.