When 13-year-old Grace Villegas wore a long-sleeve, off-the-shoulder shirt to school this week, she didn’t expect her teachers to comment on it. But that’s exactly what happened.

Villegas told Yahoo Style that her Charlotte Russe shirt led teachers at her Kansas middle school to give her “looks that made me uncomfortable in my own skin.” The teen also said that several teachers made comments about the amount of skin she was exposing.

According to her older sister, Isabella, 18, one teacher told Grace that “she was revealing too much chest and shoulders,” and another told her, “You’re just making bad decisions today, Grace.” Isabella told The Huffington Post that Grace eventually changed outfits due to the shame she felt.

When the teen got home and told her older sister what had happened, Isabella was angry. So she decided to channel that frustration into a statement-making T-shirt.

I wanted girls to know that they don’t have to stay quiet. Isabella Villegas, 18

The shirt Isabella made outlines her issues with school dress codes and the way they are enforced ― specifically when it comes to young women. The tee, which bears almost the exact same text as a t-shirt created in 2014 by Lex Daly, reads:

-blames the wearer for the onlooker’s perceptions/actions

Later that evening, she tweeted about it:

my 13 year old sister was dress coded for her shirt today for "revealing too much chest and shoulder" so i made her a shirt to change into pic.twitter.com/NdRQws91HB

The tweet gained significant traction. As of Friday, it has nearly 1,200 retweets and 3,000 likes. And hundreds of people have tweeted back at Isabella.

The 18-year-old told HuffPost that while she doesn’t think dress codes should be completely abolished, they shouldn’t exist as tools of shame.

“Young girls should not be shamed for showing their shoulders and other non-sexual parts of their body for non-sexual reasons,” she said. “[Grace] went in feeling confident, and left feeling like her teachers no longer view her as the good student she is. I wanted girls to know that they don’t have to stay quiet.” 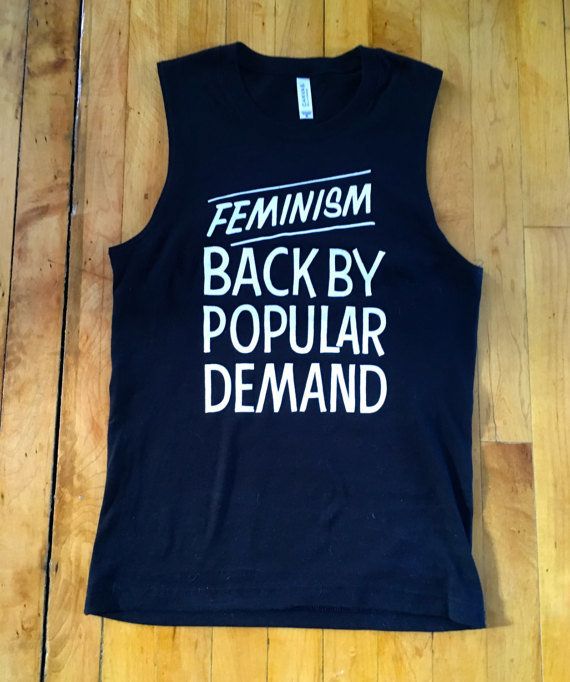 1 / 14
Feminism Back By Popular Demand
$20; buy it <a href="https://www.etsy.com/listing/496077958/feminism-back-by-popular-demand-muscle?&amp;utm_source=google&amp;utm_medium=cpc&amp;utm_campaign=shopping_us_d-clothing-unisex_adult_clothing-activewear&amp;utm_custom1=b9311cee-ce28-4ec9-b5af-27b88a245d05&amp;gclid=CjwKEAiA0fnFBRC6g8rgmICvrw0SJADx1_zAns4xFIJkAjJwS2cQLO7Nwo2pccFFxVHLSH0_zoqvvhoCQhHw_wcB" target="_blank">here</a>.
Angie Toner/Etsy