At a recent speaking event, a brave woman stood up and said to me, "G, can you tell us about your worst mom moment?"

But I can tell you here. I probably shouldn't, but this story is begging me to tell it so here we are. The stories are the bosses of me.

ONLY READ THIS ESSAY IF:

1. You do not get upset about accidental swearing at children.

2. You enjoy essays with absolutely no take away. No lesson, no tips, nothing.

3. You watched "Breaking Bad" and maybe had a teeny weeny itty bitty bad boy crush on Jesse -- like perhaps you found yourself deciding that meth dealing and repeated murder aren't TOTAL deal breakers at all, really. Nobody's perfect, after all.

A few months ago Craig and I started watching "Breaking Bad" every night. We loved "Breaking Bad" -- even though Craig would often reach over and manually close my mouth which hung wide open in utter shock during all the hours of that series. I found the show to be quite upsetting in all the best ways. So every night we got the kids to bed as quickly as possible and burrowed into our little slice of heaven which is our snuggly green couch and BAM -- all the drama would unfold in front of our tired eyes.

One afternoon during that time -- I found myself in the family room playing Uno with my daughters. I was there with the girls -- but not really there with them -- if you know what I mean. Because I was playing Uno. With a kindergartener and a second grader who mostly hate each other because they have not yet discovered that their angsty, conflicted, passionate feelings regarding each other are really love. So they fight and they fight and then when they are done fighting they plan their next fight. I know that there are spiritual people who insist that staying in the moment is heaven, but those people have never played Uno with my daughters. Playing Uno with my daughters could certainly be compared to an afterworld, but I might point you towards the other one. The one with the fire and torture and wailing and gnashing of teeth and ruing the day you were born. And so my body was there playing cards but my mind was thinking about Jesse and how on earth this sweet boy was going to get out of these unfortunate meth/murder situations he kept finding himself in due to no fault of his precious own.

All of a sudden, I was snapped out of my daydream and back to my senses by someone tapping me on the leg and saying: "Your turn." Since most of the time I live in my head -- this moment is the story of my life. This moment when I'm happily lost inside my mind world and someone in my physical world tries to bring me back to the present -- so I have to quickly figure out who I'm with, where I am, and what's going on. This is why we daydreaming introverts seem constantly dazed and confused. We are like scuba divers who are down in the deep on a quiet treasure hunt but are constantly being yanked back up above water. It takes us some time to surface and reorient.

Searching for a clue -- I looked down at my hand and saw one Uno card sitting in my palm. This was a GREAT clue! I was playing Uno, apparently! And Look! I only had one card left! Which meant I was WINNING! Ba-Bam! And before I had any clue what I was doing -- I held my card in the air and yelled:

I yelled Uno, bitches, at my 5-year-old and 7-year-old daughters. I called my daughters bitches. With great glee and gusto. In the middle of a family card game.

Somehow -- I had subconsciously channeled Jesse. Jesse says that, not me. I don't call people bitches. I do curse, actually. But more like a sailor and less like Paris Hilton. And normally not at my very small, precious, pigtailed children. Maybe AROUND them accidentally -- like when I can't get the front door open or drop something on my toe - but not AT them. Unless they secretly eat my ice cream, of course. But what I'm saying is -- barely ever.

You guys. The "UNO BITCHES!" hung in the air like one of those word clouds. It just SAT THERE while we all stared at it silently.

I looked up and Craig was standing in the door jam. This was his face, which I asked him to re-enact for this retelling. 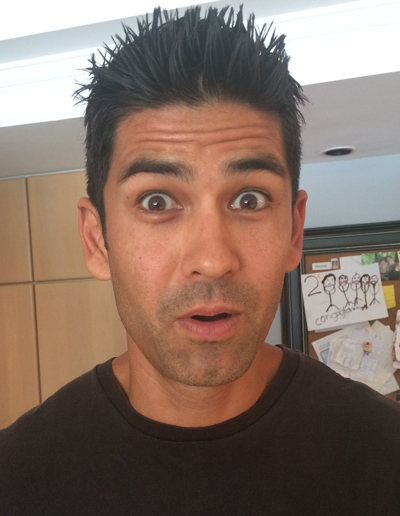 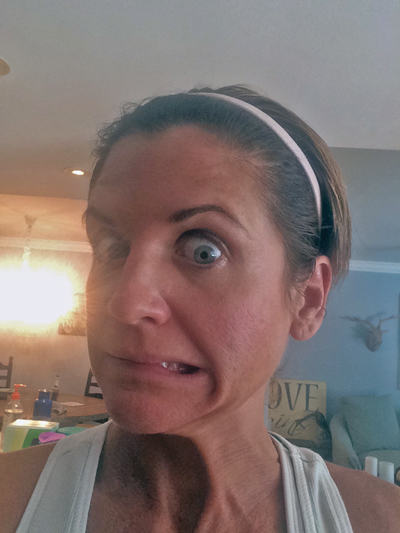 And then I forced myself to look at my girls -- who were watching me exactly how I watch Breaking Bad -- mouths hung open, eyes wide, frozen stiff. 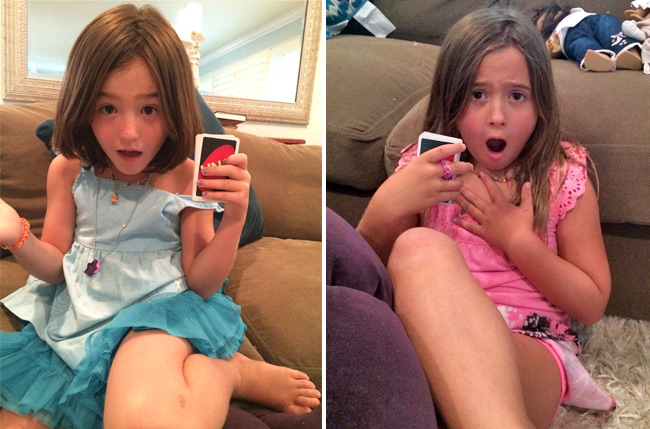 Sorry about all that.

And that was all. Because I really couldn't explain Breaking Bad Scuba Diving to them. Couldn't.

And we went about our business.

That's it. I will not be wrapping this story up with a bow and a nice lesson and a take-away. I got nothing for you.

I called my sweet girls bitches. And even so, I'll have you know that Amazon calls me an official parenting expert. And so here's the thing: if you do not call your children bitches -- I imagine that you must be some sort of parenting GURU. Good for YOU. Really. Well done.

There you go -- there's your take away. You are an AMAZING parent. Go forth today with great parental confidence and dignity, bitches.