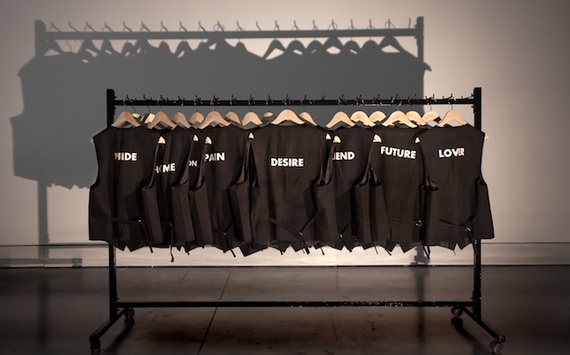 Awkwardness. I didn't really think about it much but it seemed fitting. Not the vest it was written on -- that was a few sizes too big for my small frame -- but the term itself. I always forget that first "w" in awkward and by now I have become extra careful and sensitive to the word. Were I to be asked why I had chosen the vest with the word awkwardness on it above a variety of vests with more fun or meaningful words inscribed on them, this was the answer I was prepared to give -- I had just signed a nondisclosure agreement, which I had not really read, since I wasn't planning on disclosing much to this group of strangers. Two of my closest friends had brought me here, to what they had described as a performance art therapy session, and their presence somehow made any potential disclosure of myself even more unlikely.

Einat Amir's "Our Best Intentions," was a crossover between psychodrama, theater and visual art, a video installation and series of nine evening performances, commissioned and presented by Artis for Performa 13. I participated in the November 20th performance at Affirmation Arts after work hours, during which a four channel video installation (of a previous performance filmed in Israel) screened in the same space.

After putting on the vests hanging on two opposing racks framing the entranceway, the 25 or so participants were led into the main space. There we were split up in to four groups and asked to make ourselves comfortable in one of four sections. The sections were furnished with the requisite IKEA furniture for a (1) dining room, (2) bedroom, (3) living room and (4) study. The lights went out. Four more people walked in, each taking a seat in one of the four rooms. A spotlight illuminated the dining room. A secure, assuring and kind woman introduced herself as the dining room's guide for the evening and asked everyone seated around the long table to do the same, while we other (sections) watched. The woman led the dining room group through various warm up exercises. Eventually she asked them each to think of a person they hadn't seen in a while, think about what they would like to say to this person, something they hadn't had a chance to express. One participant evoked her ex-boyfriend, another his dead sister to whom he wanted to tell about his sons growing up, and so on. The instructor then invited the man to further share what he would say to his sister and what it would mean to him to say it. Under the instructor's careful guidance, another participant was asked to play the man's dead sister and carry on a simulated conversation with him about his children and how they had grown up without her around. A distant sound marked time and not long after the lights turned off in the dining room.

Spotlight on the bedroom, where the activities were more lighthearted than in the dining room, if not entirely silly. What I at first thought was merely a warm-up exercise, went on for the duration of the allotted time. The instructor (a drama coach, one would think) instructed the group through a mishmash of wordplay, free-association games (a version of something called the Martha Game), improv and physical movement, often changing the roles and positions of the members. These activities -- usually intended to stimulate group dynamics, cohesion and creative thinking -- in this case served no purpose beyond the exercise itself. Some of the participants took great pleasure in the wordplay, providing some of the more entertaining moments of the evening. While others, perhaps anticipating a moment when things might take a turn for the more serious, just couldn't loosen up. After that first emotionally charged therapy session, it was a welcome respite, but not for long.

It wasn't until the third group in the living room was activated that the words we wore on our vests came into play and took meaning. The instructor led this group through a role-playing therapy session based on the importance the words held for each participant and the relationships they wanted to explore. By sheer coincidence, the group in the living room wore vests with the words Father, Mother, Death, Happiness and, I think, Sadness, on them. When the instructor asked the group to strike a pose resembling or embodying the word they each wore, the Father sat on top of the armchair, while the Mother kneeled by the coffee table in a subservient manner, offering a glimpse at Amir's working premise that there may not be any contradiction between performance and authenticity. The Father story became the protagonist of the scenario and the other group members became therapeutic agents for the young man's struggle between having recently become a father to a son and being the son to a distant father with a history of abandonment.

Now I am glad I didn't sit in the living room. Imagine how hard it might have been for an otherwise excellent instructor to make something meaningful of my struggle to remember that first W in Awkward. No instructor -- no matter how skilled and empathetic -- would be able to conjure up meaningful and therapeutic scenarios out of thin air. But if pathos was not the objective then my story would have been as good any. While I've referred to the guides as skilled and expert instructors (they are indeed professionals in their respective fields), they did not transmit any additional knowledge or tools to the unknowing audience. Rather the instructors knew how to tease out subconscious knowledge from what the individual or the collective body knows, that may be unbeknown to both parties. This isn't exactly a relationship of equals, but the distance created between the two is manifested as a condition for communication.

Finally the turn of the study room came, where I sat with my two friends and three other people. Our guide gathered us around and whispered that she wasn't going to make us do anything embarrassing but that all of her instructions would be whispered. First, we needed to take off our shoes and socks. She then lightly tapped on my shoulder and told me to lie on the floor on my stomach and slide. Others were already performing various instructions she had whispered to them. After a while, I was told to continue sliding but dance with my hands. Now I don't know about you, but I couldn't figure out just how to do this. It was awkward, to say the least. Soon afterwards, we were all placed in a line, singing in barely audible voices to those watching from the other rooms while doing various repetitive moves. Our session ended with all of us trying to climb along the walls of the space. I later learned our soft-spoken guide was a dance instructor at New York University. I am pretty sure that, without the instructions that produced our movements and behavior, our session must have felt like an enigma to our audience, or perhaps something close to watching a contemporary dance performance.

Amir's work is part of an art historical tradition that has sought to create situations and environments for public participation and social engagement. This tradition spans theater, visual and the performing arts but has been plagued by ethical and aesthetic concerns. Too many of these performances rely heavily on the audience member as participant. They depend on socio-political issues to provide content and form and are built of too loose or too rigid structures that allow for participation in name only. Too often a sense of awkwardness accompanies participating in such performance art. The above story about why I chose the word "Awkwardness" describes precisely my uneasy anticipation of these symptoms (and the events that might transpire).

Risky and life-threatening art historical performances have, by now, gained legendary status and contemporary art audiences are no longer shocked at some of the same provocative, grand gestures of yore. Today, performance art takes place in tightly controlled environments such as museums, biennials, and art fairs. Performances are so restricted by legal counsel and liability insurance, that no one is really afraid of things escalating to an unpredictable, climatic state. Perhaps because performance art is currently basking in the limelight, artists aren't as interested in harassing, and as a result alienating, the audience member as much as in engaging her into highly structured, but open-ended, situations involving multiple other participant-audience members.

In "Our Best Intentions" there are no cameras, even though the setting is reminiscent of a reality TV show; it's closer to theater but there isn't another audience outside the participants themselves; and dramatization and connectedness are achieved through narrative and group therapy, through play, interpretative movement and ambiguity. The total immersion and complicity of the audience as performers in this structured but undetermined situation appear not merely as a tool towards a transformative and cathartic experience, but also as the aim itself. The pathos of traditional theater is present but the speakers are the spectators themselves (actors of their own stories). Knowledge resides within them; it is not being transmitted to them.

"Our Best Intentions" was one of two performances I attended at last year's Performa 13. I also participated in Pedro Reyes's "People's United Nations" (pUN) at the Queen's Museum. In Reyes' performance, I wore a tag that bore my name and that of the country I was born in. In Amir's performance, I could be identified only through the word on my vest. pUN stretched over two days and included time for socializing, when we weren't conscripted in activities and games based on improv comedy, therapy sessions, and team-building exercises -- conflict resolution by other means. But it was bogged down by time wasted on instructions and the management of over 130 participants. A tight, and rather lackluster program of events that heavily depended on prompts, directions and their repetition left little room for humor, play or much substance about any of the serious topics that were brought to bear. Personal, national, and global stories were shared and solutions offered in earnest, but I got the feeling we were all just awkwardly going along with it, rather affectatiously. This all must have seemed even more humdrum to museum visitors.

Where Amir's efforts succeed is in the creation of an intimate, familiar, but curious setting for a group of strangers to share personal stories, emotionally connect, physically interact, play, perform actions, and ultimately perform the self. There is a structure in place with a strict tempo and strong direction, but these don't overwhelm or define one's experience. The lighting, sound effects and rhythm between the scenarios create an ambiguous mise en scène and sequence of actions that produce the heightened sense of awareness, curiosity and disposition necessary for participation. Participants in "Our Best Intentions" are both active participants in a collective performance as well as what would be otherwise be considered passive viewers. By making room for both of these types of participation, without privileging looking over action, interpreting over making, Amir dismisses the opposition that most other performance art makes and attempts to upend and create a space where these two forms can co-exist on equal footing.