If you search for Awol Erizku online you will find a photographer who spends as much time in front of the camera as behind it. From his Tumblr or photo journal, the recent Cooper Union grad looks more like a rising star or socialite than a fine artist -- and he has the namedropping skills to match. Documenting the rising hip-hop sensations A$AP Mob and citing famed professors like they were treasured baseball cards, Erizku treats the cultural landscape as a game that he is winning. But beneath the hype, the Ethiopian-born, Bronx-raised artist possesses a strong vision of a future where black artists have their place in art history, and Erizku is seeing to the fact that he will be named among them. 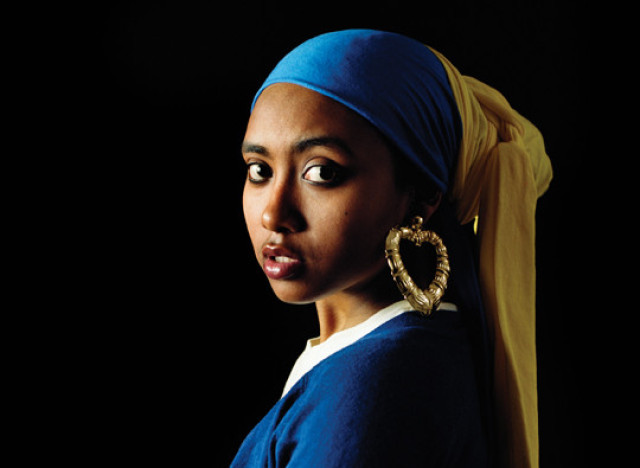 Erizku scouts models online and on the streets to sit for classical portraits, and his images often riff off art history's most renowned nameless women. "Girl with the Pearl Earring," for example, becomes "Girl with the Bamboo Earring," and "Lady with an Ermine," becomes "Lady with a Pitbull." Leopard print and Louis Vuitton replace fur stoles and family crests. What saves the works from falling into a formulaic gimmick is their cinematic intensity; it's not surprising that Erizku began his artistic career in film. The models are removed from the present moment yet still float somewhere between their contemporary garb and the historical ghosts they inhabit. There is an honesty to their expressions despite the fact that we're staring at pure fiction. We spoke with the 24-year-old artist about his recent solo exhibition at Hasted Kraeutler. Scroll down for images. 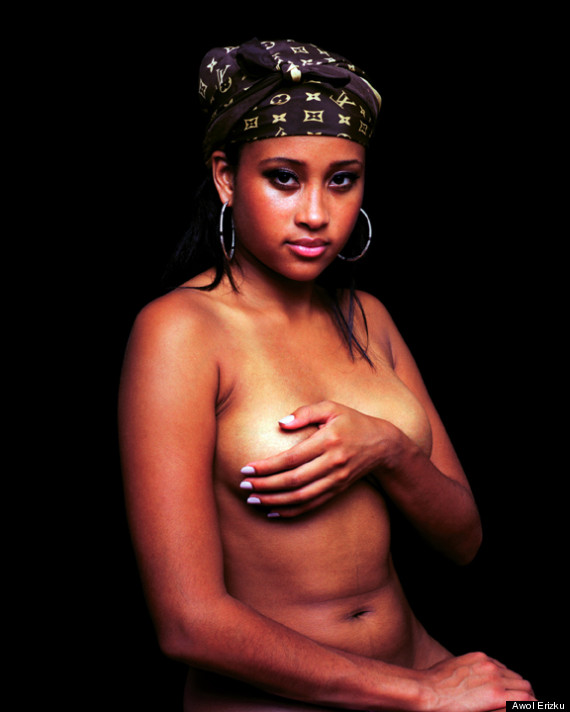 HP: Your work addresses the lack of diversity in classical art. Do you think the contemporary art world has evolved to be more diverse or do we still have a long way to go?

AE: I think it definitely has a long way to go. And that is something that I've been contemplating as well... how that is going to happen. It's one thing to make work as an artist and hope people understand why the work is being made and hope other people catch on. That museums and galleries see what artists like myself and Hank Willis Thomas and Kehinde Wiley are referring to. But it's another thing for artists to make it a ubiquitous kind of thing, so there is no longer a distinction between African American art and art in general. That's why I started making the art that I make.

HP: Why the black backdrops? What effect were you going for?

AE: Not really an effect... Black is a very powerful color. It's not loud, though it can be. It is only about what is there, what is in front of you, which is the black figure, and their expression which is about power and beauty. I think black allows me to control my subjects in that matter. Black is also something that can reference power and layers on the concept of putting black figures in light. It looks like they are emerging from the black background. Also, it's kind of like my touch.

HP: You have spoken less than favorably about the current notion that everyone is a photographer. But you are active on Tumblr, mixing and matching art, fashion and party photos frequently. How do you see the art realm and the social media realms interacting?

AE: I think anyone nowadays can pick up a decent resolution camera and shoot anything, put it up on their Tumblr and consider themselves a photographer. I am speaking not necessarily an elitist but someone who wants to study the traditional methods of photography, dabble in the dark room and make plenty of mistakes before I can make one decent exposure. I think if you are going to consider something you make, especially with photography, art, then you should at least understand the bare minimum.

Going back to the original question, I used to have my more serious work on my website but I am still going through this phase of asking: what does this all mean? What does social media have to do with the artist making work and people having unlimited access to the artist?

For me to go from being a student and studying these artist, to appearing as someone up-and-coming in their realm is due to the social media. Though I don't consider it the same, it is a documentation process. It allows me to archive all the stuff that is happening in my life. You can see when in my life I meet new people. When they appear again, and you see them in my final work. It is my journal and it is a visual diary of what is happening in my life. I think it is too pretentious for me to say everything you make is an artwork.

HP: Are you trying to make the artist less of a behind the scenes figure and more of a persona? How does the idea of the celebrity influence your work?

AE: I can't help the fact that I came up under David LaChapelle, who was always shooting A-list celebrities. Whether I like it or not, it has an effect on me. Being around people like Lorna Simpson, Christine Osinski and so many other people that I studied under at Cooper Union, they all have some kind of celebrity status. I find myself gravitating toward taking a class by artists who have some sort of recognition.

The whole social media thing, especially working in photography or media, if I am putting photographs out there and people are following it, I don't think I am trying to be a persona but the people who are interested in the work will see me that way anyway. I am not seeking it, but it is possible. But then again I have followers on Instagram who have way more followers than I do; they're not celebrities but they have this huge following. Social media right now is booming, and no one knows what is happening. So I think everyone is just kind of having fun with it.

HP: How do you see your exhibition interacting with Kehinde Wiley's "Economy of Grace"?

AE: I read this review of his on ArtInfo that was criticizing how there is a formula for him, or he has made a formula for himself. Kehinde is someone who I call a friend now and he is someone who I had to pay attention to while I was in school. A lot of people directed me to look at his work and I didn't want to but this year I finally started paying more attention, to understand where I fit in in history. I think on the major level I think we both speak the same language but we are saying two totally different things. I would lean toward that review in ArtInfo. It seems like Wiley is working in a terrain he is familiar with, the background is painted with this elaborate decorated motif. You have a black figure in this high Renaissance pose... With me it is a collaboration between me and the person who sits in for me.

I don't tell the person what to wear, how to be themselves. I might come across a person on the street or on Facebook or whatever, and I would approach them and say you have this look that I am drawn to. And from there I would ask them what they like, and get to know them a little bit. Then based on the information I gather from them I ask them to sit in for me and however they come dressed is how I photograph them. Often times I reference a painting as a catalyst, and that might result in them taking off their clothes... or whatever the case may be. But they're not, like, naked. They're in the nude. And those are two different things for me. For me, I want the person to still be there. It might serve as a portrait, it might serve as a work of art, I hope it serves as both. What that reviewer was saying about Wiley's work is that you don't get a sense of their personality in the portraits. I think that is the only difference between them that I can draw.

Awol Erizku's work will show at Hasted Kraeutler in New York until July 20.