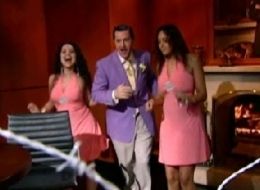 Gimmicks are doing a good job of replacing writers on The Colbert Report, if last night's interview with Lou Dobbs is any indication. Colbert turned the interview on its head with a hilarious conceit of interviewing Dobbs as his Spanish-language counterpart, "Esteban Colberto." Did hilarity ensue? Oh yes — including an in-studio barbed-wire fence, which Dobbs viewed with approval: "It's very impressive, and better than some of the fence along our border now!" Dobbs seemed to be taking it all in stride and enjoying himself, which — update — makes much more sense now that I know Colbert & Co. had dubbed in the answers from Dobbs' Jan 2007 interview. (I admit to having been fooled). Ah well, that's two plugs for Dobbs' book, The War On The Middle Class — he shouldn't be too fussed about it. Though it certainly explains why Dobbs' Spanish was so good. Either way, dancing girls! Clip and gratuitous screengrabs below, courtesy of Comedy Central. We think Colbert rocks a purple blazer almost as well as Cindy McCain. High praise, that. This post has (obviously) been updated...not unlike the Lou Dobbs interview from Jan. 2007. In any case, watch and enjoy the video below. P.S. "Con Cerca" means "with fence," we hope. 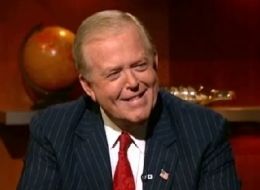 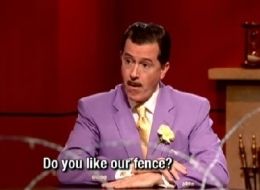