On the streets of his bombed-out neighborhood, Ayham Ahmad plays a battered piano and sings the stories of Syria’s war.

Four years of conflict have brought his hometown of Yarmouk -- a Palestinian refugee camp on the outskirts of Damascus -- to its knees. Like many Palestinian camps around the region, Yarmouk had evolved into a built-up neighborhood over the years, home to rich and poor alike. Now, its streets have been reduced to rubble by fighting between rebels and regime forces. A government siege has left the few remaining residents at the mercy of starvation and disease.

For over a year, Ahmad has played songs about these struggles amid the ruins of Yarmouk. "I had run out of ideas about how to help, so I decided to take my piano out into the alleyways and play songs to lift people's spirits," he told The WorldPost. 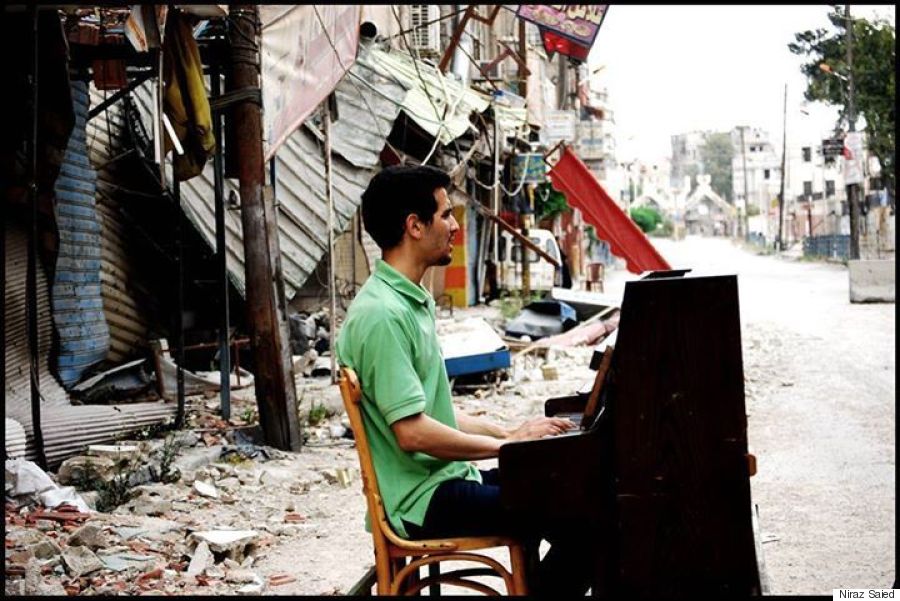 At first, bystanders seemed startled and sometimes amused by the street pianist bashing out notes to the tales of their struggles. Then, youth in the camp started asking to join him. "The songs that we sing touch everyone in Yarmouk, because it narrates the suffering they experience every day: the spread of disease, the lack of medicine, the scarcity of food, even about eating from the garbage," he said.

Ahmad now leads troupes of amateur musicians, young and old, who create and perform songs about life in Yarmouk. They have posted dozens of homemade music videos online, hoping to attract the attention of a weary world to Syria's ongoing conflict.

Their first songs were written for the thousands who had fled Yarmouk. Before the war, the camp was home to an estimated 800,000 Palestinians and Syrians, according to Palestinian-Syrian writer Nidal Bitari. Now, just 18,000 people are thought to remain, many of them too frail or impoverished to flee. "This music gives hope to those who have been displaced from the camp," Ahmad says.

Oh Displaced, Return "Oh displaced people, return. The journey has gone for too long. Yarmouk, we are part of you and that will never change."

Yarmouk's abandoned homes and divided families are mirrored all over Syria. About half of the population has been displaced, many of them forced to flee several times during four long years of war.

Palestinians living in Syria -- over a half a million at the start of the conflict -- often have fewer places to go. Neighboring Lebanon and Jordan have effectively closed their borders to Palestinians fleeing Syria, according to the U.N.

Both Palestinians and Syrians have taken extreme risks to leave the country, including on shoddy boats peddled by smugglers on the Mediterranean Sea. "Such sadness for those who fled, risking their lives at sea," Ahmad sings in a song to the displaced. "Some were killed and will never reach safety."

Yarmouk Misses You "Mother, I’ve really missed you Come back and ease our minds with your tenderness My mother, you’ve been gone for a while, We’ve really missed you laughter Let’s all come back to the house and remember when we were young Play on the roof and hide behind the walls Yarmouk’s eyes are crying, and it asks why did my people leave me?"

Yarmouk was established in 1957 to house Palestinians who fled wars in Israel. The camp grew into a bustling suburb of Damascus -- both the largest Palestinian community in Syria and home to hundreds of thousands of Syrians.

Palestinian refugees historically faced less discrimination in Syria than other countries in the region, but remained keenly aware that their survival depended on the whim of the government, as Bitari explained. As protests swelled against the rule of President Bashar al-Assad in March 2011, most Palestinians desperately tried to stay neutral. Yet, they came under growing pressure. Pro-regime groups tried to tighten their grip on the camp, while opposition forces eyed Yarmouk as a strategic launching post for an assault on Damascus.

In December 2012, the conflict finally engulfed the camp. The Syrian government bombed Yarmouk for the first time, killing dozens of people who were sheltering in a mosque. Rebel groups swiftly stormed the neighborhood, unleashing full-scale warfare on Yarmouk's streets.

Ahmad had returned to the camp in 2012, when the war forced him to abandon his music studies in the western Syrian city of Homs, the cradle of the revolt against al-Assad. The violence followed him to Yarmouk, but he decided to stay despite the dangers and continue studying the piano at home, he told Qatari newspaper Al-Sharq.

"Our choices are limited and bleak inside Yarmouk -- we either have to join one of the parties supporting the conflict or wait for death; I say it's better to be singing while waiting for death," Ahmad said in an interview with Syria Deeply. “The message I wanted to convey is that the people of Yarmouk are civilians. They love, adore and listen to music. They’re merely people who want to live in peace, not in war.”

As fighting escalated in 2013, those left behind were surrounded on all sides by government forces and the rebels. Food and medical supplies dwindled. By July 2013, the Syrian government put Yarmouk under total siege. In a brutal tactic, replicated around the country by the regime as well as some rebel groups, Yarmouk's population was trapped and left to starve.

That November, a 4-year-old boy was the first to die from hunger, activists said. Since then, the U.N. reports that over 100 people have died of starvation or hunger-related illnesses in the camp. Many residents have resorted to eating plants. A Muslim cleric in Yarmouk ruled in 2013 that people were permitted to eat cats, dogs and donkeys.

In January 2014, the U.N. was able to negotiate a rare delivery of aid. Rumors of food parcels brought thousands of gaunt residents flooding onto the streets, a scene captured in images that are now emblematic of the conflict. Aid workers saw one malnourished woman waiting for food collapse and die in front of their eyes, according to The Guardian.

The U.N. struggled to continue bringing aid in during 2014, their deliveries often canceled or turned back by authorities. Ten days ago, they were able to deliver food and medical aid for the first time in three months.

With both food and medicine scarce, health conditions are dire. The U.N. reported that there was a major outbreak of typhoid in 2014. Medics recently found over 100 cases of jaundice in the camp. 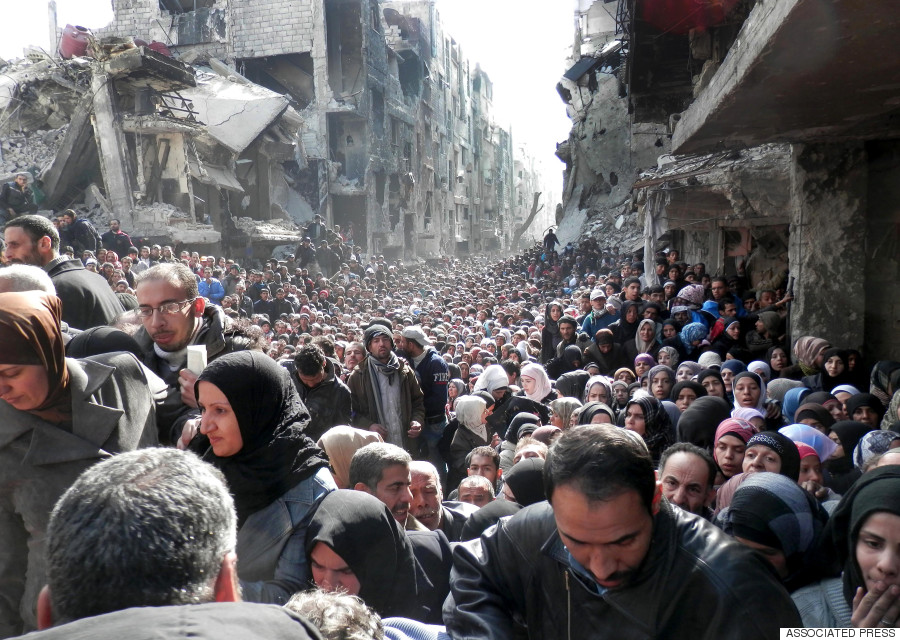 It was at this moment, in early 2014, that Ahmad started his open-air recitals. "The piano is a symbol of high culture ... to play piano in the streets, this conveys both magnificence and hardship at the same time," he explained. The piano has the added benefit of not requiring electricity, which has been cut in the camp since the siege began.

Ahmad has played the piano since he was 6 years old. His father, Ahmad Ahmad, is a well-known violinist and musical instrument maker who is also blind. "I am so proud of my father, who taught me music, and helped me get where I am today," Ahmad told The WorldPost. "He often accompanies our recitals on the violin, despite his age, his illness, and his hunger."

"Music is language of the soul. It needs no translation, but reaches all people across divides," Ahmad Ahmad told Palestinian newspaper Al Quds. "We are singing to awake the conscience of the world. One hundred people have died of starvation, and they are not just numbers." 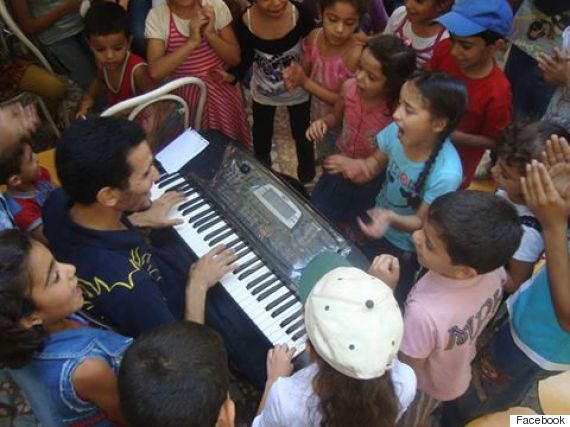 Ahmad's infant son -- who has spent a lifetime under siege -- also joins the recitals, along with many other children from the camp. Their favorite song is about the lack of water, Ahmad told Syria Deeply. Yarmouk's water supply has been cut since September 2014, when pipes were damaged by fighting. "The words of this song represent the daily suffering of the children in Yarmouk, as most kids here go with their fathers to help them carry heavy gallons of water," Ahmad explained.

In recent months, it has been getting harder for Ahmad to play in public. Yarmouk has not been spared the terrible trajectory of Syria's war -- from popular protest, to armed rebellion, to an internecine war dominated by Islamic extremists and foreign fighters. Al Qaeda's Syria branch, the Nusra Front, controls part of the camp. Activists say Islamist militants have executed several Palestinians who they accused of insulting God.

"The Islamist armed groups keep banning us from playing music. Sometimes they say that the music is a taboo and we cannot play music because it contradicts with our religion, customs and traditions," Ahmad told The WorldPost. "But we will keep paying music and will make our voice loud so everyone, everywhere can hear us." Now, he mostly plays from the roof of his house.

On the other side, Yarmouk faces the Syrian regime's brutality. Last week, a founding member of Ahmad's band, Mahmoud Tamim, was seized by regime forces. Ahmad's brother Alaa is also imprisoned.

Yet, Ahmad believes he has a responsibility to keep playing. "I am speaking on behalf of starving people in the camp; I am speaking about the displaced people, and I am delivering the image of the daily suffering inside the camp," he said. "Al-Yarmouk youth band will sing, and sing, and sing."

Salam Yousef contributed to this report.