A recently released report from the Inter-American Human Rights Commission slams the Mexican government's version of what happened in Ayotzinapa. A body of independent experts (GIEI), appointed by the commission, rejects the government's conclusions about key elements of last year's attacks on unarmed students during which six people were killed and 43 forcibly disappeared.

The report outlines coordination between local, state, and federal police, as well as the Army during the hours of the attacks and cites official obstruction of justice in the months since the crimes took place. The families of the disappeared reaffirm the ongoing struggle and announce major mobilization on Sept. 26, the one-year anniversary of the state crime. 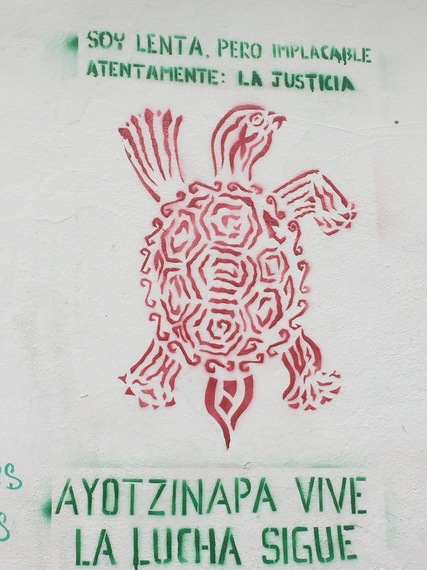 Here are 10 takeaways from the experts' 560-page report:

1) Yes, it was the state. The state's own police forces killed six people, and rounded up more than 40 on the night of Sept. 26, 2014. While the involvement of a (police-affiliated) drug cartel is alleged, it is undisputed that members of two different local police forces perpetrated this violence.

What remains disputed is the involvement of federal forces -- specifically the federal police and the military. The expert group says it found that the federal police detained one of the five buses the students were traveling in -- a claim denied by Mexican officials. The experts also found that the military participated in the monitoring of the student movements, and that members of military intelligence were present at two locations where the students were killed and disappeared during the course of the evening. 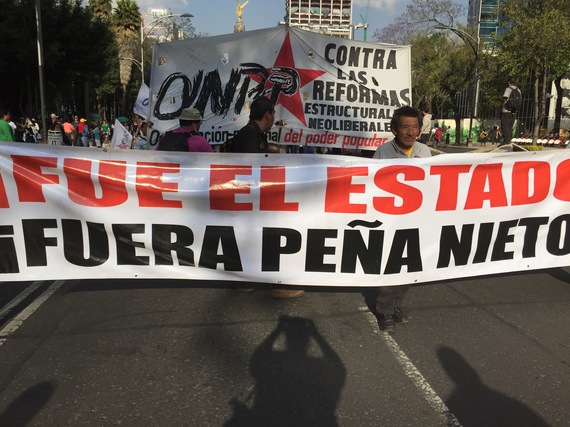 2) The students were stalked and then killed and/or disappeared by local police forces. When the students attempted to return to their school, about 90 minutes away, local and federal police forces allegedly blocked their exit and attacked. Police and military forces followed the movements of the students throughout the evening of Sept. 26; they are believed to have observed the students from the time they left their school at 6 p.m., until the local police purportedly first attacked them at 10 p.m. -- and until the attacks ended after midnight.

In one case, the students locked themselves inside one of their buses after being stopped and surrounded by the police. The police then broke off branches from nearby trees, broke the windows of the bus, and threw pepper spray and tear gas inside the bus. The students came out of the vehicles with their hands up, and were forced to lie on the ground. The municipal and federal police forcibly disappeared all the students on this bus, while military intelligence observed.

3) The attack was coordinated and sustained. It did not happen in an isolated burst of violence, but rather over the course of more than three hours in nine different locations.

The attack was not chaotic: different police and military forces regularly communicated throughout the night, and the expert group suspects that a policeman in downtown Iguala was issuing commands to the various participating groups. The records of communication from that group, called C4, went missing during the height of the attack. There are different explanations of why these records are missing: perhaps they were communicating on an encrypted network, or perhaps the Secretary of National Defense has control of those records.

At no point did municipal, state preventive or soldiers intervene to protect students or other civilians. In a widely-reported case, members of the military refused to help a student with a bullet wound to the face who had sought medical attention at a health clinic.

4) Students wanted to raise money and arrange for transport -- not disrupt a speech. The students had planned to peacefully commandeer several buses on the night of Sept. 26, and also to ask for donations from motorists along the highways.

The expert group reports that the practice of commandeering buses and fundraising from motorists "has been traditional amongst the different normales [rural teachers' colleges] in Mexico," and had happened for years generally without violence, arrests or legal charges being brought. Bus companies, in response to these practices, developed guidelines for their drivers: they pay them their salary during the time when their bus is taken over, and in turn expect them to stay with their bus.

Despite initial reports claiming the students wanted to disrupt the speech of the mayor's wife, whose brother is a leader with local criminal group Guerreros Unidos, her speech was in fact over before the students arrived in the town of Iguala. 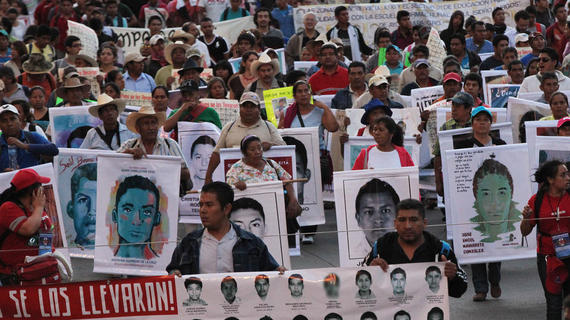 5) The state's explanation that the disappeared students were incinerated at the Cocula trash dump was demonstrated to be patently false, even scientifically impossible.

In January 2015, the then-Attorney General of Mexico, Jesús Murillo Karam, claimed that the state had solved the case: the "historical truth," he said, was that the municipal police had handed the 43 students over to the Guerreros Unidos criminal gang who then killed them and burned their bodies in the Cocula trash dump.

José Torero, a leading fire expert engaged by the expert group, said he found that the destruction of 43 corpses in an open air dump would have required many conditions that simply did not exist: more than 500 cords of wood or 100s of tons of tires; very high heat that would have scorched the surrounding earth and vegetation (they were not scorched); and a fire that would have burned for more than two days -- far longer than any of the "witnesses" claimed it had taken. In addition, such a large fire would have produced a plume of smoke hundreds of feet high visible for miles around. No local residents reported seeing such a thing.

6) The official investigation has been discredited by errors, lies, destruction of evidence and the likely use of torture to obtain testimony. It started when officials identified mass graves said to contain the bodies of the Ayotzinapa victims. Closer investigation revealed that those graves held other murder victims.

Then, as former Attorney General, Jesús Murillo Karam, sought to gain control over the politically-explosive case, the lies deepened and the story about the incineration of bodies at the Cocula trash dump (entirely based on likely coerced testimony) was presented as fact. That claim is likely false as is the entire edifice of the official story.

Faith in the authorities was further undermined by revelations that various CCTV video recordings made on the night of the disappearances -- which had been sent to the state investigators handling the case -- were destroyed. 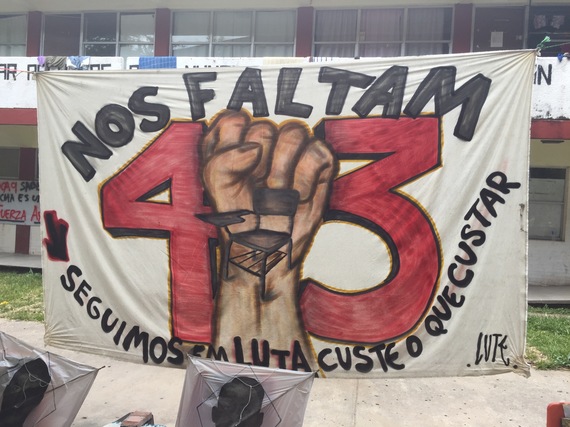 7) There is a widespread practice of state forces linked to the disappearance of civilians. Why did they think they could get away with this attack? Human rights groups have recently documented what they call "a cycle of impunity and violence." In this cycle, crime rates continue to increase as the justice system falls further behind in punishing those responsible for committing crimes, especially if those responsible work for the government. This impunity emboldens perpetrators to commit more crime. This cycle has landed Mexico at number two in a worldwide impunity index, and in a recent survey, Mexicans reported that a perpetrator had been indicted in only 7.5% of all crimes.

8) The whole case has had a devastating impact on survivors and families. The poor handling and dishonesty of the official investigation has added to the pain experienced by the families of the Ayotzinapa disappeared.

At the press conference held by the Ayotzinapa families after the GIEI report launch, Mario César Gonzalez Contreras, the father of one of the missing students commented that, "it became very clear that the garbage dump at Cocula was government theater....the [state version that our children were burned at the] dump has always tortured the families of the 43 disappeared."

9) The context of the war on drugs fuels corruption and violence. The state of Guerrero, like all of Mexico, has been deeply affected the drug war. Iguala, where the abductions took place is "an important place for heroin trafficking." The dynamics of the drug war have ensured the profitability of the illicit drug trade and frequently have led to the kind of state-criminal collusion seen in Guerrero. The GIEI report recommends further investigation of the possibility that one of the busses commandeered by the students was (unbeknownst to them) carrying a load of drugs. In the opinion of the experts, this might explain the unprecedented ferocity of the attack on the students.

If this theory -- that the students inadvertently commandeered a bus with drugs or cash -- is true, the implications about the nature of the Mexican state and U.S.-sponsored drug war are politically explosive, given that state actors committed the violence and led the cover up that ensued.

10) This case has fueled massive protests, and the report could reignite citizen outrage. Last fall, the Ayotzinapa case fueled a massive backlash against President Enrique Peña Nieto. Enormous solidarity marches took place across Mexico and around the world and Peña Nieto's standing tumbled. Peña Nieto survived with support from Washington, but this new report comes at a moment when his hold on power is further weakened by a falling peso, low oil prices, a resurgence in drug war violence, and the fact that he is entering the traditionally weaker second-half of his six year term. Representatives of the Ayotzinapa community who spoke at a press conference Sunday invoked the example of neighboring Guatemala where persistent street protests just brought down a corrupt president. 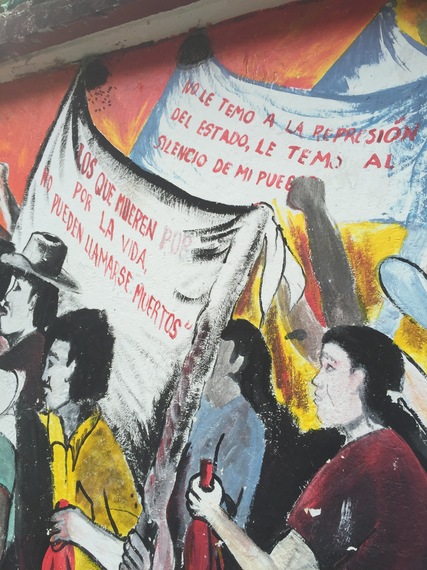 Janice Gallagher (who co-wrote this piece with Ted Lewis) is a postdoctoral fellow at the Watson Institute for International and Public Affairs. She works on issues of governance, human rights and violence in Latin America.