Talk about a killer gimmick.

An Arizona Republican fundraiser is offering as a prize the same type of gun used in the attempted assassination of Arizona Congresswoman Gabrielle Giffords.

On August 26 the Pima County Republican Party sent out its regular online newsletter, e-Tracks [PDF]. It contained your standard newsletterisms - an intro from the chairman, a description of local candidates, a calendar of upcoming events, and so on. But this particular issue also featured an eye-catching giveaway to raise money for GOTV (Get Out the Vote) efforts.

For just $10, readers can purchase a raffle ticket (out of 125 offered) for a chance to win a brand new handgun. Not just any handgun, but a Glock 23

Arizona Republicans surely know just how effective this particular brand of gun can be. After all, it was only eight months ago that Jared Lee Loughner used a Glock 19 in Tucson - the seat of Pima County - to shoot Congresswoman Gabrielle Giffords in the head. Giffords survived, but six other people, including a nine year old girl and a federal judge, were killed in the same shooting.

The raffle gun comes preloaded with adjustable grips, a case, and three 12-round magazines. Glock USA describes the model as "a slightly reduced size of a full-size handgun for easier concealment but still retains the performance on the level of a serious big bore."

The office of the Pima County Republican Party has confirmed that they are raffling the Glock.

The Arizona GOP has said it won't campaign to have Giffords removed from office before the 2012 election.

But at some point they're going to have to run somebody. So how do you field a candidate against a beloved incumbent who also happens to be a national hero?

"Many of us know Gabby and we're all praying for her continued recovery," PCRP vice chairman Mike Shaw told FoxNews.com. "The whole thing was horrible and that adds a lot of sensitivity to the seat."

Speaking of sensitivity - you have no idea how sensitive the trigger is on this sweet baby we're raffling! All the easier to fire those 36 bullets you'll get in those three magazines. Loughner only got off 32 shots. Think you can do better? Then give us your money.

Special thanks to Dawn Teo for the tip on this news item. This story was written as part of the Huffington Post's Off the Bus coverage of the 2012 election season by citizen journalists. If you would like to contribute to this project, sign up at offthebus.org 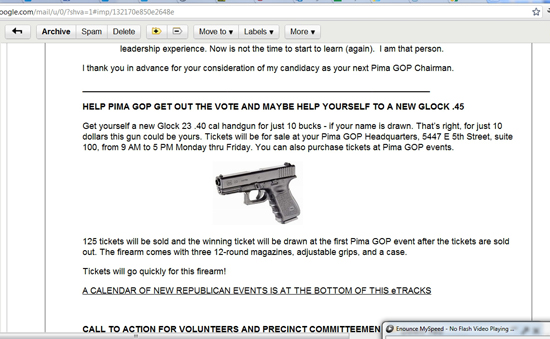