On a recent trip to Toronto, Canada to celebrate World Animal Day with Jill Robinson, Founder and CEO of Animals Asia I first went to a protest organized by Toronto Pig Save, a group founded by Anita Krajnc. This wonderful grassroots organization is made up of compassionate people who are devoted to saving pigs from being tortured and slaughtered for food. They focus on Quality Meat Packers, a slaughterhouse located near downtown Toronto, the horrific and pungent stench of which fills the local neighborhood. If residents and others could also hear the unrelenting squeals of pain and bear witness to the incredible inhumanity of killing these pigs I'm sure many would do something to end the horrific practice of turning live sentient pigs into ham, bacon, and sausage.

I like pigs. A few years ago I had the great pleasure of meeting Geraldine, a rescued potbellied pig, on a visit to Kindness Ranch, a sanctuary that rescues and rehabilitates former laboratory animals. Geraldine behaved as a companion dog, leaning into me as I rubbed her back and flipping over on her back as I rubbed her belly. I couldn't imagine how anyone could do anything that would cause her to suffer. We can learn a lot of positive lessons from pigs about loyalty, trust, friendship, compassion, and love if we open our hearts to them. Calling someone a pig is really a compliment.

Pigs are very intelligent, highly social, and deeply emotional animals. They display many different personalities. There's even scientific research that shows that pigs can be optimists or pessimists depending on whether they live in enriched environments or places where there's continuous stress and suffering. Pigs are sentient beings who are capable of suffering incredible pain. They not only suffer their own pain, they also see, smell, and hear the pain of others. We grossly underestimate animal suffering and many argue that their pain is worse than ours in that they don't know when it's going to end, it's interminable, and they can't rationalize it. All they know is what they're feeling at the moment and it's endless psychological and physical abuse.

My encounters with pigs haven't always been as pleasant as my meeting with Geraldine. What I saw, smelled, and heard in Toronto when a truckload of squealing pigs stopped where we were protesting was deplorable and heart-wrenching. And, a few weeks before my trip to Toronto I was most unpleasantly surprised by a pig roast right on the Pearl Street Mall in my hometown of Boulder, Colorado. The guy running it proudly stood in front of a pig on a skewer inviting people to come see a pig and then eat her. When I heard him say to a little boy "Come see a pig that was killed this morning" I wondered what the boy would do when he saw the scorched carcass turning slowly over a fire. He looked briefly and simply said as he turned away, "That's a dead pig and I won't eat it." Another youngster exclaimed, "That stinks!" Good for them. Unfortunately other youngsters laughed at the rotating body, as did their parents. But often it was an uncomfortable, defensive laugh, and some people walked away and shook their head from side-to-side possibly because they just didn't want to see whom they ate in the flesh. Imagine if the pig were a dog. When some people learn that I go to China to work with Animals Asia in their moon bear rescue program they ask, "How can you go there, that's where they eat dogs and cats?" I simply say that I just left the United States where people routinely eat pigs, cows, chickens, and millions of other sentient beings.

You want a what?

Few people really know about the horrific treatment of the food they casually put in their mouth. I'm sure if you asked a youngster if they'd like a Babe, lettuce, and tomato sandwich it would stimulate a lot of discussion, one that many wish to avoid. I'm also sure if you ordered a Babe, lettuce, and tomato sandwich at a restaurant the incredulous waitperson would ask, "You want a what?" Paul McCartney once said, "If slaughterhouses had glass walls, everyone would be a vegetarian." He's right. One could no longer dismissively say, "Oh I know they suffer but I love my bacon."

The words we use to refer to other animals often distance us from who they really are. Dead pigs are called ham, bacon, and sausage and dead cows become meat, steaks, and hamburgers. They're wrapped in packages that make it impossible to know who they used to be. Carrie Packwood Freeman, who teaches at Georgia State University, points this out in "This Little Piggy Went To Press." (See this also.) Kids usually don't know that their bacon, lettuce, and tomato sandwich is really a Babe, lettuce, and tomato sandwich and when they discover this, and that a hamburger used to be a cow, most are surprised and some refuse to eat them. It's important to refer to animals as who they are but I'm sure restaurants would never put "pig, lettuce, and tomato" or "cow on a bun with fries" on their menu.

As I was standing at the Toronto protest a truckload of pigs (see accompanying photos) going to market appeared and the stoplight turned red just as the truck showed up. For the next few minutes I stared into the eyes and faces of pigs on their way to being killed for unneeded human meals. Transport is part of the highway of torture. After being raised on cramped and filthy pig farms they're loaded on to a truck for their inhumane trip to the slaughterhouse where they're brutally and mercilessly killed. On the crowded truck and before they're slaughtered they're unrelentingly terrified. When I looked into the eyes of the pigs I could feel their pain and panic. Their ears were flopped forward, their faces drawn, and their unrelenting squeals of protest pierced the air. The cacophony of protests brought tears to my eyes. Their behavior pierced my heart. How could anyone do this to these amazing beings? I could hear them asking to be freed from this reprehensible treatment. If these pigs were dogs I'm sure people would vehemently protest their treatment. 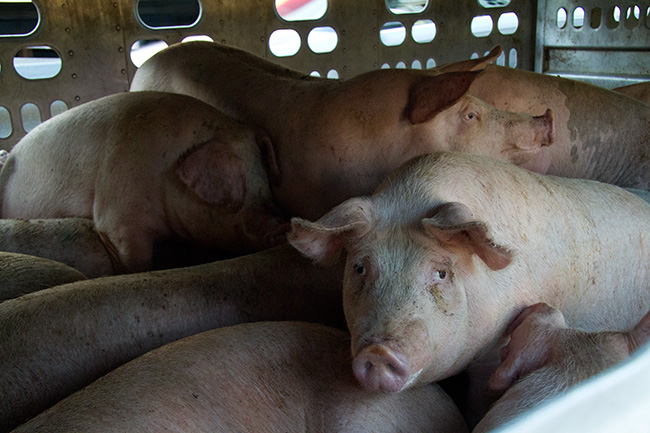 Most people don't know the plight of the animals who they eat. We must remember that when an animal is on a plate it's a matter of who's for dinner, not what's for dinner, as food animals are formerly sentient beings who were unnecessarily tortured and killed for our palette.There's no reason at all to eat pigs. Indeed, there's no reason to eat other animals. We can all easily expand our compassion footprint by making more humane choices concerning who we eat. It's simple to do and I humbly ask everyone to remove pigs and other animals from their diet. This is not a radical move. Simply say "no thanks" when someone offers you one form of animal or another. If you actually saw, heard, smelled, and felt, first hand, the incredible pain and suffering that food animals endured before they arrived on your plate, you'd be horrified and more likely to change your choices of food. You're essentially eating pain.

By bearing witness to the pain and suffering of other animals, to show that this is a true state of affairs, a social movement can be born. I know none of you would ever place your dog in the same situations, so why allow pigs and other beings to be treated in these thoroughly inhumane ways. It simply makes no sense.

Photos by Julie O'Neill, Photography for a Compassionate World.