As the Major League Baseball season began in the spring of 1922, George Herman "Babe" Ruth, the new captain of the New York Yankees, was the most famous baseball player, and one of the most famous people, in America. A Yankee since his move from the Red Sox in late 1919, Ruth had excelled as a pitcher since he was a boy, but became a national, and global, celebrity for his home run hitting.

Born in Baltimore in 1895 and, essentially, raised in St. Mary's Industrial School for Boys -- an orphanage and reformatory run by the Catholic Archdiocese of Baltimore -- Ruth had been a professional ballplayer since he was nineteen. As Ruth was beginning his career with the Baltimore Orioles, Francis Scott Key Fitzgerald, a year younger and named for his famous relative with a Baltimore connection, was finishing his freshman year at Princeton. Fitzgerald could read about professional baseball every day during the season in the student newspaper, where it was regularly covered. It was an easy train trip from Princeton for the undergraduates to road-trip down to Shibe Park in Philadelphia to see the A's play, or up to the Polo Grounds for a Yankees, or Giants, game. Sometimes, the majors came to campus. In the spring of 1915, the whole Princeton student body turned out to see their varsity team play the Yankees -- who crushed their hosts 11-2. 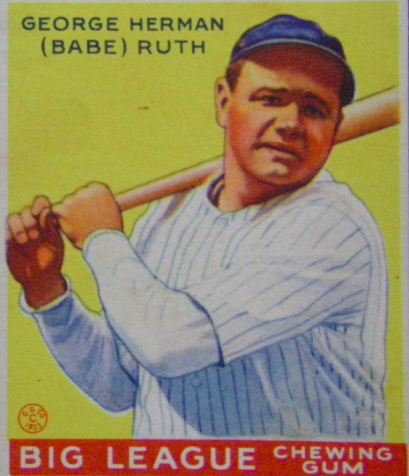 Scott Fitzgerald came to Princeton hoping to be a football star, though he never was. He loved both football and baseball, and much has been written about his liking for football -- particularly Ivy League teams -- but little about his liking for baseball. A flashpoint moment in The Great Gatsby is Gatsby's cool announcement to Nick Carraway that Meyer Wolfshiem, with whom they've just had lunch, is "the man who fixed the World's Series back in 1919." Nick, all-American Midwestern boy Nick, is stunned. "It never occurred to me that one man could start to play with the faith of fifty million people -- with the single-mindedness of a burglar blowing a safe."

In 1919, two teams from what Nick Carraway would call "my Middle West," the Chicago White Sox and the Cincinnati Reds, met in the World Series. Eight of the White Sox either took money supplied by the gambler Arnold Rothstein or knew about the fix, and let the Reds win the Series. The "Black Sox" scandal resulted in those Chicago players, including Shoeless Joe Jackson, being banned forever from Major League Baseball -- "eight men out." During this dark year for the great American game, however, Babe Ruth hit more home runs, had more runs batted in, and scored more runs than anyone else. In 1918, Ruth had pitched the Red Sox to two victories as they won the last World Series they'd win until 2004.

Not many people know that Fitzgerald wrote a section for The Great Gatsby in which his characters decide, one hot summer afternoon, to go and watch a ballgame. Anyone who has read the novel remembers well the ill-fated trip to the Plaza Hotel, and the confrontation that takes place there, in chapter VII. Once upon a time, though, Fitzgerald had Nick, Jordan, Daisy, Tom and Gatsby decide to cool off at the Polo Grounds on that sweltering day. Yankee Stadium, soon to be known as "The House That Ruth Built," was still under construction at the time. However, the Yankees had been leasing the Polo Grounds as their home field for the past decade, sharing space and meshing road-trip schedules with the Giants, and now drew bigger crowds than their landlords, largely thanks to Ruth. In the autumn of 1922, the two New York "home teams" would meet at the Polo Grounds for an entire World Series, won by the Giants.

In a manuscript draft of The Great Gatsby that survives, the two cars full of overheated, unhappy people cross the bridge from Long Island on their way to see a movie. Tom pauses on the road to speak to Daisy and Gatsby, driving together in Tom's car. Tom walks back to inform Nick and Jordan that "We're going to a baseball game" because "Daisy says the movies are too hot." Accordingly, they cross the bridge and "split the city heat northward toward the polo grounds." Arriving there, Tom and Daisy have "a short fierce argument" while "a wild roar" from inside the park echoes the fact that something's happening there, too. Jordan behaves characteristically: she "retired to the shadow of the grandstand, where she stood eating an ice cream cone and talking to a little boy. If she would give him fifty cents, the little boy explained, he could get in to see the game." No, she doesn't give the little boy any money -- and neither does anyone else. Soon all five of our main characters are in their seats. Here is Nick's description:

"I enjoyed that afternoon... the smell of peanuts, and hot butter and cigarettes mingled agreeably in the air and someone was thrown violently from the bleachers for being drunk or sober or wrong, and a pitcher with an exquisitely eccentric delivery warmed up near us on the grass. The Chicago Cubs were the visiting team and Tom applauded with perfunctory patriotism whenever they hit safely or pulled off a good play. But when he urged Daisy to do likewise she answered that she and Gatsby were for New York -- after that he took no interest in the game."

Nick may have enjoyed the game, but it's Fitzgerald who knew all about it. The Giants' last regular-season homestand against the Cubs in 1922 was from September 13-15, and the Giants won all three games. New York had a heat wave while the Cubs were in town -- afternoon gametime temperatures for the last two days were both in the mid-80s. Did Scott, perhaps, go to one of the games? Or did he just read about it in the papers?

A reference to the Yankees lurks here as well. The game is a National League matchup between the Cubs and the Giants (though interestingly Fitzgerald doesn't use the name GIants, just "New York, which is the first name, if you will, of both New York baseball teams). Yet the pitcher warming up looks to me like Carl Mays. Mays, the pitcher with the most eccentric delivery in baseball played for the Yankees in 1922, and had been accused (though nothing was ever proved) of having been in on a fix of the 1921 World Series -- which the Yankees lost. Mays was a submarine pitcher with blazing speed, who also threw spitballs to great effect, and hated a batter crowding the plate. In 1920, Mays had sustained the horrible distinction of being the pitcher who killed a man. Mays's wicked, twisting high fastball hit Roy Chapman of the Cleveland Indians in the head as Chapman stood at the plate. Chapman died of a fractured skull the next morning in a New York hospital. Fitzgerald, like most of America, remembered those sad headlines, and it seems to me he's used the memory, translated onto the same ballfield a couple of years later, to color this hot afternoon full of foreboding. Fitzgerald removed this scene as he revised the novel, and continued to revise the climactic encounter between Gatsby and Tom (and Daisy) until The Great Gatsby was going to press.

Fitzgerald certainly knew his baseball. Of course, he knew about Babe Ruth. And he knew of the comparisons drawn between Ruth and Gatsby since the 1920s: both mythic men, symbolic of their decade. Did The Babe himself know about Scott Fitzgerald, or Jay Gatsby, though? I wonder. I wonder because of two great Gatsby touches to do with Ruth from the spring and summer of 1925. Ruth had a lot of time on his hands, then, because of a mysterious illness, though in this photograph from spring 1925 he looks both healthy and genial. During spring training that April -- only two weeks after Gatsby was published amidst much publicity -- Ruth passed out at a hotel in Asheville, North Carolina. He refused to be taken from the hotel to return to New York until he was supplied with pink pajamas. An odd insistence, and strangely reminiscent of that "gorgeous pink rag of a suit" that so annoys Tom, that figures so prominently in Nick's last sight of Gatsby alive. Then, at a St. Louis hotel in the heat of summertime for a couple of days, Ruth ordered up more than twenty colored, patterned silk shirts. When he checked out, he left them strewn roundabout the room. "They're yours," he told the bellboy who ran after him, arms full of beautiful shirts.

Perhaps The Babe, himself a poor boy on his own from youth, who found wealth and immortal celebrity in New York and far beyond, who lived not merely like a young rajah but as the Sultan of Swat, paged through Fitzgerald's novel after it had appeared that spring. Perhaps he found some kinship in its larger-than-life, self-created title character - even if Gatsby might have had a friend involved in fixing that 1919 World Series.