The brains of 3-month-old babies may not be fully developed, but they do possess some striking perceptual abilities that adults don't even have.

New research finds that 3- and 4-month-old infants have unusual visual skills, which allow them to pick out differences in images that adults can't see -- an ability that they lose around the 5-month mark.

Since these babies haven't yet developed perceptual constancy, a skill that allows us to recognize the same object as being the same in different environments and lighting, they are more able to notice subtle differences in images, such as illumination, according to the Japanese study, which was published in the journal Cell Biology in December.

Susana Martinez-Conde, a neuroscientist at the State University of New York, told The Huffington Post there's a perceptual narrowing that babies experience. "This means that when they're born, they're highly responsive to all sorts of variations in the world," said Martinez-Conde, who was not involved in the study. "As babies, we have all the capability to perform high-level discriminations. As we grow up, our discimination skills narrow and we are left with only a constrained range of the differences that we are able to appreciate."

Martinez-Conde reported in the Scientific American last week that the illusion of constancy is an evolutionary adaptation that helped early humans to survive by allowing us to identify important objects despite changes in our physical environment.

"At first we see all differences, and then we learn to ignore certain types of differences so that we can recognize the same object as unchanging in many varied scenarios," Martinez-Conde wrote in SciAm. "When perceptual constancy arises, we lose the ability to detect multiple contradictions that are nevertheless highly noticeable to young babies."

Here's an example, taken from the new study: Look at the three images of snails pictured below and try to pick out the two that look the most similar. While adults would typically see the glossier snails (A and B) as the most alike, a baby sees images B and C as being more similar.

As Martinez-Conde explains, while snails A and B look nearly identical to an adult, they have very different pixel intensity. However, infants can correctly determine that images B and C are the most alike.

For the Japanese study, the neuroscientists examined 42 babies while they looked at the above images rendered from 3D objects and measured how long the babies looked at each object. The researchers could tell based on how long the infants lingered on the image whether they thought it was similar to or different from the previous picture, because it's known that babies tend to look for longer at novel images.

"We can conclude or at least hypothesize that babies see the world in very different ways," Martinez-Conde said.

But lacking perceptual constancy isn't the only way that babies see the world differently. Other research has shown that babies also see colors differently, and seem to have some form of synesthesia.

A 2011 study published in the journal Psychological Science, recently resurfaced on The Gist podcast, found that babies tend to associate certain shapes and colors in a way that indicates synesthesia -- the experience of unusual sensory connections, for instance that might cause you to see numbers in colors or vice versa.

The study showed that 2- and 3-month-old infants showed significant shape-color associations. However, by the time they were 8 months old, the preference was no longer pronounced.

Only 4 to 5 percent of people are synesthetes as adults. This suggests that we may be born as synesthetes and most people lose this ability as they grow older.

PHOTO GALLERY
7 Things To Know About Babies
Download
Calling all HuffPost superfans!
Sign up for membership to become a founding member and help shape HuffPost's next chapter
Join HuffPost 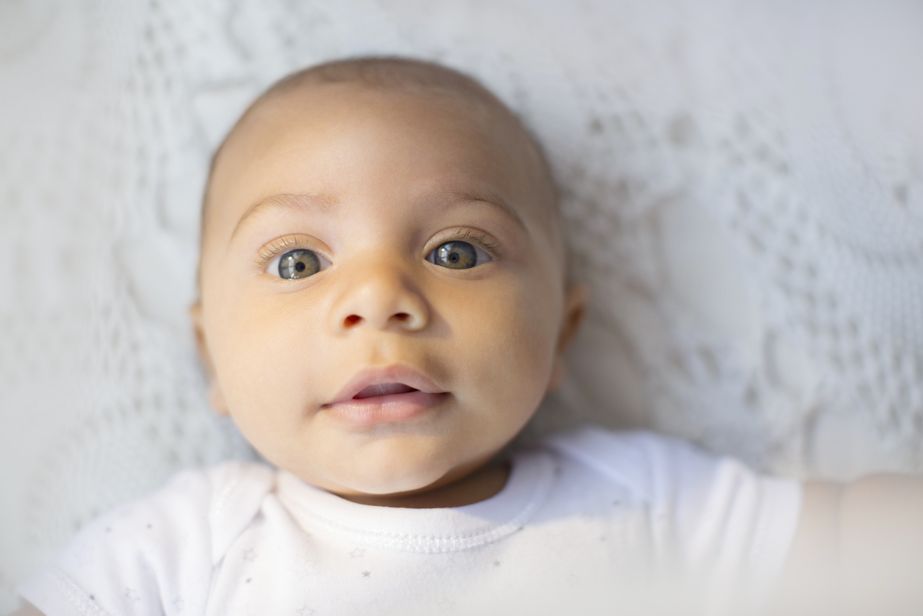 1 / 6
They Have A Sense Of Self-Control
<a href="http://www.theatlantic.com/health/archive/2014/10/when-do-babies-learn-self-control/381249/" target="_blank">A 2014 study published in the journal Cognitive Development</a> looked at 150 15-month-olds. The babies watched an adult demonstrate how to use several noise-making toys. Then, a second adult entered the room and angrily scolded the first for making so much noise. <br> <br> After the demonstration, the babies were welcome to play with the toys, but for half of them, the angry second adult left the room or turned away, while the latter half remained under that adult's gaze. <br> <br> Babies in the former group did not hesitate to start playing with the toys, but the ones in the second group generally waited a little bit and then played with the toys differently than they'd seen in the demonstration. This indicated that they were trying to adjust their actions to avoid the anger of the second adult -- therefore, they are able to resist their impulses and show self-control.