Infants as young as 2 months old already have basic knowledge of "intuitive physics," researchers report in a new study.

Most studies into infant cognition employ eye-tracking technology — psychologists can tease out what an infant is thinking and what she considers to be unexpected by following her gaze in different scenarios. This method, called violation of expectation, involves showing babies photos, videos or events that proceed as expected, followed by others that break everyday rules. If the infant understands the implicit rules, he or she will show little interest in an expected situation, but will stare at images of a surprising event.

But at what point in their development do babies begin to understand how the physical world works?

"We believe that infants are born with expectations about the objects around them, even though that knowledge is a skill that's never been taught," Kristy vanMarle, an assistant professor of psychological sciences at the University of Missouri, said in a statement. "As the child develops, this knowledge is refined and eventually leads to the abilities we use as adults."

To come to this conclusion, vanMarle and her colleague, Susan Hespos, a psychologist at Northwestern University, reviewed infant cognition research conducted over the last 30 years. They found that infants already have an intuitive understanding of certain physical laws by 2 months of age, when they start to track moving objects with both eyes consistently and can be tested with eye-tracking technology.

For instance, at this age they understand that unsupported objects will fall (gravity) and hidden objects don't cease to exist. In one test, researchers placed an object inside of a container and moved the container; 2-month-old infants knew that the hidden object moved with the container.

This innate "physics" knowledge only grows as the infants experience their surroundings and interact more with the world. By 5 months of age, babies understand that solid objects have different properties than noncohesive substances, such as water, the researchers found.

In a 2009 study, a research team (which included Hespos) habituated 5-month-old infants to either a blue solid or a blue liquid in a glass cup, which appeared to be the same when at rest. They tipped the glasses left and right, and poured the contents into other glasses, allowing the infants to form ideas about how the substances worked. Infants habituated to the liquid (but not the solid) weren't surprised that straws could penetrate it, but were confused when straws couldn’t penetrate the blue solid. The opposite happened with infants habituated to the solid.

Hespos and vanMarle also learned that babies have rudimentary math abilities: Six-month-old infants can discriminate between numbers of dots (if one set held twice as many dots as the other), and 10-month-old infants can pick out which of two cups holds more liquid (if one cup held four times as much liquid as the other). Also at 10 months of age, babies will consistently choose larger amounts of food — such as crackers — in cups, though only if there are no more than three items in any cup.

While infants appear to be born with intuitive physics knowledge, the researchers believe that parents can further assist their children in developing expectations about the world through normal interactions, such as talking, playing peek-a-boo or letting them handle various safe objects.

"Natural interaction with the parent and objects in the world gives the child all the input that evolution has prepared the child to seek, accept and use to develop intuitive physics," vanMarle said.

The study was published in the January issue of the journal WIREs Cognitive Science.

Copyright 2011 LiveScience, a TechMediaNetwork company. All rights reserved. This material may not be published, broadcast, rewritten or redistributed. 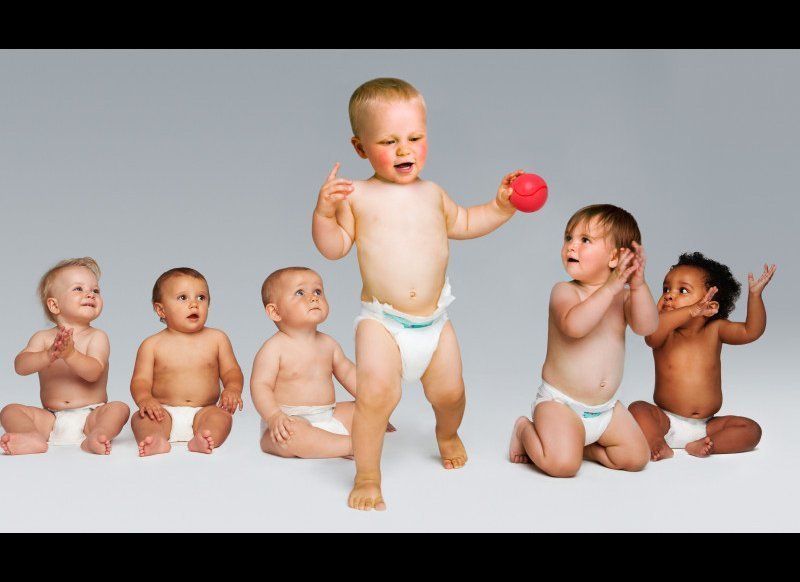