Between secret rendezvous, deleted messages and outright lies, people will go to great lengths to cover up unfaithful acts. But it now seems we aren't unique in our deception — gelada baboons also actively try to hide their infidelity, new research suggests.

"This kind of deception is common in our society, but it is so difficult to prove that any other animal does it," said lead researcher Aliza le Roux, a behavioral ecologist at the University of the Free State in South Africa. "Here's some evidence that we aren't alone in the world in this, and there are evolutionary roots to our behavior."

Gelada baboons (Theropithecus gelada) live in small units, which consist of up to a dozen females, a few subordinate males and a dominant male, who holds exclusive reproductive rights to the females. Geladas live in an open grassland habitat and typically produce loud vocal calls during mating, so the dominant male should be able to easily detect any infidelity and stop it from happening. But previous research showed that follower males sire about 17 percent of a group's offspring.

Given this fact, the researchers wondered if gelada baboons engage in a behavior known as tactical deception. "It's when you are doing something that's benefiting you — when you are cheating, basically — but you are actively doing something to not be discovered," le Roux told LiveScience. [See Photos of the Cheating Gelada Baboons]

Despite numerous anecdotal reports, tactical deception hasn't been systematically shown to exist outside of human society, le Roux explained. Instead, other studies have only documented functional deception, which happens when an individual grasps an opportunity that's presented. For example, long-tailed macaques are more likely to mate when potentially harassing bystanders aren't around.

To see if geladas take steps to conceal their unfaithfulness, le Roux and her colleagues observed the mating behaviors of 19 reproductive units living in the Simien Mountains National Park in Ethiopia. Between January 2009 and December 2011, they recorded 939 within-pair copulations (occurring between a dominant male and one of his females) and 93 extra-pair copulations (between a subordinate male and a female).

They found that cheating geladas were more likely to copulate when they were at least 65 feet (20 meters) away from the dominant male, a behavior similar to what was seen previously in macaques. However, geladas took an extra step to hide their infidelity: They kept quiet. The baboons were much less likely to vocalize during extra-pair copulations compared with within-pair copulations, suggesting their deception is tactical, not opportunistic, le Roux said.

The researchers also found that dominant males "punished" those caught cheating. About 20 percent of all extra-pair copulations ended with the dominant male rushing the couple, trying to bite them and showing other acts of aggression. But the punishment had little long-term effect, with the majority of cheaters quickly going back to their bad habits. "There was no change in their behavior, which is a little bit of a pity," le Roux said. 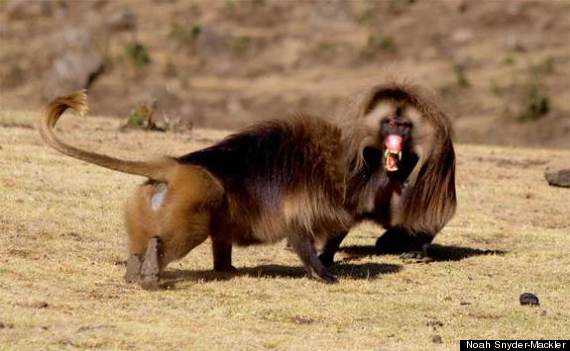 Two adult male geladas get into a loud fight over access to females. In the treacherous terrain of the Simien Mountains National Park these fights can sometimes be deadly.

"This topic is important, since it will shed a light on the evolution of human cheating and punishment," Liesbeth Sterck, a behavioral biologist at Utrecht University in the Netherlands who was not involved in the study, told LiveScience in an email. However, Sterck said, the study shows no more proof of tactical deception than her own work with long-tailed macaques, and the gelada's apparent tailoring of vocalizations could just be a learned behavior.

But le Roux thinks it's more likely the cheating geladas are taking into account the visual and acoustic perspectives of their leaders. And given the anecdotal reports, this behavior could be widespread. "I'm sure it happens in quite a few other species, and not just primates," she said.

The study is detailed online today (Feb. 12) in the journal Nature Communications.