When you become a parent, you spend a lot of time filling your head with strange acronyms and code. VBAC, for instance, means delivering a baby vaginally after you've already had a C-section. The 6 S's is some B.S. that's allegedly guaranteed to make your kid sleep like an angel. DH (when used on message boards) means "dear husband" (I assume sarcastically). And a good one that's made the rounds recently is the CTFD method of parenting (as in, Calm the F Down, and that applies to parents, not kids).

I've been using one with my friends that I invented that is in a somewhat similar vein. I used it yesterday and someone said they wished it was Googleable, so here it is: JBBB. It stands for Just Babies Being Babies. Why does my son sleep for 20 minutes one nap and three hours the next? JBBB. Why does he love grapes one week and then scream and throw them on the floor the next week? JBBB. Why does he say the word "thank you" so cutely 3,000 times in a row and then stop when I take out my camera? JBBB. Why does he act like I'm trying to slowly torture him when I'm just trying to get him three blocks home in the car? JBBB. JBBMFGDB, man.

It's probably just a matter of convenience, but it truly helps me to remember that babies and young children are, basically, tiny insane people who make absolutely no sense. This is where JBBB comes into play. It's both an explanation and a comfort. Your kid's a snot-nosed, screaming, destructive, uncooperative, unrestful piece of crap despite your best efforts to engage, encourage, comfort, nurture and guide him? Whatever, dude. Have a beer. JBBB. Say it out loud. J.B.B.B. What can you do? Not much. J to the B to the B to the final B. It will set you free. 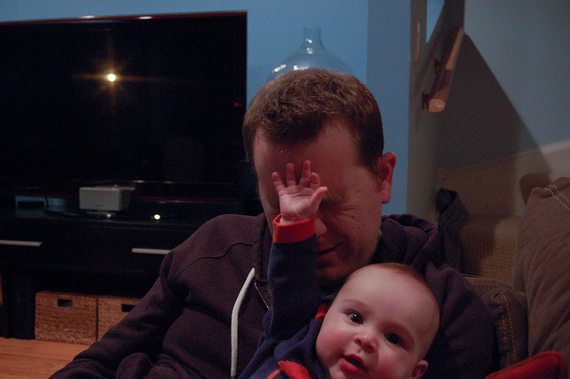 Seven Things You Didn't Know About Babies
More:
parenting adviceBabiesParentsparents-babiesacronyms
Newsletter Sign Up
Raise the kind of person you'd like to know
Subscribe to our parenting newsletter.
Successfully Subscribed!
Realness delivered to your inbox