Neha Afreen was admitted to the hospital with bite marks, cigarette burns, and a dislocated neck after a brutal beating by her father, authorities say. The three-month-old's father wanted a boy, but 19-year-old Reshma Banu had given birth to a girl.

Afreen died in the Bangalore hospital, leaving a grieving Banu to pore over grainy cell phone videos of her happy baby.

"After my delivery my husband had come to see me and the baby. He said, 'It is a girl, why did you give birth to a girl?'" Banu told CNN.

Just days after the birth, Banu says her husband told her, "For her wedding we will require a hundred thousand rupees (about $1,800 dollars) for all the expense. If you can get that amount from your mother, then keep her, but if you can't, then kill her."

A week after being admitted to the hospital with multiple injuries and a severe head wound, "Baby Afreen" suffered cardiac arrest and passed away, BBC reported.

“When I came here, she was surrounded by men who are telling her to stop crying," Tabassum, a hospital staffer, told DNA India, referring to political leaders called to the mortuary.

"It's 2012 and yet, people have a gender bias. It is a shame. Reshma, your fight starts from today. This is the beginning of your life. There are many women who are suffering like you and you should become a role model for them,” Tabassum told Banu.

Hospital authorities informed the Child Welfare Committee of car painter Umar Farooq's alleged attack on his daughter Neha, and the department convinced Bano to lodge a complaint against her husband, according to the Daily Mail. She told authorities that Farooq abused her at home since giving birth to a daughter, but she had remained quiet, hoping to save the marriage.

In April, however, Farooq came home drunk and began abusing Bano again, she alleges. After she went to sleep, she claims Farooq stuffed clothes into the baby's mouth and struck her repeatedly with a blunt object, the Daily Mail reported. He fled after Banu woke up and found her baby spitting up blood and convulsing.

Farooq is now charged with the murder and is being held in judicial custody, according to the paper.

The Baby Afreen case has drawn widespread anger and the attention of women's and children's groups in India, where sex-selective abortions and gender-based violence frequently go overlooked or under-reported, as reflected in the United Nations' finding that India is the most dangerous country in the world to be a girl. As the Times of India reported, female children are 75 percent more likely to die than Indian boys.

"Largely this is from the point of view of mortality statistics for girls versus boys," gender gap researcher Dr. Anand Krishnan from All India Institute of Medical Sciences (AIIMS) told CNN.

"A boy is seen as a better investment. They prefer boys," he explained.

Neha Afreen, Reshma Banu's Infant, Murdered By Father Because 'It Is A Girl'
Reshma Banu Mourns Neha Afreen, Her Daughter Beaten To Death For Being A Girl 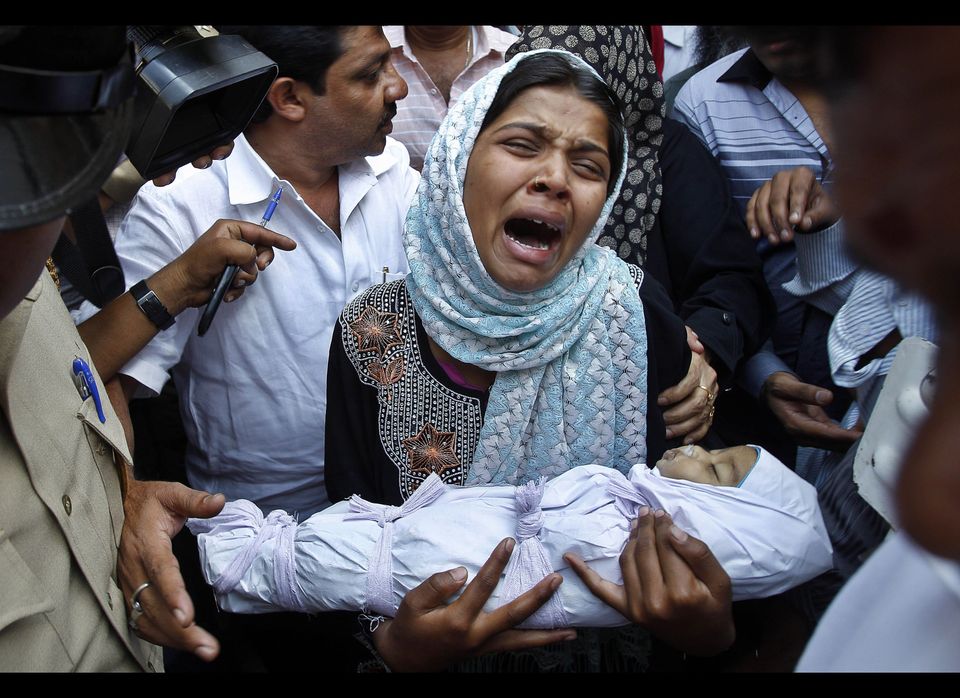 1 / 4
Neha Afreen, Reshma Bano
Reshma Bano wails as she holds the body of her three-month-old daughter Neha Afreen outside a hospital morgue in Bangalore, India, Wednesday, April 11, 2012. Afreen was admitted in the hospital on April 8 after allegedly being battered by her father for being born a girl. (AP Photo/Aijaz Rahi)
AP