A baby bodysuit with a woman's silhouette printed on the front has parents in Southaven, MS outraged. "Inappropriate" is what several shoppers said when Action News 5 interviewed them outside of Gordman's, the store selling the onesie.

Wild Child, a brand manufactured by Bon Bebe, sized the outfit for 18-month-old girls. But mom Cathryn McKee told the news station, "I just think that is a little ridiculous that you would put that on your child." One father who spoke on camera says he wouldn't let his daughter wear the "bikini" because "it gives people the wrong idea too quickly." 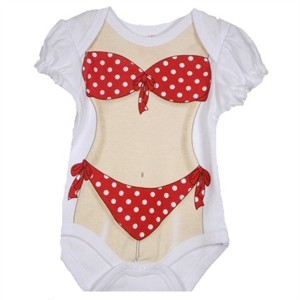 Commenters on the Action News 5 website were split. "It's vulgar [sic]," one posted. To each his own, another argued. "If you do not like, then do not buy it," John wrote.

The bikini onesie is only one of the Wild Child outfits on Bon Bebe's website with a questionable message. Another reads "Lock Up Your Daughters" with a graphic of a padlock printed underneath.

And, this isn't the first time parents have taken issue with children's clothing sold in their local retail stores. Last November, shoppers were horrified to find a pair of crotchless panties at 'Kids N Teen' in Colorado. A few months earlier, French brand, Jours Apres Lunes, sold a "loungerie" line for 3 to 36-month-old girls.

Some shoppers are not as turned off by the latest children's apparel in question as the moms and dads who reacted to these earlier infractions.

"I just don't take offense to that at all," mom Jeannie Stanley said when she was asked about the bikini onesie.

Baby Clothes That Just DON'T Make Sense On Babies
More:
Parentspollparents-babies
Newsletter Sign Up
Raise the kind of person you'd like to know
Subscribe to our parenting newsletter.
Successfully Subscribed!
Realness delivered to your inbox