My husband and I came by our predilections for working twelve hours a day honestly. We're Baby Boomers and must feel some vestigial responsibility to atone for our generation's earlier excesses with sex, drugs and rock and roll. Given our work schedules, it was a no-brainer that our two sons would be the only mammals invited to live with us.

We assuaged our guilt at depriving our boys of a dog by adopting beings of lower phylla. There was Redmouth, the goldfish our neighbors "forgot" to retrieve when they returned from a vacation. Redmouth was the kind of goldfish you take home from the school fair in a water filled plastic bag. He (or she) lived all alone in a quart size glass bowl, requiring only a daily pinch of fish food and a weekly water change.

Once we were a little late with this crucial task. Our boys were very upset to find Redmouth floating motionless on his side. Fortunately, their father was able to summon his skills as a critical care physician to revive him. Redmouth lived to the ripe old age of nine which must be a lot in school fair goldfish years.

Our next pet was Chuckie, a hermit crab. Like Redmouth, Chuckie was rather undemanding and not very interactive. One day when our then seven year old son, Jeremy, found that Chuckie had succumbed to something beyond his father's powers of resurrection, he came to me with tears streaming down his face. "Please can we get a pet with fur. They don't fall apart when they die."

We remained a pet free zone for ten years, until I announced my plan to semi-retire and write legal briefs from home. Upon hearing this news, Jeremy, about to become a high school senior, immediately reminded me that now we could get a dog. I explained that having a dog might put a crimp in my plans to travel -- not to mention the fact that he would be leaving for college in a year. Since we lived right outside Philadelphia, Pennsylvania and he was planning to apply early decision to the University of Miami, I pointed out the obvious. With him 1,200 miles away living in a college dorm, I would have to be responsible for the dog. Giving me the withering look that teenagers reserve only for their parents, he muttered, "I knew you would back out." 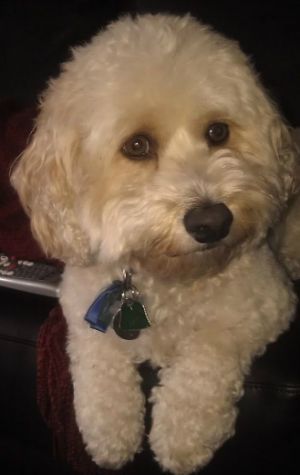 The parental guilt button having been expertly pushed, the next day found Jeremy and me at a local SPCA -- just to look. As we checked in at the counter and said we wanted to adopt a dog, I glanced to my right and there was Dino, an adorable six month old cock-a-poo (cross between a cocker spaniel and a poodle) , being "returned" at the other end of the counter. As Jeremy gave me a somewhat incredulous look, I said, "We'll take that one.

An hour later, after a stop at Pet Smart for dog food, a leash, a crate, a dog bed, and a dog toy Dino picked out, Jeremy, Dino and I arrived home. My husband, Steve, greeted us with stunned surprise. He had never expressly forbidden us to adopt a dog, but admittedly, neither had he been wildly enthusiastic about the idea.

Dino's belongings soon took over a good deal of the house. It wasn't long before our kitchen chair legs looked like a deranged beaver had chomped on them, all our throw pillows were disembowled, and who knew our shoes were so tasty. And speaking of "bowels", the SPCA worker's assurance that Dino was house broken turned out to be apocryphal. One day as Steve stepped over Dino's latest "accident", he announced somewhat hyperbolically (I thought) that Dino had ruined our home life.

I retreated unhappily to my third floor office where I gravely and tearfully concluded that Dino would have to be "returned". Steve worked very hard and deserved to have his home be a port in the storm. As I stroked Dino's soft, hypo-allergenic fur and looked miserably into his trusting, brown eyes, Steve entered the room. In what can only be described as a "Gift of the Magi" moment, I started to explain that I could understand his point of view and was resigned to parting with Dino, but he countered that he knew Jeremy and I were very attached to Dino and he would give him a last chance.

Dino has proved worthy. With Jeremy long gone, he keeps me company in our empty nest. He makes sure that I am up and out for walks in snow, sleet, rain, heat and gloom of night. After years of spending the daylight hours at my office, thanks to Dino, I finally met many of our neighbors, at least the ones who have dogs. 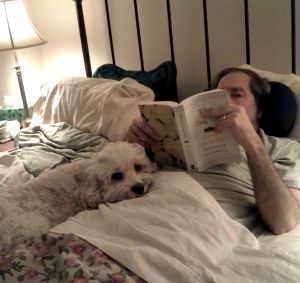 Even though I am Dino's primary caretaker, including dispensing his food, Steve is his favorite person. He lays by the front door in anticipation of Steve's return home from work and when he hears Steve's key in the door, he is simply besides himself with joy.Dino gradually earned the privilege of sleeping in his dog bed on our bedroom floor, but I knew he had officially joined our pack when one morning, I found him stretched out on our bed -- sharing Steve's pillow.