Boomers still "got some game" in their life and work and, unfortunately for Millennials who were poised to take the field, they have hit what I called the "gray ceiling" -- the inability of younger generations to be promoted and move up the organizational chart. 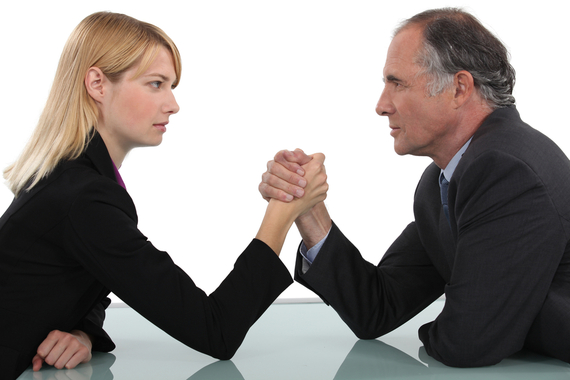 Don't worry, Millennials, Boomers can't live forever but for now, the apocalyptic silver tsunami that many economists predicted has rained on the workforce more like a sun shower. One day Boomers will finally retire completely, or at least slow down. But for now, the labor force participation rate for people 55 and older is near its highest level in several decades, up by approximately one-third since 1990.

A combination of delayed retirements, improving but still slow job growth, and increasing life expectancy has disrupted the once orderly exodus of older workers and the entrance of younger ones. A recent report by AARP finds that one-third (33 percent) of older workers are delaying the age at which they expect to retire and nearly half are now planning to work part-time after they reach retirement age. Economist Matthew Rutledge calls this the "the lump of labor": "There's only a certain amount of jobs out there, and if an old person's holding that job that means a young person isn't."

Millennials who complain, "It's not fair" are justified to some extent especially with all the hype pre-2010 when the first Baby Boomers turned 65 and the retirement floodgates were supposed to open. It's like an Olympian enduring years of practice preparing for the big event and at the last minute the event is cancelled. "Why can't you be like all the generations before you? Retire, play golf and bridge, go to the rest home, or die? It's our turn to play."

What does this gray ceiling mean for employers? For some it translates into complacency. Unfortunately, that's the absolute worst option management could choose. The longer a company can hold on to older experienced workers is a good plug for the brain drain but bad stand-alone strategy for future growth and sustainability. It just postpones the inevitable. Besides, complacency and procrastination nearly always backfire. What are better options?

Pay attention to Gen X
Companies must begin to recruit and hire and promote younger workers. Generation X, who has patiently been waiting, is next in line for management and leadership roles. With these roles at highest risk for turnover, enforcing the gray ceiling may force these heirs apparent to follow their dreams and careers elsewhere...and there are plenty of opportunities available.

Boomers Will Act Their Age -- Eventually
But succession planning shouldn't stop at the top. No position is immune from an unexpected job opening particularly in companies that have enjoyed long tenure by Baby Boomers and low turnover. Whether it's time off to travel, replace a hip, treat cancer, deal with an ailing parent or spouse, or just spend time with the grandchildren, Baby Boomers will eventually begin to act their age. The more physical the job (and this includes jobs that require a lot of travel or long hours) the more likely a Baby Boomer will be forced to cut back sooner than later.

All Good Things Come to an End
Finding new talent is just the tip of the iceberg when succession planning these days. While Baby Boomers may be the last generation that enjoyed 30 and 40 plus year careers at the same company, Millennials will seek multiple careers. For many young workers, five years in the same job is a lifetime! Succession planning isn't just a matter of finding more high-potential talent but dealing with higher rates of turnover.

Arghhh! The Dreaded Multi-Generation
Another insidious impact of the gray ceiling is that allows many organizations to avoid addressing the inevitable changes that are disrupting many company cultures. It is the event that sends chills up and down the spine of many managers. It's the dreaded generational gaps. As long as Baby Boomers stay put and replacement can be avoided, managers can avoid dealing with the multi-generation workforce.

But as sure as the sun will rise in the East tomorrow, every manager in every company will be faced with managing multiple generations. In some organization that could mean 5 generations working side-by-side -- Matures (also called Veterans), Baby Boomers, Gen X, Millennials, and Gen Z. This unprecedented generational smorgasbord is enough to turn even a Millennial's hair gray. From attitudes about work and career to vacation schedules to training and development, each generation has different needs and wants. Breaking down barriers and bridging gaps is no task for the faint of the heart, naïve, or unprepared.

That leads up to these key questions:

If you can't answer all those questions with confidence, the only advice I have is -- good luck! Without a talent management and succession plan to ensure a smooth transition, every company's productivity and competitiveness is vulnerable.