Tiny tracks found in Colorado are so small that they could belong to a kitten. But these footprints actually belong to baby stegosaurs — the only such tracks ever found.

Now, those tracks, along with some from adult stegosaurs, have new life as a 3D digital model that could help researchers identify other stegosaurus tracks and learn more about how these spine-backed beasts moved.

"We can accurately gauge the depth, the topography of the track and understand how similar and different tracks are to each other," said study researcher Matthew Mossbrucker, director of the Morrison Natural History Museum in Colorado. The model was made with a simple but relatively high-tech method called photogrammetry, in which computer software matches points on two-dimensional photos to build a three-dimensional model of the prints. [See Images of the Fossilized & 3D Baby Dinosaur Tracks]

Photogrammetry is not a new technique; it's been possible from the beginning of photography. But until very recently, the process was "extremely cumbersome," said Heinrich Mallison, another study researcher and a vertebrate paleontologist at the Museum für Naturkunde in Berlin. Turning 2D photographs into a 3D model required laboriously matching points by hand. 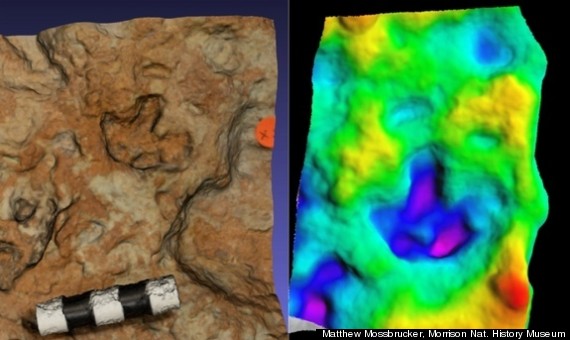 An original fossil baby stegosaurus track (left), and a digital 3D model of a baby stegosaurus footprint from Morrison, Colorado (right). Each section on the black-and-white scale bar represents 1 centimeter.


"In recent years, the programs and the computers have improved so much that now we can calculate 10 million individual points in the time it used to take to calculate one," Mallison told Live Science.

The technique is gaining popularity in paleontology, where it is used not only to make 3D recreations of tracks, but also of bones and dig sites.

"It's like a whole new vista is opening up, and we have the ability to do things with tracks that weren't really on most people's radars 10 or 20 years ago," said Mathew Wedel, a professor of anatomy and a sauropod dinosaur expert at the Western University of Health Sciences in California, who was not involved in the stegosaurus study.

Science in a snapshot

The latest software for photogrammetry is so simple that Mallison's initial model of the stegosaurus tracks took a mere 12 minutes to complete.

"I was stunned by how fast his software and techniques created a basic model from snapshots taken with my iPhone," Mossbrucker said. (The final model relies on a greater number of photographs.)

Mossbrucker found the tracks in 2006 and 2007 in boulders that had been lining a roadway in the town of Morrison, Colorado, just a few miles west of Denver. In the late 1800s, the first stegosaurus bones ever found were discovered in the bone bed where the boulders came from. These Jurassic dinosaurs lived about 150 million years ago.

The track way includes both adult tracks and ones made by infant stegosauruses. Those tiny prints are not much bigger than a quarter, and were probably made by baby dinosaurs not long out of the egg, Mossbrucker said.

Thus, the tracks are an important record of this iconic but still-mysterious dinosaur. But interpreting tracks is not as easy as measuring the outline and calling it a day.

"A track, really, is not just anatomy," Wedel said. "It's a combination of anatomy and behavior and the physical properties of whatever the animal stepped in." [Photos: Thousands of Dinosaur Tracks in the Yukon]

The advantage of a photogrammetric model is the ability to study tiny features of a track in three dimensions. Previously, researchers had to take multiple pictures with light sources positioned just so to throw shadows that highlighted miniscule ridges and grooves. On a model, the same effect occurs with the click of a mouse. Researchers can also map the depth and features of a print on a scale of less than a millimeter, enabling them to pick out fine details they might not have noticed with the naked eye.

The baby stegosaurus tracks are special and rare, Mallison said, which made them good candidates for adding to the digital record. Ultimately, though, paleontologists "should do it with every track," he said.

Among other dinosaur digitization work, Mallison and his colleagues, including Matteo Belvedere at the Museum für Naturkunde Berlin, are now creating and digitizing their own pseudo-dino tracks by having birds run across various types of dirt and mud and quantifying the tracks the animals leave behind. The goal, he said, is to have something to compare to the fossil tracks of animals long dead.

Photogrammetry could also help to solve the mystery of another set of baby tracks found in Morrison, Mossbrucker added. In 2010, he and his colleagues found the tracks of infant sauropods, a group of long-necked dinosaurs, in Morrison. One of these babies was running, and only its back-foot tracks are visible, raising the question of whether sauropod babies reared up on their hind legs when hauling tail. A study of the "subtle geometry" of the tracks could help answer this question, Mossbrucker said.

The researchers presented the stegosaurus track model in May at the Mid-Mesozoic meeting in Fruita, Colorado, and Green River, Utah.

Advertisement
Copyright 2014 LiveScience, a TechMediaNetwork company. All rights reserved. This material may not be published, broadcast, rewritten or redistributed.