Most young women dream of sugar plum fairies and knights in shining armor. Not Baby Doll (Lulu Brud) in Tennessee Williams' eponymous play, directed by Joel Daavid for the Elephant Theatre Company on the occasion of the playwright's 100th birthday.

Asleep in her crib -- yes, her crib: it's the only furniture she owns (a potent symbol, that), she dreams that furniture (another potent symbol) swirls off like farm animals in The Wizard of Oz while the cotton gin mill workers skulk about like a mute Green chorus.

Though the story's a little thin (it comes off more as an extended, intermission-less vignette), it offers a compelling story of expectations and obligations, of claiming one's due, as it thrashes about with unforgivable misogyny and racism, skeevy voyeurism, and the tit-for-tat one-upmanship of a hillbilly feud. The performances are solid and the direction nails the story's coiling foreplay (titillation, frustration, and impotence) and its rousing climax (honor and revenge).

Though its once-scandalous content nowadays can't compete with the pabulum of reality TV, the production, in the hands of Daavid and his talented cast, successfully examines a chain reaction that begins with five rooms of furniture being hauled away for non-payment. As per a marriage/chattel contract struck two years prior between her husband and her dying father, Baby Doll agrees to consummate her May-December marriage to Archie Lee (Tony Gatto) the day she turns 20, two days hence, provided the house is furnished. But when a rival cotton gin, run by Sicilian immigrant success story Silva Vacarro (Ronnie Marmo), legitimately takes away Archie Lee's business (no income, no furniture, no wedding night), he resorts to arson while Silva resorts to smoldering cuckoldry.

The performances were subtle though their effect was anything but. All at once, Brud's Baby Doll was immature and virginal, repressed, worldly, and cynical. Gatto's Archie Lee was loutish, coarse, violent, and, God bless him, unusually patient, which translated to almost unbearable bathos. And versatile Marmo's Silva was a milquetoast, a Machiavelli, and a Lothario. The results are electrifying, when Silva convinces Baby Doll to let him take a nap in her crib and when all comes to a climax (all's known, guns are drawn) in the kitchen.

Brud could have construed her Baby Doll as a hillbilly ingénue. Thankfully she didn't. She makes her a proud and defiant young woman who holds on valiantly to the only thing that truly belongs to her, her virtue. Initially, she plays Baby Doll like a Nabokov Lolita. Languorously pre-curtain asleep in bed, wearing the nightgown now known as a Baby Doll nightie, she's poised on the cusp of womanhood. Her face, body, and barefoot-ness express innocence but her justifiably wary voice and skittish movements confirm that she's not the malleable, available for the taking child-bride her husband thinks he's getting. With adorable orneriness she fights off his unctuous advances and stands up to his redneck violence. Brud's Baby Doll's got balls, something that can't be said of Gatto's Archie Lee, whose arrogant swagger and diminished sense of morality and exaggerated sense of me-me-me gets neutered by the honor, righteousness, and gentlemanly deviousness of Marmo's Silva. Think revenge, best served cold. 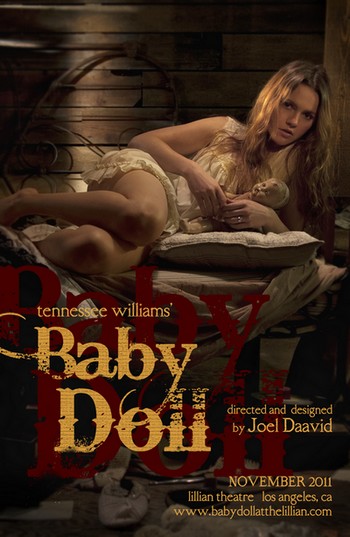