Thanks to a treasure hunter, his wife and the staff at the Blue Ridge Wildlife Center, a young fox is alive and well today, six months after the baby animal was found abandoned and injured in a field in West Virginia.

Beau Ouimette, a metal-detecting enthusiast, shared a video of himself and his wife, a veterinarian, stumbling across the female fox kit in April of this year:

Since both Ouimette and his wife had current rabies vaccinations, the two brought the injured fox pup back to their house and nursed her back to health for several days:

Ultimately, they deposited the adorable fox at the Blue Ridge Wildlife Center in Virginia, where the center's director, Dr. Belinda Burwell, tells The Huffington Post they cared for the kit with three other orphaned foxes from mid-April until late Summer, when they were released back into the wild.

"When they were 8 weeks old they were moved to an outside cage, where they had more room to play and less exposure to people," Burwell wrote in an email to HuffPost. "One of our goals is to be sure these foxes retain their natural fear of humans and do not become tame. At 5 months of age they were moved to a release site in a secluded area where we continued to offer them food while they learned to find food in their environment."

Burwell says the fox recovered completely from the wounds on her neck, and also required treatment for some intestinal parasites. Now more than half a year after her discovery, the center keeps tabs on the fox and her friends via a remote camera at the release site, where the entire group is doing well.

WATCH a video of the released foxes below, via the Blue Ridge Wildlife Center:

Orphaned Baby Fox Is Nursed Back To Health, Returns To The Wild
wild animals 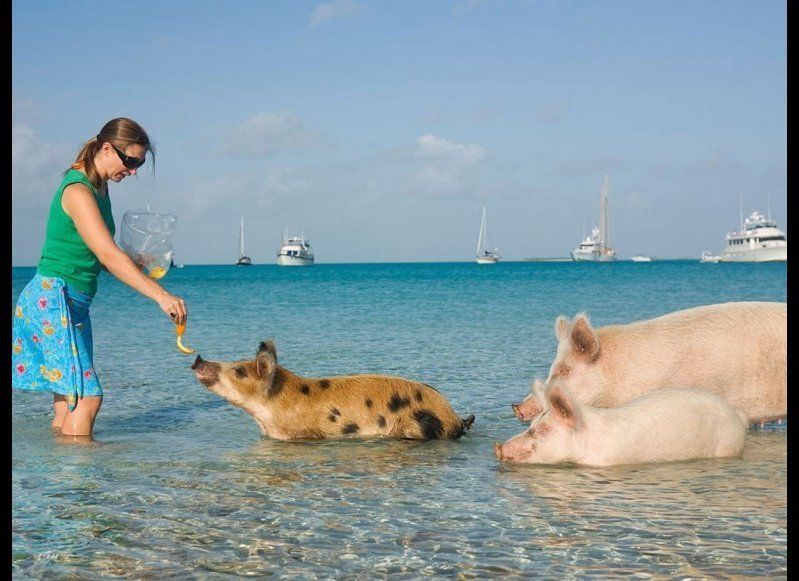 1 / 10
<strong>WADE WITH PIGS</strong> Pig Beach, Bahamas Pigs still can’t fly, but there is a group of swine that loves to swim in part of the uninhabited Big Major Cay, known as Pig Beach. How the pigs got there is quite the mystery. One local theory is that the animals found their way to the island after getting tossed overboard from a shipwrecked supply boat.