Alecia Phonesavanh still can’t bring herself to look at the deep wound in her son’s chest caused by a grenade hurled by a SWAT team. But watching donations and well wishes pour in from friends, family and complete strangers gives her hope.

The mother of four’s world was completely rocked last month when a SWAT team raided her sister-in-law’s Atlanta home -- in search of drugs they never found -- and detonated a flashbang grenade, WSBTV reported. The grenade hit the crib of Phonesavanh’s 19-month-old son, Bounkham, known as “Bou Bou.”

Bou Bou was placed in a medically induced coma, which he recently came out of, and suffered burns and a hole in his chest. Doctors still haven’t been able to assess the damage to his brain, Phonesavanh wrote in an essay for Salon.

Since that horrific night, the shaken mom has been working to raise awareness about the prevalence of police brutality and funds for her son’s recovery.

The family is originally from Wisconsin, but temporarily moved in with family in Atlanta after their house burned down. 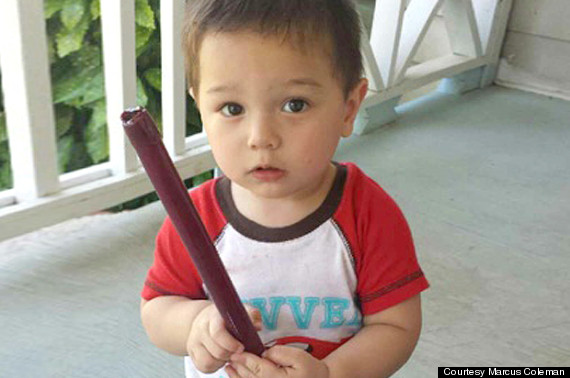 As of Friday, the family had collected over $33,000 and hopes to raise $100,000 – money they said will go toward paying mounting medical bills and any other expenses that come up as they remain influx in Atlanta.

Phonesavanh is particularly incensed because she feels the degree of violent action taken by the SWAT team was not at all warranted in this situation.

According to Phonesavanh, the SWAT team was looking for a “small amount of drugs” they thought her husband’s nephew had in his possession.

The nephew did not live at the home and was not on the property during the raid, according to Phonesavanh. There were also clear signs –- including a minivan parked in the driveway and toys strewn around the front yard –- to indicate that there were children in the house, she wrote in her Salon piece.

She hopes at the very least that her story will cause others to speak out against police brutality.

"This is happening every day to people [who are] being relentlessly and unnecessarily militarized by police,” Phonesavanh said in a recent HuffPost Live interview, “who think just because they're supposed to be upholding the law, they are above the law themselves.”

Learn more about the Phonesavanh family's advocacy efforts here and how you can get involved with helping baby Bou Bou recover here.