Christmas as a Microcosm of the Roots of Religion

Christmas and our popular obsessions with it have much to teach us about where religion really comes from. Even before Christianity transformed Yahweh into a three-headed deity, the God of Abraham had a split personality. The same God who lovingly nourishes the children of Israel with manna from heaven flies into a lethal rage when the foodies among them get bored with it and cry for meat (Numbers 11). Elsewhere Yahweh promises to love and nurture his Chosen People like a suckling child in a mother's arms (Isaiah 66:9-13), yet he also demands that any among them who pick up sticks on the Sabbath should be stoned to death (Numbers 15:32-36). These two divine personalities -- unconditionally loving versus fearsome, judgmental, and punishing -- reflect the two distinct selective pressures through which evolution has made us susceptible to religious emotions and beliefs.

One of these is the selective pressure for social cooperation, which transformed our primate ancestors from the moderate sociality of our chimp cousins into the builders of the most complex societies our planet has seen. Central to this is a mechanism that supports trust and cooperation on a grand scale, far too grand for anyone to keep track of how much each person has contributed to every group effort. Religion supports such large-scale cooperation, but only if it involves belief in a god who knows all and who rewards the righteous (cooperators) and punishes the wicked (cheaters) -- hence the emergence of belief in judgmental and punishing gods. And there's one more vital ingredient: the religion must also demand costly, hard-to-fake sacrifices as proof of fealty to the gods. Those who make the sacrifices prove their loyalty to the group; those who don't are shunned or ostracized. Of course it is not religion per se that is being selected here, but rather greater reproductive success through complex social behavior. From this social root of religion we get not only trust and cooperation within the group, but also fear and loathing of competing tribes. After all, they're worshiping the wrong gods. 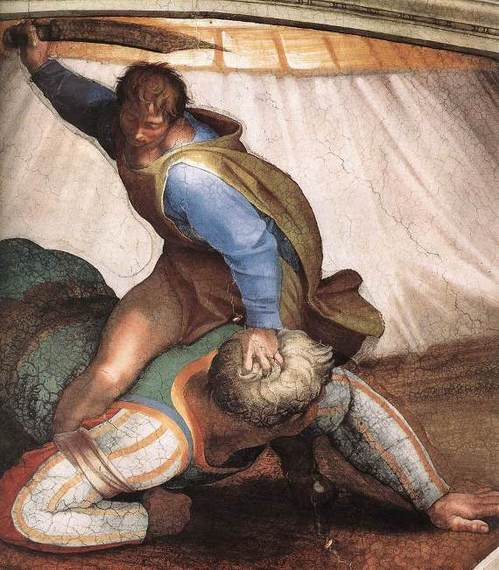 Michelangelo: David killing Goliath, a member of the out-group.

The other selective pressure behind religion has to do with our long period of helplessness as infants and dependent children. Like the infants of our primate cousins, human babies are born with an innate longing for their mothers. Despite their lack of coordination and incomplete neural development, human newborns prefer faces to other visual stimuli and quickly learn to recognize their mother's face as distinct from others. They also prefer her voice, especially when she speaks motherese -- the lilting and musical speech that babies effortlessly elicit from adults. This innate neural model of a loving and nurturing other, of a primordial savior, appears to be so deeply burned into the neonatal brain that it endures into adulthood. It imbues our perception of reality with the vague sense that the universe is somehow mindful and loving, and in times of desperate helplessness it can precipitate the compelling illusion of the presence of a loving mystical being. It is this neonatal root of religion that spawns belief in a god of unconditional love.

We see both of these dimensions of religiousness in nearly all religions, though the relative proportions vary, and that bring us back to Christmas. Christianity is dripping with infantile imagery, from the admonition that we must be born again (become infants again), to the parental labels used for God. In addition to our "Heavenly Father", Catholics venerate the Blessed Virgin as "Holy Mary Mother of God" -- only one tiny preposition away from "Mother God". The centrality of the mother-infant bond as the source of this infantile dimension of religion is most obvious in the Christmas story, where that bond is not merely likened to the relationship between God and humans, it is that relationship. But there is a slight problem here. If God is a nurturing parent to helpless and infantile humans, then why does God appear as the helpless infant in the Christmas story? Why is it so appealing to venerate God as a tiny baby? 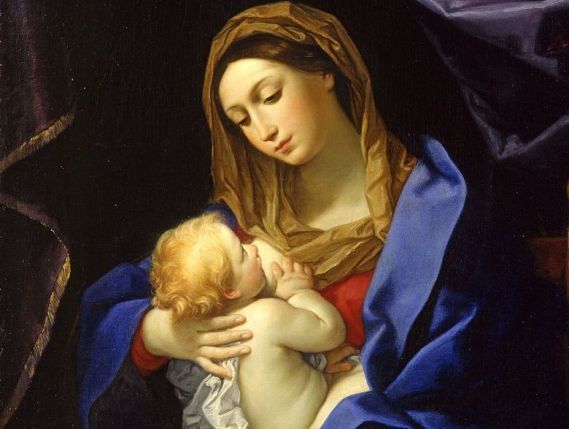 Madonna and Child by Guido Reni

I think there are several reasons for this, but the simplest has to do with that other biological source of religion, the social root that creates God in the image of a fearsome and cruel dispenser of punishment. Not all Christian sects celebrate Christmas. Some utterly reject it as a demon holiday. But those that emphasize God's compassion, forgiveness, and kindness in their theology tend to embrace Christmas in a big way. They defang the fearsome God of the social root by venerating him as a helpless infant. Hindus do the same, transforming their god Vishnu -- the destroyer of worlds whom Oppenheimer once likened to a nuclear explosion -- into his earthly incarnation as the cute little baby Krishna. Christmas cranks up the infantile and maternal love in Christianity, while turning down the fear, loathing, and tribalism. Except when it doesn't...

Why the War on Christmas?

Christian fundamentalists, whose theology emphasizes the judgmental god of the social root, sometimes reject Christmas altogether, but in recent years many have adopted a new strategy for putting their judgmental Christ back in Christmas. The phrase "Merry Christmas" has become the seasonal rallying cry for their tribe, and those who won't say those magic words -- like the department store executives who mandate "Happy Holidays" as the store greeting -- are hostile and dangerous enemies. More than that, they are waging a "war on Christmas", one that seeks to drown the fundamentalist's favorite childhood memories and adult religious identity under a flood of multiculturalism, moral relativism, and political correctness. Just as fundamentalists imagine that prayer is banned from public schools, they conjure a nonexistent war on Christmas because external threat -- like the real threat of a hostile tribe -- strengthens group cohesion and loyalty. Authors and politicians sense the anger and exploit it for personal gain. Atheists like me sense the silliness and retaliate in kind. 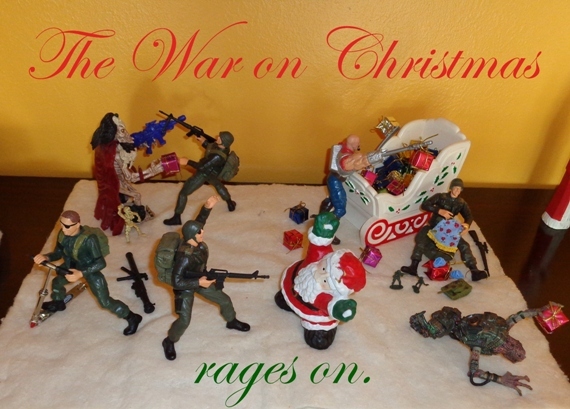 Merry Christmas to all! This essay is dedicated to the memory of my mother, who always loved Christmas.