The old saying, "one picture is worth a thousand words" couldn't be truer than when looking at a baby's photograph. Besides the overwhelming joy it brings, a baby's photo can give parents useful -- and potentially lifesaving -- information about their baby's health.

The next time you zoom through a new bunch of baby pictures, pause a minute and check for these important signs: 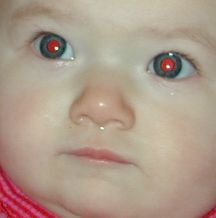 Parents who see red spots reflected their baby's eyes in their newly developed photos often see red! But they shouldn't be upset; those devilish-looking eyes are actually a healthy sign. This red reflex, as it's referred to, is usually seen in both eyes. The red spots are caused by the camera's flash lighting up the blood-rich retina at the back of the eyes; it's a good indication that the retina is probably unobstructed. 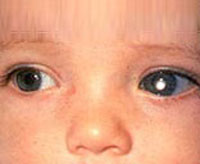 When a baby's eye looks white in a photo, it's an important warning sign that something may be blocking the retina. This white reflex or cat's eye reflex, as it's also known, is sometimes spotted in dim light, making a child's eye shine like a cat's eye at night. Medically known as leukocoria, which literally means white pupil, it's usually seen in only one eye and usually covers most - if not all - of the pupil. The white reflex should not be confused with the tiny white dots that often appear in both eyes in photographs, and are a normal photographic phenomenon.

Leukocoria is a red flag for several serious eye disorders including cataracts, retinal detachments, and infections inside the eye. It's also the most common warning sign of retinoblastoma, an extremely rare and very serious childhood cancer of the eye.

Most cases of retinoblastoma are recognized first by parents rather than doctors.

Unfortunately, even when parents do notice the telltale warning signs, they may not mention it to their baby's doctor. This can result in delayed diagnosis and treatment. Without prompt medical intervention -- which may involve chemotherapy, laser treatment, radiotherapy, or surgery -- retinoblastoma can be life threatening. The good news is that when caught early and treated promptly, it's totally curable in 95 percent of cases. 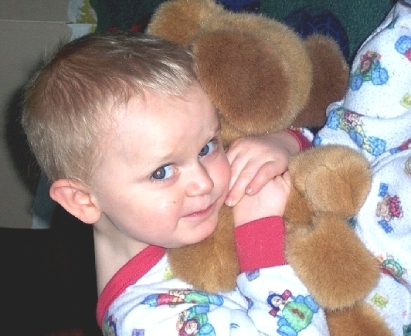 If a baby's eye looks yellow in a photo, it can be a telltale sign of Coats' disease, a very rare, serious genetic eye disorder. Coats' disease affects the retina and is often mistaken for retinoblastoma. But it's not a cancer; it's a progressive disease that can cause partial or even complete blindness. It occurs mostly in young boys under age 10, and usually affects only one eye.

If they're old enough to express themselves, children with Coats' disease may complain of vision problems. Treatments include cryotherapy (freezing), laser surgery, or in rare cases, more invasive surgery. Coats' sometimes stops progressing on its own, and cases of spontaneous cure have been documented as well.

Because the signs of retinoblastoma, Coats' disease, and other eye disorders are often first spotted in photos by parents, the next time you want to take your baby's picture, turn off your camera's red-eye reduction feature. And do this periodically throughout your child's early years. If you do notice a white or yellow reflex in photographs, be sure to bring the photos to your baby's pediatrician.

To learn about other important body signs in babies, check out our book, Baby Body Signs: The Head-to-Toe Guide to Your Child's Health, from Birth Through the Toddler Years or visit our web site: www.babybodysign.com

Authors of "Baby Body Signs" and "Body Signs: How to be Your Own Diagnostic Detective"