BANGKOK (AP) -- Authorities at Bangkok's international airport found a baby tiger cub that had been drugged and hidden among stuffed toy tigers in the suitcase of a woman flying from Thailand to Iran, an official and a wildlife protection group said Friday.

The woman, a Thai national, had checked in for her flight and her oversized bag was sent for an X-ray which showed what appeared to be a live animal inside, according to TRAFFIC, a wildlife trade monitoring group.

The woman was arrested at Suvarnabhumi Airport before boarding her Sunday flight. The cub, estimated to be about 3 months old, was sent to a wildlife conservation center in Bangkok.

"The cub arrived at our unit Monday," said Chaiyaporn Chareesaeng, head of the Wildlife Health Unit at the Department of National Parks' Wildlife and Plant Conservation Center, where the animal was put under close supervision.

"He appeared exhausted, dehydrated and couldn't walk, so we had to give him oxygen, water and lactation," said Chaiyaporn. "We have monitored him closely. As of today, he looks better and can walk a little now."

A DNA test was expected to provide details about its origin, said Chaiyaporn.

The woman, identified as Piyawan Palasarn, 31, faces up to four years in prison and a 40,000 baht ($1,300) fine for two wildlife smuggling-related charges, police said.

She denied the luggage with the cub belonged to her and said another passenger had asked her to carry it for them, said Adisorn Noochdumrong, head of an international wildlife division at the conservation center.

The cub could have fetched about 100,000 baht ($3,200) on the black market in Iran, where it is popular to have exotic pets, Adisorn said. He said he did not know what the woman allegedly intended to do with this particular cub.

Wildlife experts say the number of tigers in Asia have plummeted over the years due mainly to habitat loss and poachers who sell their skins and body parts to booming medicinal and souvenir markets, mostly in China.

Conservationists say the government needs to do more to eliminate trafficking networks that operate out of the country.

"We applaud all agencies that came together to uncover this brazen smuggling attempt," Chris R. Shepherd, TRAFFIC's deputy regional director for Southeast Asia, said in a statement. 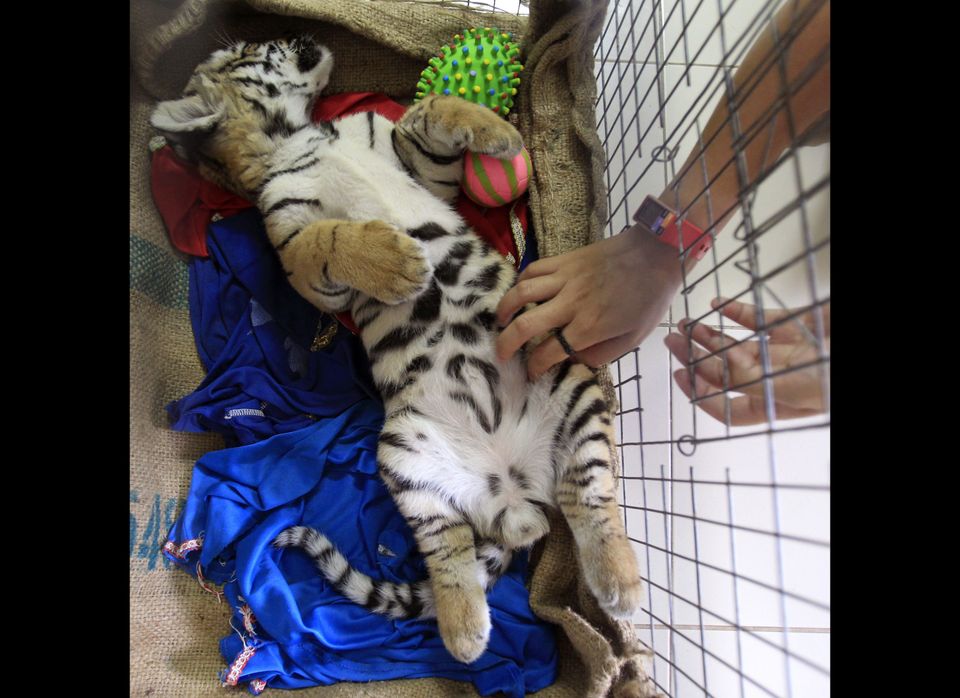 1 / 4
Thai veterinarian Phimchanok Srongmongkul plays with tiger cub at the Wildlife Health Unit at the Department of National Parks in Bangkok Thailand on Friday Aug. 27.2010. Thai authorities found the baby tiger cub that had been drugged and hidden among stuffed toy tigers in the suitcase of a woman flying from Bangkok to Iran, an official and a wildlife protection group said Friday. (AP Photo/Sakchai Lalit)
AP