I fell in love last week.

Two orphaned baby walruses, Mitik and Pakak, who were found in the waters off the coast of Alaska this summer, stole my heart. And in case you hadn't noticed they are taking over the Web. At birth, a baby walrus sports a set of whiskers that gives them a face perhaps only a mother could love, or at least, that is what you might think, unless you have been on YouTube recently. Cuddly, playful, and noisy, these little walrus babies have managed to capture hearts and minds around the world.

As adorable as they are, Mitik and Pakak are actually harbingers of the impacts of climate change -- messengers' reminding us that climate change threatens our health and well-being too. 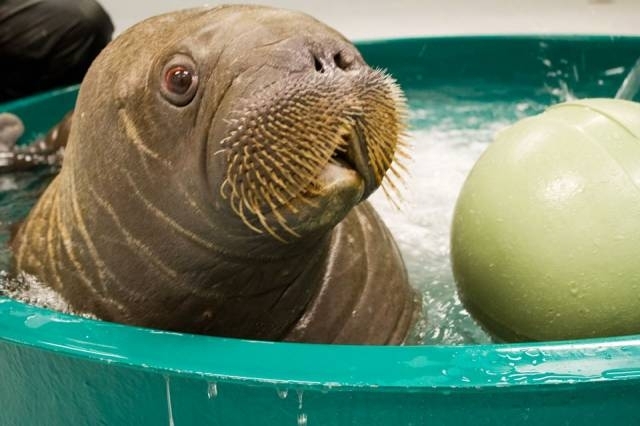 Mitik, who was especially small when found, now weighs 234 pounds and is settling into his new home at the New York Aquarium. Even at over 200 pounds Mitik is a miniaturized version of the just approximately 4,000 pound adult male that he will grow into, packing on a pound a day till he reaches his full weight. If he were in the wild, he would grow large tusks to accompany his incredible size like other Pacific walruses. He would use his tusks to "haul out" of the water and to excavate breathing holes in the ice. As a full grown male he would seem oddly proportioned, his huge canines weighing down his face, and on the beach he would appear comical, as he harrumphed his way through the crowd as if to say "get outta my way". In the open ocean he would use his flippers to propel him at great speeds, and to dive to the sea floor to forage for mollusks and other invertebrate treats using his sensitive whiskers or "vibrissae" as his guides. Just like all walruses, Mitik would go to sleep every night, bobbing up and down peacefully in the water thanks to the air sac in his body that allows him to float. 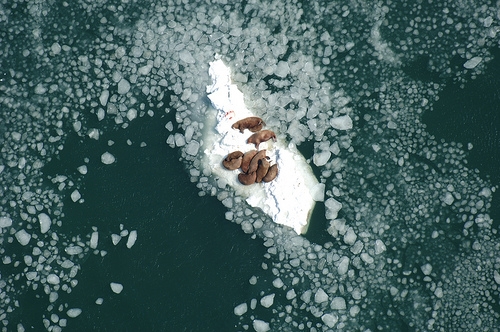 Pacific walruses live relatively long lives, spending their time in close-knit social groups, in the frigid waters of the Bering, Chukchi, and Laptev Seas. Like other keystone species in the region, walruses perform a crucial role in maintaining the health of the Arctic ecosystem.
Ice serves a critically important function in the life cycle of a walrus: ice floes provide a safe refuge for mothers to breed, give birth, and wean their young. These floating ice islands also double as resting platforms for feeding and migrating walrus families. Ice loss in recent years has been linked to record high temperatures caused by climate change - a huge threat to walrus populations. Thinner ice means fewer places to rest, and forces calves and their mothers to swim farther north to find suitable shores for haul outs. Traveling longer distances uses up precious time and energy all while putting calves at greater risk for predation, starvation, or separation from their mothers. 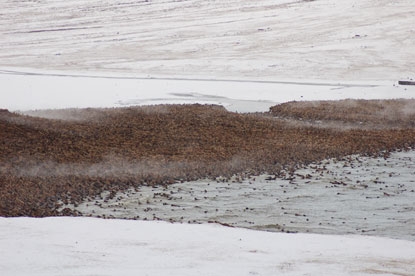 As ice floes become fewer and farther between walruses from the south push northward, causing overcrowding along beaches in the Chukchi Sea. The beaches are simply not able to handle the extra pressure, and as the larger adults struggle to find ground young calves, exhausted from their journeys, are crushed and killed. Mothers average only one birth every two years, so losses like this are devastating to their population. Climate change is the root cause of these stampeding deaths, which may have killed as many as 4,000 walruses in recent years, and sadly, unless something changes these numbers are going to keep going up as the density of the sea ice in the region decreases. These crowded beaches and orphaned walruses are signs that something is causing a horrible shift in the delicately balanced artic ecosystem. That something is climate change and unless we decide to make changes each year the ice will become thinner, and thinner, till it disappears completely, and along with it any hope for the walrus.

Mitik and Pakak are two very lucky walruses that found their way to new homes and into our imaginations in the process. It's my hope that their story will inspire each of us to do our part to protect Arctic habitat and perhaps to put a face on the fact that climate change is a very real problem, (albeit a cute whiskery one!) 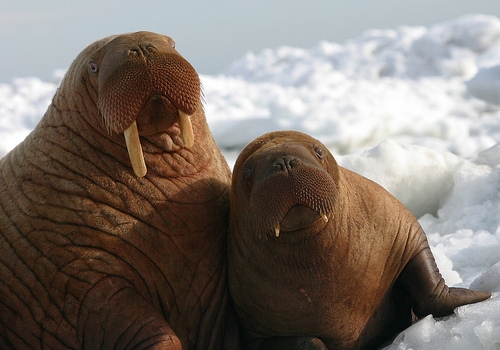 Walrus cow and calf at home on the ice (Photo: USFWS/Joel Garlich-Miller)