By Anthony Esposito SANTIAGO, Dec 16 (Reuters) - Center-leftist Michelle Bachelet promised major tax and education reforms to help ease Chile's social divisions after she swept back to power with a huge majority in presidential elections on Sunday. Bachelet won with about 62 percent support, the highest share of votes for any presidential candidate since the country returned to holding democratic elections in 1989. The landslide victory against Evelyn Matthei, the conservative candidate of the Alianza coalition, puts Bachelet back in the Moneda presidential palace after a four-year gap and gives her a mandate to push for an education overhaul and the fiscal reforms to help pay for it. "Chile has looked at itself, has looked at its path, its recent history, its wounds, its feats, its unfinished business, and this Chile has decided it is the time to start deep transformations," Bachelet told a jubilant crowd of supporters on Sunday night as confetti rained down. "There is no question about it: Profits can't be the motor behind education because education isn't merchandise and because dreams aren't a consumer good." In Chile, high-quality schooling is generally only available to those who can pay, and massive student protests - which sometimes turned violent - hurt the popularity of outgoing conservative president Sebastian Pinera. Bachelet ran on a platform of social policies to address a deep divide between rich and poor. Chile, the world's top copper-exporting nation, is ranked the most unequal country in the 34-member Organization for Economic Cooperation and Development. "She will govern a country with profound demands for change," Senator Ricardo Lagos Weber of Bachelet's New Majority coalition told Reuters. "The country isn't flat on its back, it is healthy, organized, growing economically, creating jobs and improving salaries. But it is also deeply unequal." HIGH EXPECTATIONS However, slower growth may make increased public spending tricky, while the opposition could block reforms in a divided Congress. And if Bachelet waters down her promises, she may face more protests. "Bachelet has promised a lot and expectations are high, while the (economic) situation isn't as favorable as it was in recent years," said Patricio Navia, a political scientist and professor at New York University. After expanding 5.6 percent last year, Chile's economy is seen ending 2013 with 4.2 percent growth and hitting between 3.75 percent and 4.75 percent next year. Shortly after Bachelet's victory on Sunday, hackers posted a message on the education ministry's website saying: "Mrs. President, we will take it upon ourselves to make things difficult for you. Next year will be a time of protests." Bachelet plans to reduce the effective fiscal deficit from roughly 1 percent of gross domestic product to zero by 2018. A slowdown may make that target tough to hit. Also, the U.S. Federal Reserve is expected to announce a pullback of its bond-buying program sometime soon, with some investors betting this could happen as early as this week. The program has supported riskier assets such as commodities and equities. A tapering of the rate of purchases may heighten global volatility and borrowing costs for Chile and other Latin American states. It would also hit the price of copper, Chile's key export. Prices of the metal have already slid about 10 percent this year but were up on Monday on hopes of a dovish stance from the Fed this week. The Chilean peso opened up slightly up on the dollar on Monday morning, although traders attributed that to wider bullish markets and the rising copper price. "The result of Sunday's elections has not had any effect as the markets had priced it in," a trader said. TAX REFORMS Supporters of Bachelet say her efforts to boost tax revenue may help finance public spending. Among other things, she is looking to raise corporate taxes to 25 percent from 20 percent, bringing the rate closer to that of developed nations. In congressional elections last month, Bachelet's bloc clinched the simple majority it needs to pass tax reforms. But divisions in Congress mean other reformist aspirations will be subject to political wrangling. For the four-sevenths majority required for education reform, for instance, Bachelet will need to cut deals with ndependents or opposition legislators. "Support from a few independent politicians in the Senate and the lower house seems achievable," said Goldman Sachs analyst Tiago Severo. "But the formation of a broader consensus will likely require the future president to compromise on some of the most controversial aspects of her agenda." 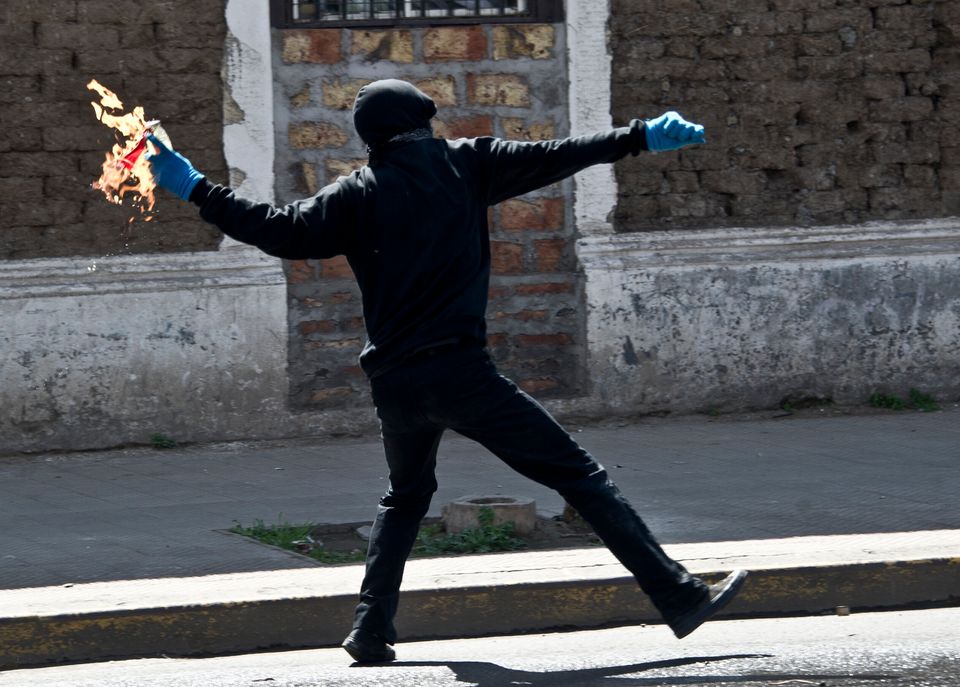 1 / 20
A man clashes with riot police as activists of the Chilean Human Rights organization 'Detained and Disappeared People' take part in a demonstration in Santiago on September 8, 2013, in remembrance of late President (1970-1973) Salvador Allende, who died on September 11, 1973 during the military coup d'etat led by general Augusto Pinochet. (MARTIN BERNETTI/AFP/Getty Images)
Getty Images