Monday night gave us episode 2 of Juan Pablo's bachelor reign and is it just me, or are things moving very fast this season, emotionally? In days of yore, it would be a few episodes before we'd see a drunken, weepy, topless coed losing her self-respect on national TV or we'd hear about dead parents/babies left at home, but last night we got all of that and more! So, so much more.

Claire (fake baby bump) scored the coveted, first 1:1 date, a meaningful sign that usually bodes well for the lucky recipient. Johnny Pabs pulled up to the Bach manse, blindfolded Claire, shoved her in his sports car, then peeled out, much like a white collar kidnapping! JP drove them to a winter wonderland in Los Angeles, replete with Christmas trees, snow, and sledding. Claire was still in a blindfold when JP dropped her in the white stuff, just like in "The Town" when the bank manager gets blindfolded, then dumped on the edge of the Boston Harbor (yes, dear reader, everything ties back to Boston or Boston movies). The pair went sledding (did it remind anyone else of Clark Griswold's bullet-like sled ride?), ice skating (WOW Claire cannot skate), and then hot tubbing (OF COURSE). Claire was having a blast, reciting things in list format, "Great date? Check! Hilarious? Check!" Super lame way of showing happiness? CHECK! She gave Johnny Pabs a massage in the jacuzzi while talking about her father's influence on her and his death, then they hopped out and slow danced to live music from Josh Krajcik (good singer, but like, WHO?). Claire said that this is what her father would want her to be doing. Slow dancing in a sopping wet bikini and jacket while fake snow falls on you? Wow -- my dad always pushed for a college education, but every family is different, I guess! Claire scores a rose.

Kat (blonde, Salsa danced with JP when she met him) is on deck for the next 1:1 and she is elated, saying, "I can't believe this is real life! I am going on a 1:1 date with Juan Pablo!" Umm Kat, in real life, we don't need to call it a "1:1 date" -- we just call that a "date." Johnny Pabs and Kat hop on a private jet and yet again, The Bachelor is dancing on the edge of being a reality TV show about kidnappings. JP says that he has a surprise for Kat and disappears, then reappears in a TRACKSUIT! Wow, this episode really IS just like "The Town" and I love it! Is this private jet bound for a tattoo parlor in New Hampshire (might I recommend "Tattoos By Benny") where they are going to get little fighting Irish tats like Jeremy Renner had in the aforementioned cinematic masterpiece? Sadly, no -- they are going to an Electric Run in Salt Lake City, Utah (yeah, huh?) where they are going to join thousands of people and run a 5K while wearing day glow, light up clothing. They dance around, wave light sticks, Johnny Pabs hugs Kat from behind a whole lot, and yet somehow we are supposed to believe that they aren't rolling on Ecstasy. I don't even know anymore. Kat scores a rose.

The group date is a photo shoot with dogs (Models & Mutts) during which each woman will be given a costume and a dog and posing for photos. The costumes run the gamut: a huge afro (Chelsie), bikinis (Chantel, Victoria), dresses (Renee, Cassandra), a fire hydrant suit (was for Lucy, but Elise traded her), and tiny signs/nudity (Andi, Lucy of course). But the best costume (worst costume) had to be given to professional dog lover Kelly, and words can't do it justice: 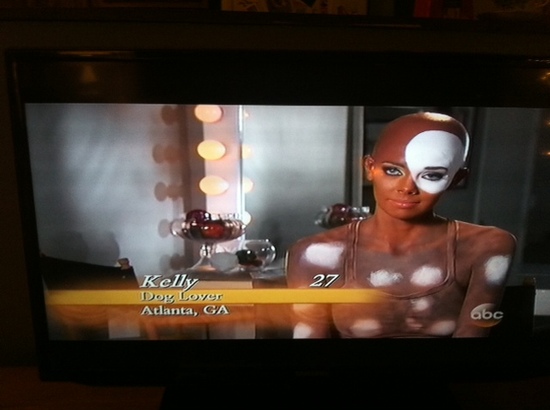 The after party is at a rooftop lounge with a hot tub, where the ladies have some drinks and get face time with Johnny Pabs. Cassandra tells JP about her son, Renee has a quiet moment with him but no kiss (they are heading for the platonic planet, not the bone zone, I fear), and Nikki gets some QT. Victoria has a few too many drinks and ends up dancing alone in the Jacuzzi, calling the Heimlich maneuver the "Hymen maneuver," hunting down Johnny Pabs, then locking herself in a bathroom and bawling her eyes out. Sweet pledge mom Renee comforts her, but Victoria is inconsolable (about what, we don't really know) and she wants to go home. Juan Pablo goes to her and attempts to speak with her, but Victoria isn't having it. The producers put her up in a hotel for the night and she calms down.

The after party wraps up and JP gives Kelly a rose, probably as a thank you for her good attitude at the photo shot. Kelly calls Victoria desperate, which is rich coming from a girl who dressed up as a dog -- or was it an alien? -- in the last challenge. You may have won this challenge, Kelly, but you have lost he war/guy, I guarantee.

The next day, Johnny Pabs visits a sober and contrite Victoria who admits that she "set off the crazy train" and says that she feels things very intensely. Yeah, you feel BOOZE very intensely, girl. JP has no time for such immature behavior and sends her home. He only has time for one child in his life and it's his DAUGHTER! Buuuuurn!

Then it's cocktail party time and the three dateless ladies get first dibs at 1:1 time with Johnny Pabs. Sharleen apologizes for her odd response to JP's first impression rose last week (good call), while Amy L. puts her newscaster skills to use, doing a fake news segment with JP that was cringe worthy and gave me dumb chills. After that display, Amy L. says, "I feel very confident" and I shouted at my TV, "ya shouldn't!" Cassandra cries about missing her son to Renee and JP interrupts to console her and give her a fist pump (with explosion).

Finally, it's rose ceremony time. Kat, Kelly, and Claire already have roses, but who else scores 'em?
-Cassandra (playing the mom card is working for her... for now)
-Nikki (sweet nurse is a strong contender)
-Andi (I shall henceforth call her ombre DA because her hair rules, as do rhymes)
-Elise (that blonde has a never ending supply of sexpot dresses)
-Sharleen (Old Soul LOVES tan, drapey dresses almost as much as Dorothy from Golden Girls did)
-Renee (pledge mom)
-Danielle (stepped up her dress game this episode!)
-Lucy (did I mention she hangs out at the house pool topless? Guys, she's just so FREE, she can't be contained by silly things like bikini tops!)
-Alison (aka Alli, who I sometimes mistake for Andi. Not to be racist, but sometimes all brunettes look alike!)
-Chelsie (cute blonde)
-Lauren (pianist is a slow burn, it seems)
-Christie (is a master of disguise--last week she looked like white trash in a white dress, this week she looks fierce in a leather dress)

So who is hopping on the 'ole SS Eat Shit for a boat ride back to civilian life?
-Amy L. (hard to believe, but most dudes don't fired up to be fake interviewed by a newscaster who speaks in 3rd person about herself)
-Chantel (a shame because she's a knockout and her sophisticated cocktail party look was gorgeous)

Next week we have an appearance by a country band (hell yeah) and I'm hoping we have more allusions to "The Town."

What were your favorite parts? Did you cringe with Amy L. did that fake interview bit, too? Share your thoughts in the comments!