When the well-reviewed HBO series "Girls" was suffering post-premiere backlash, one of the main complaints that critics lobbed at the show -- besides ZOMG Lena Dunham has kind of famous parents! -- was that the characters were unlikeable. As if having an anti-hero like Hannah as the protagonist, was so avant-garde in an era of Don Draper, Walter White, Tony Soprano and Nucky Thompson. (Never mind that Hannah, as played by Dunham, isn't even unlikeable, but whatever.)

That same critique is being used to dismiss "Bachelorette," the caustic, new, one-crazy-night comedy from playwright turned writer/director Leslye Headland. The film stars Kirsten Dunst, Lizzy Caplan and Isla Fisher as three aging mean girls who attend the wedding of a high school friend they used to call "Pig Face." (Rebel Wilson plays that role, creating a character who is both brave and pathetic almost simultaneously.) During the bachelorette party, the trio inhale loads of cocaine and subsequently tear the bride's wedding dress, setting the film's simple plot into motion. If you saw and loved "The Hangover," the pace of "Bachelorette" is familiar: It's fast, loose, and razor-sharp. Think "After Hours," Martin Scorsese's addled dark comedy classic, but with bulimia jokes.

Like "Girls," the leads here are ostensibly unlikeable and selfish: Dunst's Regan is a classic control freak, Caplan's Gena is the foul-mouthed brunette who makes fun of people at parties (basically her "Mean Girls" character all grown up), and Fisher's Katie is, as the actress herself admitted in an interview with HuffPost, "stupid." However, what connects them to reality is that -- deep down -- they're just like you and me: selfish and flawed.

Here's the sneaky thing about life: Even people who claim they aren't selfish are actually selfish to some extent. It's basically human nature: We all think we're right. (Bill Clinton said this slightly more eloquently during the Democratic National Convention.) The critiques of "Bachelorette" -- those ragging on the characters for being selfish bad girls -- have an almost puritanical vibe to them. No one told the guys in "The Hangover" to get themselves together, so why should the ladies in "Bachelorette" be chided for the same behavior?

Well, perhaps because they're women and women shouldn't behave like that? That's at least one possible (and ugly) reason for the decorum police coming out against "Bachelorette." Allowing for benefit of the doubt, the other answer is more simple: People hate it when characters cut too close to the bone. No one wants to watch their greatest insecurities play out onscreen; they go to movies to get away from those insecurities. With "Bachelorette," Headland puts human deficiencies front and center, almost daring the audience to realize they aren't that far removed from ripping their friend's wedding dress in a fit of mockery. Making the audience feel uncomfortable with themselves is something Dunham accomplished on her series as well. The loudest dismissals of "Girls" seemed to come from a place beyond merely disliking the show; some reacted like Dunham personally injured a member of their family (or maybe their personal psyche).

(Of course, there are many legitimate reasons to dislike both "Bachelorette" and "Girls," but some of the more vitriolic reviews of each seemed to degenerate into "I don't like these people, so this is bad!")

"I just for some reason have empathy for people that are sort of villainized for their weakness or their behavior," Headland told THR. "I just felt it was important that they weren't completely awful, but there was just enough empathy with them that you could follow the movie, that you could feel comfortable going the length of the movie behind it."

Or, perhaps for some, too much empathy and not enough self-awareness. After all, who wants to look in the mirror and see a mean-spirited, selfish, flawed, human being staring back?

Why Leslye Headland's 'Bachelorette' Is Too Uncomfortable For Some
Scenes From &#039;Bachelorette&#039; 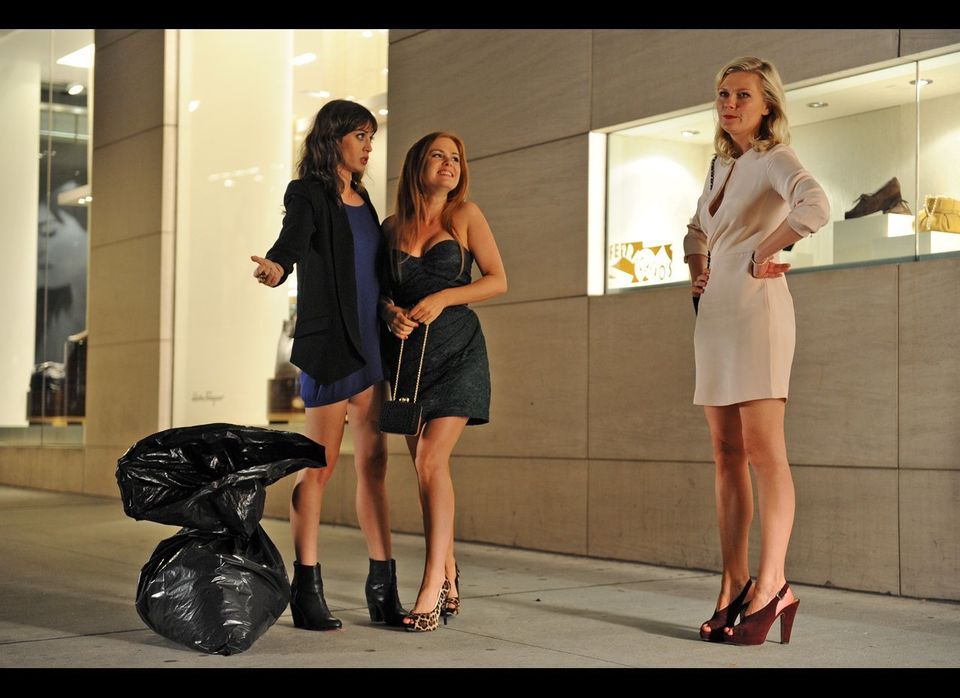