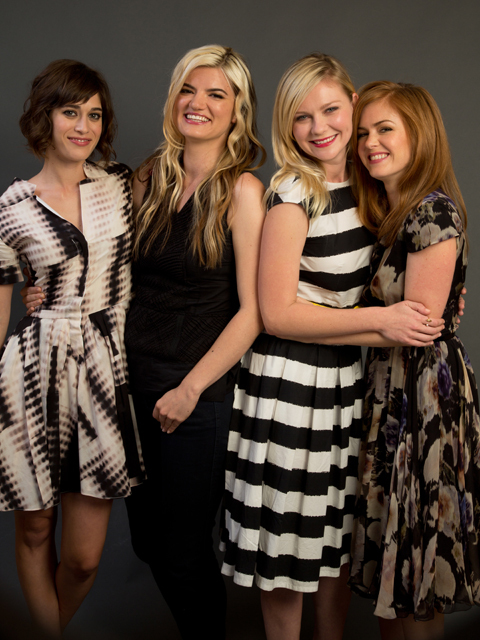 Bachelorette doesn't wait to announce to the audience that it had better buckle up. In an opening scene, about-to-be bridesmaid Gena is on a plane, seated next to a man whose name in the credits is listed as "Barely Attractive Guy." What Gena delivers next is a philosophical and extremely graphic dissertation on blow jobs, using a blow-job-o-meter of 1-10, and lists her reasons for never exerting more effort than a 6 with the intensity of a woman arguing for the development of a democratic governmental state. And as one watches, wide-eyed, giggling nervously with shock and awe, one can't help but wonder, "Who wrote this?"

In life, writer-director Leslye Headland is extraordinarily spontaneous, creating many delicious and nail-biting moments for her PR team. She is extremely verbal, very funny, and her speech is woven around her deep and unrestrained laugh. She curses abundantly and with an almost musical enthusiasm. Some interview subjects are so guarded that they don't want to tell you anything at all, not even the time. But, refreshingly, Headland is the opposite. There's nothing she won't talk about, and it's hard not to feel a kinship with someone who eats dark chocolate with relish during their interview. She's not afraid of the rages the film is receiving as well as the raves, because she considers criticism "a very important part of film." When asked what inspired the sex-oration-at-20,000-feet scene above, her response is characteristically unforgettable and provocative:
"Because I only give 10s."

In part because of its incendiary material, Bachelorette is a landmark moment for film. Before its official opening on September 7, it was released on August 10th on iTunes and VOD, grossed $500,000 in its first three days and quickly became the No. 1 iTunes rental. In an industry where opening weekends are live or die, the early release method is a way of getting the movie to its appropriate audience. Many indies have taken years to get their due. Headland says, "Why wait 10 years to be Heathers if you can be Heathers now?" The pre-opening success of Bachelorette may well change how certain films are released going forward.

Bachelorette has countless iTunes reviews, the majority of which are glowing. But there are warring factions; the material in this movie has made a lot of people very very angry. Which in part could be because of the expectations that came with it. With a title like Bachelorette, people are expecting a Bridesmaids type of film. Many are calling Bachelorette "Bridesmaids meets The Hangover." Although Headland wrote the off-broadway hit, Bachelorette in 2007, four years before Bridesmaids ever graced our screens. Adam McKay and Will Ferrell saw the play, decided that it should be a movie, and now they are working with Headland on other ideas for film and television. 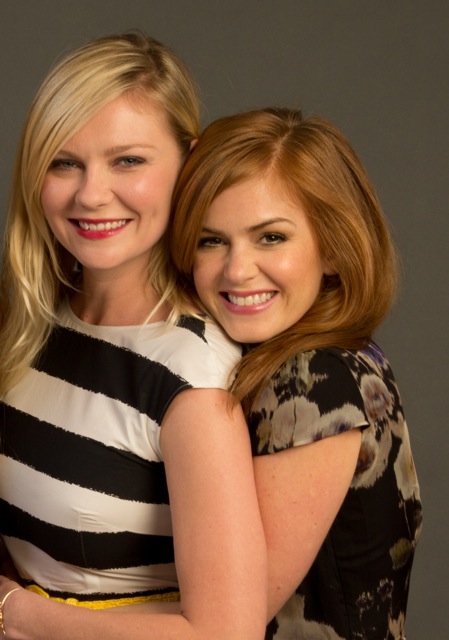 But it's easy to see why viewers might initially make the Bridesmaids comparison. We have Regan (Kirsten Dunst), Katie (Isla Fisher) and Gena (Lizzy Caplan) a maid of honor and two bridesmaids who engage in outrageously vicious behavior the night before the wedding of their friend Becky (Rebel Wilson), a girl they cruelly nicknamed 'Pig-face' in high-school. But really, it's more a Blue Velvet for women's friendships meets The Hangover.

Like Blue Velvet, on the outside we have the machinations of a polite society: a wedding, beautiful dress, bridesmaids, a glamorous hotel. But when the first tier of the wedding cake is lifted, we see all of the ugly, petty, narcissistic jealousies that lie in darkness underneath. The beautiful bridesmaids wonder: How has the fat girl found true love first? Why are they so alone, when they have done everything society has told them to, including, stay thin? And as they rampage, we as the audience are spared nothing. The characters have no filter, no skin, and leave no scathing thought unsaid. It's almost like shining a light on a swarm of insects, but instead of scurrying away, they come up even closer and dance for the camera.

What I wanted to do was I wanted to take a character like Becky (the bride) who I saw as really beautiful, not just outside but also inside, and I wanted to surround her with three glamorous women who are saying to her what society is saying about her. I felt that this was a way to confront body image and the pressure that people put themselves under from different sources; whether from the magazines, films, or the porn industry. Not to begin pointing fingers, but just the idea: What if three really hot, really smart, funny chicks did this? Would you realize how truly shitty it is, and would you notice it in real life the next time someone was doing it?

But what is it about Bachelorette that is making people either ecstatic with their ability to relate or so very alienated and angry? We have three beautiful women engaging in promiscuity, excessive drinking, and snorting coke. Is it that we're not used to seeing women in films portrayed in this light? Or is it not about their excesses at all? Is it that Headland has stumbled upon a truth about how women are really capable of treating each other?

But also the question of likability has arisen. When McKay first approached Headland with the idea of Bachelorette as a movie, she said "I've written one, only no one will make it." The studios felt that the characters weren't "likable enough." One of the film's chief criticisms is that all of the characters are shallow, narcissistic, cruel, and that their behavior to themselves and each other is completely despicable. Headland's feeling is, "Who's talking about likable? I just found these characters absolutely fascinating."

Did Headland know when she wrote it that the reactions would run so hot? "No, not at all. I was coming from a very personal place, a painful place; it was just an effort to speak the truth about a particular theme, and things that had happened to me. I was shocked when we did the Q&A after the Second Stage premiere and people were just so angry about it. I just didn't realize it was such a hot topic."

Where did the idea from the film come from? "I think it was that I was 27 years-old, I had just quit my job as an assistant (to Harvey Weinstein, often referred to in Hollywood as "God".) I was pursuing writing full-time for the first time in my life. I'd felt like my fear was the most interesting thing to write about; I was so scared that I'd make the wrong choice, I didn't understand why I worked so long as an assistant but then hadn't gotten promoted when other people had, I didn't understand why my younger sisters were getting married before me. It's not that those things weren't important to me, I just didn't understand why they were important to me. Am I feeling bad because it's actually what I want, or is it because somebody told me it was what I was supposed to do and I haven't done it?"

Does she think that audience members are so angry because these are women instead of men? "Women are much more under the microscope about moral behavior versus material success. Men can be assholes. We love Don Draper. We love the fact that he's good at his job and he makes lots of money and he fucks women who aren't his wife, and he gets drunk every day. We are so happy for him! He is living the American dream, as far as we're concerned. And it's not that I'm really complaining about that, it's just that I want to know why this is the case. And I don't think I really answered it with my film. I think I just may have started the beginning of a really long conversation."

There are many moments in this film that are going to be shocking for viewers. But what was the most shocking for Headland personally? (big laughter) "It's when June (a stripper fresh from some VIP room action) wipes the (bride's stolen) dress on her vagina. I did not direct that! June just did it. She said, "I really think I need to wipe the dress on my vagina, Leslye." And I said, 'That's disgusting.' But I'm so glad that she did, because it's gold. You hear it in the theater, people are freaking out, they are just losing their minds! But I personally was grossed out by it."

Does Headland hope that the stir Bachelorette is making paves a way for women in comedy and film? "I hope so. I'm standing on the shoulders of giants. I would love a 14-year-old chick to see this movie and say "One day, I'm gonna make one."