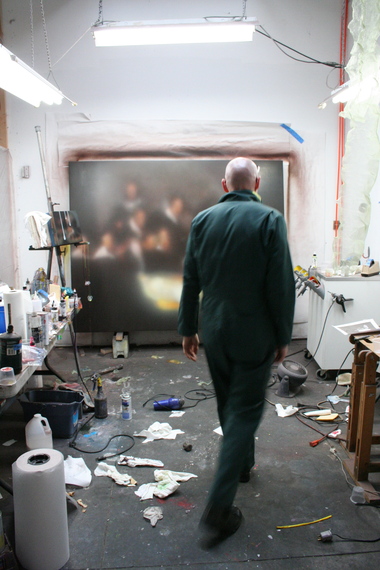 In some ways, a Tom LaDuke painting can seem like a tease. Images that are painstakingly rendered to perfection are blocked by smeared daubs of paint or confounding painted reflections, which leads me to feel both an anxiety and a thrill while looking at his work -- like a maddening itch that I am just about to relieve with a scratch. I immediately want to "get" his work -- to be able to figure out all the references and pick apart the layers which seem so clear, but he blocks you by obscuring the obvious. This effectively makes his work all the more exciting to look at as the bits of information disentangle and augment each other in unexpected ways.

Technically, his work is incredibly precise and speaking with LaDuke shows the precision of his mental acrobatics as well. Both healthy skepticism and complete enthusiasm seem to tie him to his practice. His brain is going a million miles a minute, mulling over the logical and philosophical possibilities of his work and I recently had the pleasure of going along for the ride.

Tom LaDuke: I'm working on a show opening on May 1st at CRG Gallery in New York. I'm making nine paintings and four sculptures -- maybe five sculptures. It's all new work, so I'm terrified as usual, (laughs) because who knows if they're good or not?

How do these new pieces and your previous work relate or differ?

Physically they have a link because there're layers of information that coalesce on the surface. It's funny: I'm always trying to understand the puzzle of reality. I use bits of reality, known things, or conventions of painting or sculpture to give me a doorway to stand in and a direction to look.

I can't remember who said this, but knowledge never created anything, and I think that's right on. It gives you a framework, but "creativity" lies beyond it. They say that the origin of creativity terrifies us because it is unclear to us. All this is exciting to me. My shrink calls me a "Fire Toucher..." 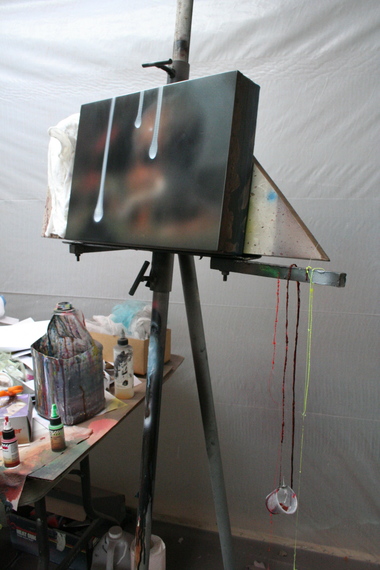 What do they mean by that?

Like you know you shouldn't so you just have to. That's kind of a good description of my process too. I like to build something up, like the surface of the painting I'm working on. It has to be perfect (or as close to perfect as I can get) without compromise, and this makes it worthy of being destroyed by the next layer.

With that in mind, how much of your process allows for spontaneity and improvisation? From layer to layer, is there room for that?

That's a really great question because there's a combination of spontaneity and improvisation throughout the work. I think it's a cop out to say I'm using my intuition, or to make a purely abstract painting, because I don't think either really exists. Anything you do, including the reason you're doing it, is connected to all this other stuff that's going on. Inside that framework of my paintings and sculptures there are a lot of moves going on and I don't know where they're coming from. They seem to be guided by something else, but I do not think they are arbitrary either.

You have to really get in there and push it over the edge. There's a lot of control in my work; that's how I enter making things. But the control is never the interesting part. The interesting part is when you push your control beyond your capacity to allow for spontaneity and improvisation... 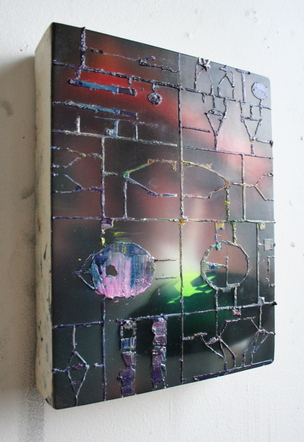 This also goes back to the Fire Toucher thing: if it registers as impossible, I'm MOST interested in it.

That relates to one of the questions that I always ask the artists I interview: what is the most enjoyable or most satisfying part of the process for you?

I'm so lucky -- it's all good. It's all fun. But I guess the best moment is when I get a glimpse of my location. And I don't mean geographically, I mean where it all seemingly seamlessly connects.

So, when something switches over from the unconscious to conscious, or from the unknown to the known, an invisible gap is crossed that can be felt in which you know you've just learned something. The feeling is satisfaction from having recognized and remembered what was learned, like you've always known it somehow.

The switch over between running on automatic pilot (within the ideology of it all) and suddenly seeing an image of yourself in a moment of clarity -- that's a good moment.

You can't falsely generate it; it just happens.

What's the most challenging part of the process? Or unlikable, since sometimes challenging can be likable... but where is the struggle? 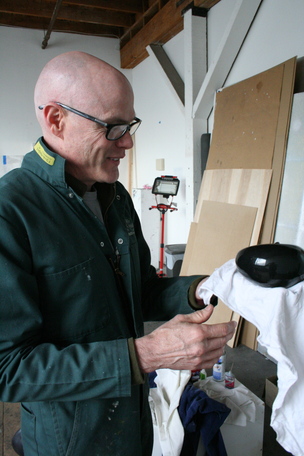 I guess that would be deadlines. There are always deadlines, but also I'm really thankful for deadlines, because if I didn't have any, I'd be pretty bored or broke. So they're good to have, but they freak me out, because there's never enough time. That's been a big thing in my life that I've had to work out. I think that's the worst part.

How do you see your sculptures and paintings relating to each other? Do they satisfy different impulses for you or are they different means to the same end?

Different means to the same end. I think it's all the same, basically. Everyone has been trying to fight the static nature of painting and sculpture for quite a long time now. Whether painting and sculpture are seen in a white cube or someplace else -- the viewer still has to be "in the know" to see what it is that they're seeing so it kills them. We're all working on corpses and trying to breathe some sort of life into them in our own way.

What do you mean it kills them?

Oh -- they use this example in a lot of, what is it -- Laconian theory -- every word is a tombstone replacement of what it's referring to. As soon as you notice something, it becomes a still life. The Dutch masters attempted to capture their reality on canvas but the closer they get to it, the deader it became because everything alive is in motion. As soon as you stop it, it kills it. 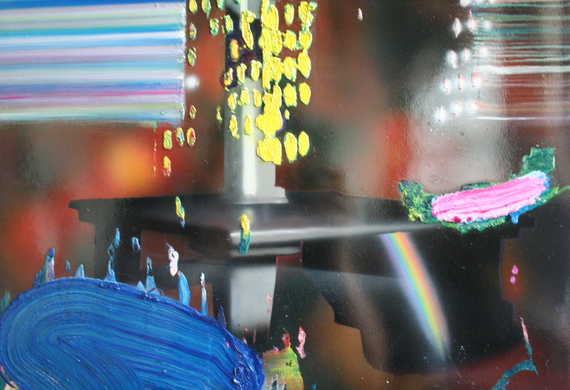