When you think of bringing endangered species back from the brink of extinction, you might picture the California condor or the bald eagle. You probably don't think of the Jamaican iguana (Cyclura collei) -- after all, last year it received the dubious distinction of being highlighted in a book titled Priceless or Worthless? The world's most threatened species. In reality, this native island species is one of the world's greatest conservation success stories. 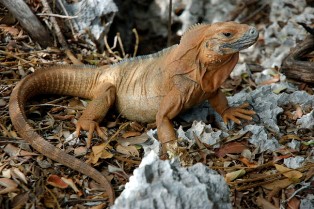 The Jamaican iguana (Cyclura collei) is one of the world's greatest conservation success stories, but recent developments in Jamaica may rock the iguana back toward a path to extinction. (Image credit: Rick Van Veen)

In the 19th and 20th centuries the Jamaican iguana began vanishing from its island home as habitat loss, hunting, and introduced dogs, cats, and mongooses (to control Jamaica's rat population in cane fields) took their toll. By the late 1940s, the iguana was believed to be extinct.

Hope ignited in 1990 when a live iguana was brought to the Hope Zoo in Kingston, Jamaica. Today, with the dedication of local conservationists and international partners, a reintroduction and research program is helping prevent the iguana's extinction. Hatchlings are collected from the wild and raised at Hope Zoo to a size that makes them less vulnerable to predation by mongooses, and then released back into their native range, Jamaica's Hellshire Hills. The University of the West Indies also runs an extensive research, monitoring, and non-native predator control program to help released iguanas thrive. Without these dedicated interventions, the species would most likely be gone forever. Instead, the Jamaican iguana recovery effort is among the most successful conservation stories in the world. Females returning to the few isolated nesting areas have increased six fold since recovery efforts began in 1990. These actions have provided hope and inspiration that a species once considered extinct can not only be saved but put on the road to recovery.

Recent developments in Jamaica, however, may rock the iguana back toward a path to extinction. The Government of Jamaica is considering locating a trans-shipment port on the Goat Islands in the Portland Bight Protected Area (PBPA). The PBPA is considered globally important because of the unique habitats and species that are represented within its boundaries, including the Hellshire Hills, which is not only the Jamaican iguana's sole range but also the most well-preserved forest of its kind in the Caribbean. Picture one of the huge container shipyards at U.S. coastal cities, and you have an idea of what might be coming to the area.

The Jamaican iguana is barely holding its own in the Hellshire Hills, but the long-term strategy has always been to reintroduce iguanas to the Goat Islands once non-native animals have been removed. This is the final, critical piece to ensuring the long-term survival of the species. If the port project is approved, it will undo decades of work and derail true species recovery. Aside from missing a fabulous opportunity to save several of Jamaica's iconic species, and capitalize on a potentially lucrative and sustainable eco-tourism venture, the port development would also destroy the surrounding marine environment, including recently declared fish sanctuaries.

Port development on Goat Islands will send a clear but unfortunate message to people around the world who care about and donate to tropical conservation: That an investment in Jamaica is unwise, that protected area designations do not matter, and that commercial interests supersede national heritage. Those opposed to the port are not trying to keep Jamaica from developing or creating jobs and economic opportunities for residents. Instead, we are asking the government to choose one of the other, more suitable port sites that have already been identified. 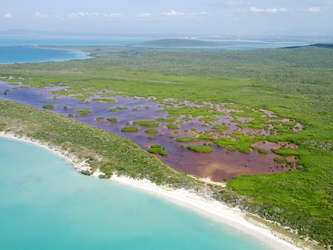 Hellshire Hills is the most well-preserved forest of its kind in the Caribbean. (Image credit: Jeremy Francis)

Unfortunately, this scenario is playing out throughout the developing tropics and is a difficult topic to address because those involved often depict it as a case of "jobs versus environment." In reality, Jamaica's conservation partners are sensitive and appreciate the need for diverse economic drivers in the country. At the same time, for any given development project, government leaders should also consider beneficial services that healthy ecosystems provide, such as storm protection, erosion control, and food security. Serious dialogue between government and conservation professionals can help us create alternative models for sustainable development in the PBPA that can be applied to similar development issues beyond Jamaica. Let's not forsake our future for short-term gains.