The Manhattan Film Festival is a small festival in a large city, New York City. It's a modest event with some ambitious films. Without corporate sponsors, it screens low-budget films, yet low-budget films that can rock your socks! Such as Apostles of Park Slope.

The film's narrative is straightforward. A man that is too young loses his not-that-old mother. The neighborhood gang of guys rallies around their distraught buddy. He's taking it real hard. They organize a get-together at a local Italian restaurant for food but mostly drink. The local priest shows up, but he's in his own holy world. Slowly, as the night progresses, the mourner begins to come around.

The message of Apostles of Park Slope is simple: religion is not the key to making it through the hard times of life, although it might not hurt, in fact it might help, yet the real life savers are your friends. Yes, even if those friends are 12 foul-mouthed Brooklyn destroyers-of-the-English-language knuckle-headed Micks, Wops, and Polacks.

"During the film I want the audience to feel they are right there and a part of the dinner," blurts director Jason Cusato in rapid-fire machine gun nasal. After a short gasp for air: "When walking out of the theater I want them to feel the bond of friendship is the most important thing in life -- Hey, Tony! How yuz doin?" 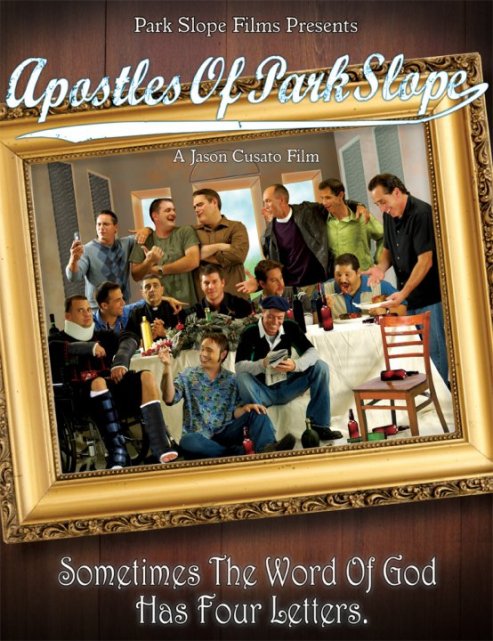 This is an old story in the context of today: a close-knit community held together by individual ethnic identities with religion providing loose background support. Although the old Brooklyn neighborhoods are quickly disappearing -- the departed generally head to the bright lights of Manhattan or the green yards of suburbia Long Island -- the old tight-knit groups still hold some turf in Brooklyn. The old culture still retains the power to comfort. It still gives meaning to life. And when life is the most difficult, like when a mom dies, the old friends are the most important.

Based upon real events and real characters, Apostles of Park Slope is heart-wrenching, inspiring, funny and solemn. There is a relentless stream of surface conflict -- Brooklyn being the premier culture of conflict -- with crude putdowns and vulgar comebacks. Yet, wrapped inside this maniacal circus of flaming words, where in-your-face is the norm, are genuine feelings and steadfast loyalty. Yes, this is a guy's film.

"Yet, if you come across as real," Cusato insists, his mouth barely moving as words rip through his nose, "there is no girl/guy film. It doesn't exist if the film is viewed as real."

The strength of Apostles of Park Slope is it does come across as real. Not as in "reality" television, and not because audiences suspended their mechanisms of disbelief to believe what they are viewing is real. No, this real comes from the gut. From a meshing of what is on the screen with the audiences personal experiences and what they have learned about life -- or at least about Brooklyn, which is certainly not always the same as life.

The characters are distinct and believable, not Hollywood urban cut-outs, and the acting is strong, with most of the cast and crew from and/or residing in Brooklyn. Their speech is not prettified; the words are blowtorched through the nostrils with a vengeance. The setting is authentic, a restaurant on 3rd and Union in Park Slope. The film is about a particular place, not some "New York" shot in Toronto by people living in California speaking in a Mid-Western voice making it all palpable in Bombay, India. This is Brooklyn. And if you don't like Brooklyn, then go eat your popcorn at a mall multiplex with the rest of the sissies.

And the Q&A after the screening was also Brooklyn. Hands shot up as questions were screamed at the director and 12 actors on the stage. Jokes ripped through the audience; soon the Q&A had a parallel riot in the audience. The good guys with trash mouths were not only in the film. The women's hair resembled huge botanical gardens, bouncing up and down as they hurled verbal questions at the stage or at people sitting around them. It really didn't matter. The men had a particular fondness for scratching themselves and when speaking naming that part of their anatomy. If you censored their cuss words, they couldn't say anything.

This was not Cannes, where the men have slap-fests and the women lose their passports. And the after party at the 420 Amsterdam Bar and Lounge had not even begun. No doubt, this movie was going to run very long into the night. And it would probably take a month for my normal speech patterns to return.

There are film festivals that would not screen Apostles of Park Slope because it cuts too close to a reality that makes audiences feel uncomfortable -- well, at least that's what the festival honchos believe. Yet, what drives skyrocketing numbers of filmgoers to events like the Manhattan Film Festival are authentic films, independent films that sharply convey a reality of a particular place at a definite time, of a certain group of people. This film is not another anyplace at anytime meant to achieve the widest possible audience, which is often the most dumbed down and bored possible audience. Apostles of Park Slope zeros in on one chunk of reality, yet a reality with a universal message.

At the end of the film, the local priest who was relentlessly attempting to rebuild his dwindling congregation by getting the gang to attend mass, finally gets the message. Although friends are not higher than God, in this world friends are as important. It's a simple yet immensely important message. One for all of us, even for those who don't live in Brooklyn.