Richard Prince is a century-spanning iconic artist yet his work was below my radar: not because it hasn't been extremely popular and highly sought after for quite some time, but rather because of that. I always imagined that Prince had figured out the zeitgeist and was doling it out to people in the know, people who understood his irony and sophistication and who were terminally cool, certainly a lot cooler than me. Well, I think I am finally catching up. His museum-filling retrospective at the Guggenheim is really a blast....and I use that word in the fullness of its original sense as well as the colloquial usage. If you walk up the ramps at the museum, instead of taking the elevator to the top (as some do to walk down), you can actually feel yourself getting high as you commune with Prince's riffs on the world around us. Mostly, I was guffawing out loud, and when was the last time you went to a museum exhibit for a couple of belly laughs? Prince's work has been subdivided into all kinds of post modernist lingo in the catalogue: counterfeit pictures, rephotography, antimasterpiece, etc etc. But what you mainly need to know is that the guy has a sense of humor, and though he may at one time have been putting us on, dissing the commercial art market and rubes like me, now his art has now come to have an inclusiveness that feels very egalitarian. You think he is the man by the time you top off. Though he's run through lots of ideas in his time, the ones that really jump off the walls are two series of Joke paintings (late eighties and 2004), originally, it seems, meant to be a joke on the buyers. Now you can't even get your hands on one for the collectors themselves have seen the crazy genius of this theme. Though the jokes are Borscht belt or New Yorker variety, Prince is an old hand at delivering them....simply as text in some cases, or with a nod to something more painterly, with checks, deadpan canvasses that totally work as the straight men to his comic. Here's my favorite, from the more recent crop, one I've been dining out on all week in NY and which has elicited gales of laughter: "Two psychiatrists, one says to the other: I was having lunch with my mother the other day and I made a Freudian slip. I meant to say, "Please pass the butter" and instead it came out, "You fucking bitch you ruined my life." 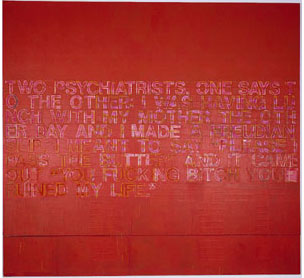 Richard Prince Untitled (check painting) #11, 2004 Acrylic and checks on canvas,131 x 44 1/4 inches © Richard Prince I wasn't the only one chuckling my way through the show; the opening night crowd was as taken with the Prince stand up (without the standing up part) as much as I was. Up at the very top in the gallery that abuts the ramp are the Nurse paintings. 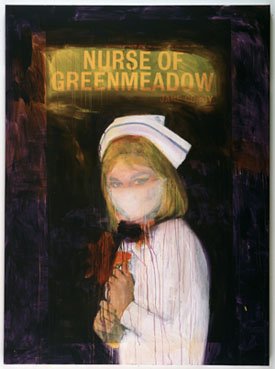 (Though nurses are no longer the fodder for pulp novel covers, why are they still so sexy? Repressed caregivers with their bodices ripped open ?...hmmmm) and the de Kooning hommages (now these would have been interesting down at Gagosian) and once again I felt a little unsteady--admiring of the technical work, but unsure of how I was supposed to feel. No matter. I'm thinking the Emperor has given me a little bit of a pass on this one: even if he has no clothes, I am digging him in the all together.