This March my wife Yolanda and I returned to Cuba to go bicycling for the third time in four years.

I had no idea at the time that Cuba would be in the news much more than usual lately.

Especially in the Spanish speaking media Jimmy Carter's peacemaking visit, the first party Congress in 14 years and the 50th anniversary of the Bay of Pigs invasion, with thousands of goose stepping troops marching through Havana, has dominated the news.
Imbed

(I can't believe they are goose stepping! I heard someplace that soldiers only goose step in dictatorships, because goose stepping looks so ridiculous, if the spectators were not afraid of reprisals they'd laugh the marchers off the street.)

Be that as it may, I thought that this might be a good time to share some very personal impressions of Cuba that might put the recent Cuba news in context.

Take these photos by John Web, one of our pedaling companions on a trip in March 2009. 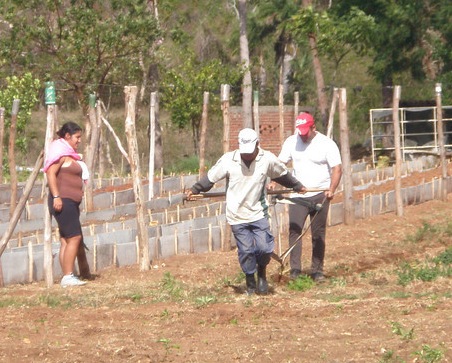 A man pulling a plow? According to Wikipedia oxen were pulling plows as early as 800 BC. 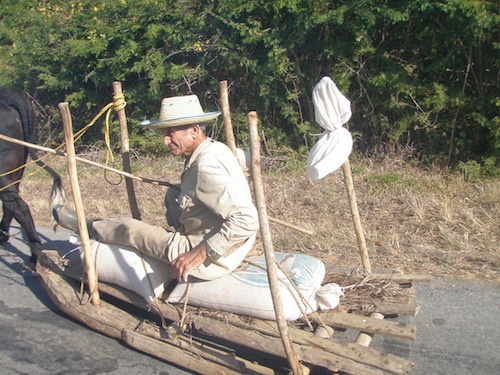 OK this guy has a horse, but what about wheels.

When I made these comments to Yolanda, who grew up poor in El Salvador she had a different take.

"They look happy; they must be plowing their own garden."

"How creative, a land raft!"

Much about Cuba depends on how you look at it.

Scuba Diving in the Bay of Pigs.

Pedaling towards Playa Giron in the Bay of Pigs a large billboard reminds us of the history. 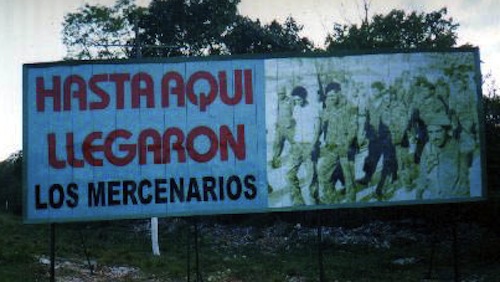 "The Mercenaries arrived up to here."

Rather than invasions I'm thinking of scuba diving. WOWCuba had arranged for us to go diving in the Bay of Pigs.

At the dive center the first thing I noticed was that they did not check for dive certification. The second was that the console had no depth gauge. Small change compared to the bragging rights of having scuba dived in the Bay of Pigs.

The dive was terrific, highlighted by a magical cave dive.

As we left the Bay of Pigs, I could not help but wonder what Cuba would have been like if the invasion had succeeded? Hard to contemplate, but one thing is almost certain. We would have not been allowed to cave dive, because none of us were cave certified. No dive operation subject to the insurance and litigation climate in the rest of the world could have let us dive.

Whether that is good or bad, like so much else about Cuba, it depends on how you look at it.

Talk about depends on how you look at it, I watched an interview with a Cuban-American veteran of the Bay of Pigs invasion on CNN. He related how a group of invaders returned to Cuba to commemorate and honor the dead on both sides. They negotiated with Fidel Castro that they would not be called mercenaries. When a Cuban official referred to them as Mercenaries, Fidel corrected him. "They are not Mercenaries," he said. "They are comrade invaders." As WOWCuba bicycling guide, Jose Sander, says, "Cuba is complicated."

Fast Food and the Speed of Change.

Out of the 12 people in our group 5 of us were repeaters. I asked Brent, a bass player from Vancouver, why he'd come back. He said he wanted to see Cuba again before the fast food restaurants arrived. Living in suburb of San Jose, Costa Rica I saw his point. There are 8 U.S. fast food restaurants within a mile of my house.

There is a Costa Rican joke about a child who goes to Miami for the first time and says, "Look! They have McDonalds here too!"

It is fashionable here and in the United States to knock fast food places, but most Cuban's can't go to Miami unless they risk a dangerous voyage and give up the opportunity to return to see friends and family.

Yolanda's take on the men pulling plows and a legless man on a sledge is valid. Cuban courage and creativity in the face of extreme hardship is uplifting to witness and one of the main reasons we return, but they would jump at wheelchairs and relief from backbreaking labor and all the other trappings of modernity that we take for granted.

Change is coming to Cuba. When and what form it will take is stuff for the pundits. I have no doubt that the average Cuban will be better off when there are McDonald's there too.

But if fast food and all the rest come to Cuba in my lifetime, I'm not so sure I will want to visit again. I find that more than somewhat embarrassing.

Click here to read more about the "new" vs. the "old favorite" paradox, how Yolanda and I got to Cuba the first time by way of Prince Edward Island, Canada and what we found when we got there.


More:
travelcuba
Newsletter Sign Up
An essential daily guide to achieving the good life
Subscribe to our lifestyle email.
Successfully Subscribed!
Realness delivered to your inbox