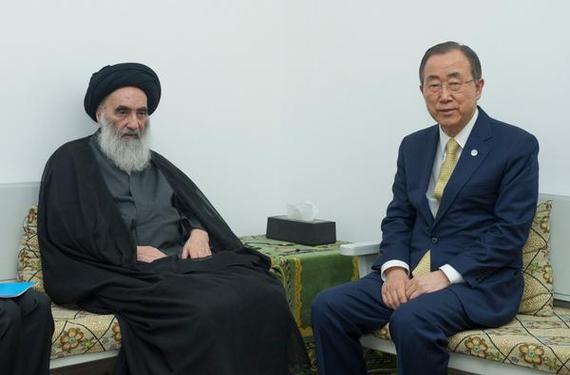 Against all odds, the process of establishing an Iraqi Government has finally made concrete progress in the appointment of Dr Fouad Massoum as new President and Mr Salim Al Jabouri as Speaker for Iraq's new parliament. The escalating momentum in forming a new Federal Government has led Secretary General Ban Ki Moon to meet with Iraq's leadership including Grand Ayatollah Sistani on 24 July. The meeting which is understood, in essence, to have been primarily a consultative one, is potentially a critical turning point in the United Nation's involvement in Iraq's steps towards democracy.

The reader is referred to my recent post published in the Huffington Post ("Forgotten Obligations: The UN Security Council's Role on Combatting Terrorism in Iraq") in which I strongly advocated a more visible and constructive engagement of the UN Security Council in respecting its obligations under various UN Resolutions designed to preserve Iraq's political and territorial sovereignty and combat terrorism.

The importance of the Secretary General's recent visit of the Grand Ayatollah cannot be overstated enough for a few reasons.

I refer readers to the post concerning the edict I co-authored in the Huffington Post ("What Do You Know about Sistani's Fatwa?") in which, contrary to some public misconception, postulated a simple yet unequivocal message to all Iraqis regardless of religious denomination and across all of Iraq's territories (most notably those recently occupied by the Islamic State of Iraq and Syria forces - ISIS), to defend their country and its people, the honor of its citizens and its sacred places.

Given the high level meeting between the Secretary General and Grand Ayatollah Sistani, the UN Security Council would appear to finally recognize that Iraq's political process inherently requires a religious authority in the form of someone like Grand Ayatollah Sistani to serve as a unifying force or "safety valve" when political blocks lose sight of acting in the wider interests of Iraq by getting themselves trapped in the phenomenon of 'Groupthink'.

I believe this situation of "collective hubris" is partially responsible for the deadlock in forming an all-inclusive government. Indeed, it was reported that Secretary General Ban Ki Moon called on Iraq's politicians to unite and create an inclusive government which reflected one of on my recommendations in my Huffington Post piece.

Secondly, Secretary General Ban Ki Moon endorses the fact there is a clear threat to peace in Iraq by calling upon all of Iraq's political factions to counter the "existential threat posed by the recent insurgency." The Secretary General went to state, "Iraq's leaders bear a clear responsibility to protect the security and welfare of all Iraqi people." Both statements strongly suggest the UN both supporting Sistani's non-partisan edict but critically placing emphasis on Iraq taking the lead in protecting its territorial borders and the welfare of its people.

Given Secretary General Ban Ki Moon's statements, the Security Council must surely now have an urgent mandate to take measures it deems necessary to implement UN Resolution 1618 (2005) including the provision of military support to help Iraq's Armed Forces restore and maintain peace in those areas under ISIS control which remains an urgent priority for Iraq's leadership. The recent visit of Iraqi Defence Minister Saadoun Al-Dulaimi to Moscow is an encouraging step in highlighting ongoing military cooperation with various members of the Security Council but much more collective and concerted efforts among UN Security Council members is required to help Iraq's Armed Forces degrade and destroy ISIS's infrastructure. A fresh and explicit UN Resolution would be a positive step in this direction and perhaps add further impetus of finalizing the reconstitution of a new Iraqi Government.

Thirdly, Secretary General Ban Ki Moon addressed the tragic plight of displaced persons and refugees from Iraq and Syria by stating "humanitarian corridors should be established and honoured by all parties." This statement echoes a recent plea made in Erbil in July by the UN High Commissioner for Refugees, Antonio Guterres who underlined the urgency of "countries with influence also need to constructively work towards a solution." His statement was against the backdrop of recent statistics issued by UNAMI which estimates over 650,000 Iraqis have been displaced due to conflict since January and approximately 225,000 Syrian refugees now residing in Iraq.

Neighboring countries such as Turkey are therefore under increased pressure to help, support, protect and maintain those refugees and to follow the exemplary efforts demonstrated by the Kurdistan Regional Government and the Jordanian Government since the civil war in Syria and ISIS entry into northern Iraq.

I take comfort in the fact the recommendations set out in my Huffington Post piece on the UN's future role in Iraq have been broadly reflected in UN Secretary Ban Ki Moon's visit to Iraq and the "right" messages by the Secretary General have finally been conveyed by the mainstream media.

Given the appointment of a new President, the recent public statement by Grand Ayatollah Sistani urging Iraqi leaders not to "cling" to power and the Secretary General's recent visit to Iraq, we may have reached a tipping point in a new and constructive chapter in Iraq's strategic relationship with the United Nations.