Unlike many organized and goal-oriented women I know, I did not plan my pregnancies. Let me rephrase that. I did make the conscious decision that I wanted to get pregnant and luckily, soon after, had plus signs on my e.p.t. (thank you, husband.) However, I did not give one iota of thought as to when the best time would be to have a child and how that might affect, oh, the rest of my kid's life. Case in point, I have two fall babies and in many places (in Vermont, anyway) their birthdays fall just after the cut-off dates for school enrollment.

So here we are. It's the beginning of September and my daughter is back at preschool for her final year. She'll be five soon. Many of her friends have started kindergarten at their public or private schools. Could she have handled the five-day-a-week, six-hour-a-day schedule? Absolutely. I am convinced that my daughter is well above average (as are all of your children and children-to-be, I am sure)... she knows her numbers, her letters, is dying to read, focuses for long periods on activities, has a rich and spontaneous imagination, plays well with others and stopped whining when I dropped her off at school halfway through last school year -- thank god. Plus, we have the added advantage that our rural town's minute public school is anything but crowded and testing her in early for kindergarten was indeed a possibility.

Why not, then? There are arguments on both sides of the issue. Redshirting, or holding a child back so that they have age advantage over their peers in academics and sports, has become a common practice among parents. These kids have an obvious developmental edge. On the other hand, studies out of Norway and Sweden point to the benefits of being the youngest in class, influencing children to work harder and strive more to compete with their peers. Later in life they are more likely to earn higher incomes and have higher IQs than their older counterparts.

These are the issues that make my parental head-spin. What to do? I struggled with this dilemma quite a bit last spring, when I had to make the fateful decision. Was it worth testing my daughter in early so she had the young advantage? Or the alternative: have her be on the older side of her classmates?

When I really thought about it, redshirting wasn't something I was even considering. The fact that my daughter was born in October naturally put her on the older side of the spectrum based on the standard cut-off date. There are plenty of other kids with fall birthdays who'd be in the same boat as her. So why put her under the unnecessary pressure of testing in early? Why put that pressure on myself? Is the goal of education to make my kids strive more, do more and earn more money later in life? Or is it to be happy, well-adjusted human beings who can take care of themselves and contribute to their community? I'm not sure starting school early or late guarantees any of this.

Part of the reason we moved to the country was to try and extend childhood for our kids just a wee bit longer, not to cut it short. This is what I want for them and as parents, my husband and I have the privilege of making these critical decisions on behalf of our little ones. Sure, we will make mistakes but the best we can do is stay informed and go with our gut. Truth be told, I'm the one who's not ready for her to start kindergarten. Why rush it? After all, she's only four... and three quarters. 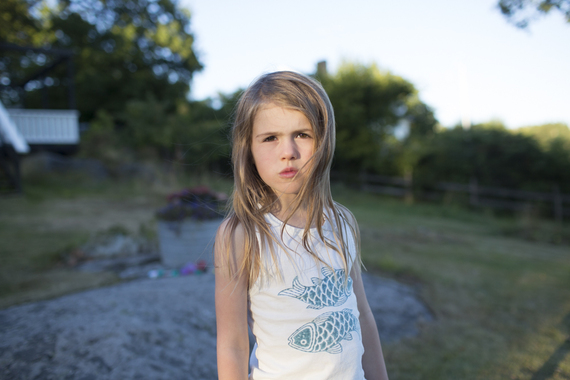 Writer, wife and mother of two, living in Vermont.