The iconic date, captured in a sequel to the time travelling adventure story gave a vision for the future with flat screen video calls and wearable tech. It's a world that some people see around them today.

Anticipating the world head of us enthrals millions of movie fans world-wide, who will mark the date with fanfare.

The hope and anticipation of a better future for our children and grandchildren, not only entertains, but drives economic and social progress.

This week, at the UN 'Global Goal' Summit in New York City, political leaders, activists, and business leaders will converge to chart a course for our future to avoid the catastrophic effects of poverty and climate change.

Will they make progress and prepare for a better future that we can imagine?

We know there are no jobs on a dead planet, and we are already witnessing the loss of lives and livelihoods.

Many communities are already devastated by poverty. Increasingly that poverty is born of the greed of a global trading system. Sixty percent of global trade now relies on production in supply chains - a model of growth that depends on massive hidden workforces with low wages, long hours, insecure work and low-cost overheads that create unsafe work and environmental damage.

When our wealthiest companies can't or won't pay $177 a month in Cambodia or $110 in Bangladesh this is just greed.

When Rina in the Philippines, who sews luxury lingerie, can't tell her 12-year-old son whether she will be home to cook him a meal or say goodnight because of forced overtime, this is an act of inhumanity born of greed. 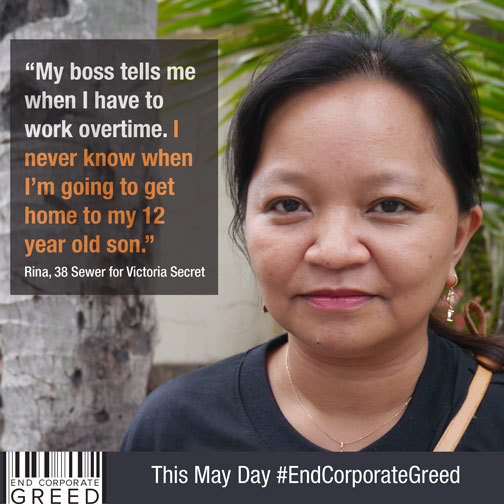 Growing inequality is exacerbated by the companies who simply treat workers as commodities and our governments are cowered by their demands to perpetuate this model of greed.

The ITUC global polling shows us we have the support of the world's people. 62 percent of people want their governments to do more to tame corporate power.

55 percent of respondents in France, Germany, the UK and the US believe most global companies can't be trusted to look after their workers and tougher laws are needed.

On climate 90 percent want to see leaders take action to protect the international community from climate change impacts with almost 80% wanting action in the next twelve months or less.

There is a different future we can imagine than the one that Rina and her son live today.

Climate at the turn of the twenty second century has stabilized with an average increase of two degrees Celsius.

While this has quite dramatically changed the pattern of life and livelihoods for many with even hotter temperatures, seasons that have permanently changed and the loss of low lying lands, it has offered opportunities for others.

People who live in megacities depend on mass transit systems that are powered by clean energy. Our houses are smaller and connected through 'the Internet of things' to smart grids that predict patterns of energy use and reduce consumption of wasted energy.

Our commons, parks, green verges and forests have been expanded and make for easier breathing, less respiratory disease and longer life spans.

Our workplaces are also green waste centers where what can be reused is without question integrated into production and our daily lives. And workplace democracy has transformed our workplaces such that hours of work, safety measures and wages growth are determined by collective agreement. Collective bargaining is underpinned by a minimum living wage that is a floor, and social dialogue is central to sharing resource productivity and protecting planetary boundaries. Social protection is valued with universal quality health, education, childcare and aged care all being a central tenet of a global deal which began a generation earlier.

Technology is shared as a common good and all nations share in global supply where there is no available produce within surrounding neighborhoods or regions.

The key to sustainability based on zero carbon and zero poverty was established in 2015 when the world's governments took decisions to act in concert to stop climate change, implement global sustainable development goals; and led by the G7 group of nations, the rule of law was established to mandate due diligence by corporations through their supply chains.

Forward thinking business leaders followed the example of the B Team and engaged in social dialogue with workers as we transformed our industries.

It took conviction, courage and activism, but by 2050 the world had achieved massive decarbonisation and effected a 'just transition' for workers and their communities.

Coal is no longer burnt for energy and the majority of fossil fuel reserves will never be used, but the workers in these jobs who built the prosperity of previous eras were honoured and looked after and their sons and daughters and families have sustainable and secure jobs.

Renewable energy, re-afforestation and closing the loop on production and waste have made it possible to have a future that survives within planetary boundaries. Many of the industries of today are the industries of 2015, but unions fought for and won the protections to ensure a 'just transition'. Consequently our children and grandchildren can look forward to jobs on a sustainable planet.

Nice dream or possible reality? I prefer to consider it the second.

We have enormous challenges to get there, but working people will not be starved of hope, we have the power to imagine a zero carbon, zero poverty future, and our leaders must have the courage to deliver it.