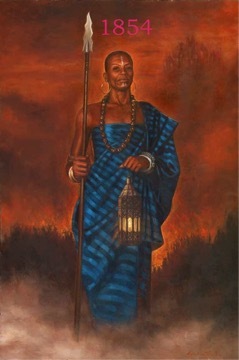 Griot -- cover for Sisters of the Spear.
Painting by Andrea Rushing. Used with permission

History is slippery. No matter who you are, unless you approach your historical research like a skeptical scientist, a surgeon with a scalpel, you are bound to fall and sometimes fall publicly. Embarrassed but unbowed by one such failure, I continued to search for the truth.

When I first started creating an original folk opera, 1854, I knew I would need to do a lot of research. After all, I was writing about a specific time on Martha's Vineyard that was populated with historical characters, many of whom still had family living on this island and would probably make up a portion of the audience. After just a few visits to our historical society, I organized our first public discussion at one of our local libraries regarding the main issues that inspired 1854. Armed with what I thought was unimpeachable information I confidently asked provocative questions about the existence of a slave market here on the island of Martha's Vineyard and the role of Whaling Captains in the slave trade. I had seen the slave manifests of ships from 1797 carrying hundreds of slaves to be sold at market; I had seen bills of sale of the slave cargo. I had been told by a good friend who represented himself to be an expert on the subject that there was a slave market on the Vineyard in the 17th and 18th centuries. Nevertheless, people at the meeting were skeptical about the existence of an actual market.

A month after that first discussion, I spoke to a local historian who assured me that there was never a slave market here and hardly any slaves and that he swore that there is absolutely no evidence of whaling captains being involved in the slave trade. When I offered to show him the manifests, he refused saying he didn't need to see them as he was an expert and besides he was on the board of the very historical society from which I got my information. History is slippery. When you fall, get up. Ice is everywhere. At our next public discussion I immediately apologized for having given out the wrong information and our exchange of ideas continued.

I went back to the historical society and upon closer examination I noticed that the manifests were for slaves scheduled to be sold exclusively to people with Hispanic sounding names and that the port of call was Havana. The writing was difficult to read and took numerous reviews to finally get it right. The librarian helped me. Weeks before, a quick review of the same material left me with the impression that Havana was the place where the ships picked up slaves to be sold in the North. I was wrong. Still, the fact that a Martha's Vineyard family contributed the manifests to the historical society led me to conclude that there must be some kind of Vineyard connection to those ships. The librarian could not trace the donor. I realized that the statement the newly acquainted historian made to me - whaling captains were not involved in the slave trade or in returning slaves to their masters - was true. Rather, I concluded, it was merchant ships that were engaged and that slaves were just one more commodity, albeit very profitable.

Then I had to understand how prevalent was slavery on the island during the 18th and 19th centuries. Not much. No slave market. Just individuals buying and selling few slaves, most of whom served as domestics. The skepticism at our first meeting was justified and the historian I met shortly after was correct. And although he swore that it was a very minor part of Vineyard life, I thought to myself: "tell that to the slaves." I did read of enslaved families owned on the Vineyard being split up as their children were sold to other masters. I saw bills of sale of slaves here from one family to the next as late as 1797, fourteen years after Massachusetts was admitted as a free state. I read a few wills bequeathing slaves to their next of kin. So, slavery was a presence here and hence there was a response in the form of an anti-slavery society based in the wealthiest town on the island - Edgartown. I did not find that there was a widespread island outcry against the practice of slavery, except amongst the native tribe, the Wampanoags of Aquinnah (formerly Gay Head). Indeed, the Wampanoags were proactive and created a stop along the underground railway on their part of the Island.

Then recently I was asked by one of my collaborators if I was going to include the deaf community in the town meeting. Martha's Vineyard is famous for a 19th century deaf population that was quite large and significantly contributed to the creation of American Sign language. I responded by saying that the community existed late in the 19th century and not during 1854. Wrong again! I went home after that meeting and looked it up online. Indeed, the deaf community was at its height in 1854. So, now I have the challenge of integrating this segment of the island community into an opera. After a brief period of reflection, I understood that this was an opportunity to parallel the singing with beautiful signing and movements and that the deaf community would have its own poetic segment in the opera in silence, but manifesting profound emotions on the issue that is being debated. I am calling that part of the population the Silent Chorus. History inspires.

Now I have a completely new perception of Martha's Vineyard in 1854 and I am faced with how to develop the book for the folk opera to accurately reflect the ambience of the time. I had to take what I could from people giving their "opinions" about research they had done and leave the rest on the cutting room floor. I spoke to several historians and came to the conclusion that reflected the opinions of the majority of the people with whom I spoke as well as my own. Slavery was tolerated on this island and the only way it could have been was because island (European) settlers considered the African an inferior person who did not deserve the rights guaranteed by the constitution. Many Vineyarders pride themselves on having enlightened race relations but sometimes the truth is messy. Embarrassing. But over and over I heard people say that racial relations were improving.

As President Obama said recently on that infamous bridge in Selma, Alabama, (and I summarize) to deny progress is to deny the sacrifice of blood and psychology of those who walked before us to help us approach the ideal upon which this country was founded.

I am convinced that these words (written by a slave owner) - "We hold these truths to be self-evident, that all men are created equal, that they are endowed by their Creator with certain unalienable Rights..." were meant as an image for which we were to eternally reach; that the very journey of trying to arrive at true equality would in and of itself help us evolve not only into a more perfect union as a country but as a more perfected vision of whom we can be.

Though in the form of a New England town meeting, 1854 is really a revival meeting plumbing both the depths and heights of human potential. On this voyage, we are all pioneers. We are all mariners. We move forward, backwards, slowly and many times fearfully, towards that moment when hatred ceases to be a word in our lexicon. By going back to 1854, we indeed go back to our future