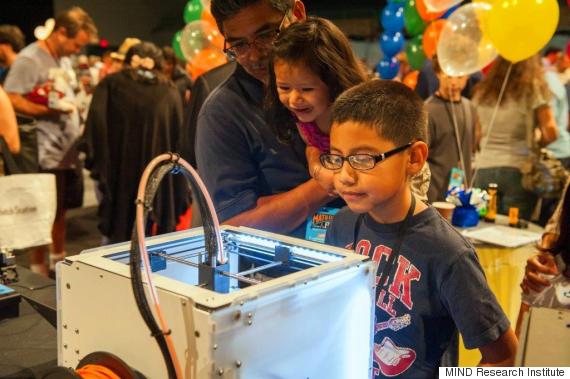 "Where we're going, we don't need roads."
- Doc Brown, Back to the Future

Thirty years ago, the movie Back to the Future 2 gave us a glimpse of what life would look like on October 21 2015. The scene that unfolds includes flying cars, robotic pumping gas stations, jackets that dry themselves, and teenagers cruise around town on hover boards. Of course, society doesn't actually look like this yet. However, there is a buzz-worthy new technology that borders on this futuristic fantasy, something that when I tell my grandma about it, she tells me I'm speaking to her in another language. That something is 3D printing.

Although the field of 3D printing has its roots in the 1980s, it surged in popularity recently thanks to decreased costs (printers can be found in the thousand dollar range) and people's astonishingly creative uses of the devices. News articles regularly come out with new uses for 3D printers, from the 3D printed car to the 3D printed wrench used in the space station, and even the exciting possibility of printing human organs.

One of the key aspects of 3D printing is that it democratizes the design process, enabling anyone with access to a 3D printer to rapidly prototype and inexpensively manufacture their ideas, or select from a huge variety of open-source, ready-to-print options

For schools, this means putting rapid prototyping into the hands of students, teachers and curriculum designers, and a radical new medium to facilitate a more hands-on active learning environment. We see precisely this with the rise of Maker and Hacker spaces for students. Independent spaces are popping up all over the country, too, with schools offering classes that are almost akin to a 21-century wood shop. For curriculum designers, this means a new method to distribute customized, hands-on materials to teachers and classrooms.

At the nonprofit MIND Research Institute we are very excited about the possibilities 3D printers bring to specifically to math education. We've got our own in house Makerspace with seven 3D printers running around the clock. However, instead of printing cars, we're creating tools to foster hands-on math learning experiences.

For the past two years we have experimented with designing and printing interesting math manipulatives that allow students to experiences math in previously impossible ways. Below are a few ways we are using these tools to enhance math education:

Physical, tactile tools can help students understand abstract and sophisticated math concepts. For example, our parabola manipulative allows kids to quickly understand how the 'b' co-efficient in the quadratic equation (y=ax+ bx +c), impacts the shape of the parabola. This is a concept that remains elusive to almost all algebra students (and even many algebra teachers) because there's no easy tool to convey the concept. 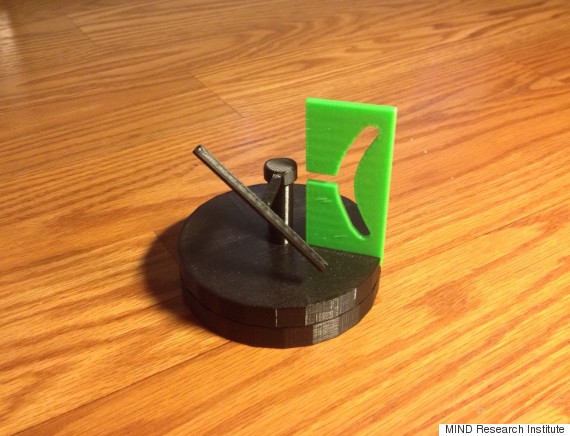 Other tools, rather than clarify concepts, inspire mathematical curiosity and wonder - which invites students to think critically and ask questions.

One example of a "mathematical curiosity" is the hyperboloid tool: a straight line that, when rotated, seamlessly glides through a curved hole. You can see these at science museums, but thanks to 3D printers, you can have a palm-sized one in your classroom. When kids see this, they invariably want to know how it works, and this leads to excited discussion about the mathematics at play. 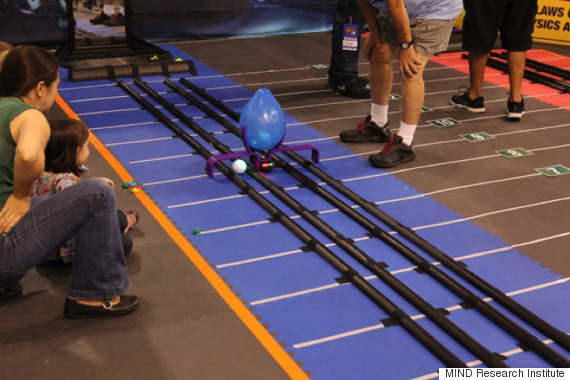 In addition to creating math objects, 3D printers have opened up a wonderland of options for designing components of larger experiences used to facilitate mathematical thinking. A great example of this was in the design of exhibits at our annual Math Fair (check out highlights from our most recent one here), where we filled 56,000 feet with math games and experiences, and a sizable portion of them included 3D printed components.

For one exhibit, we developed a 3D printed a balloon popper, codenamed Sting Fly. This allowed us to put the finishing touches on a physical exhibit that models the classic algebra train problem (two trains heading towards each other at different speeds, where do they meet)? Using remote control balls in place of trains, students place the Sting Fly where they think the trains will meet. If they are correct, the balls pass under its wings at the same time, triggering its laser mechanisms, and mechanically popping the balloon. 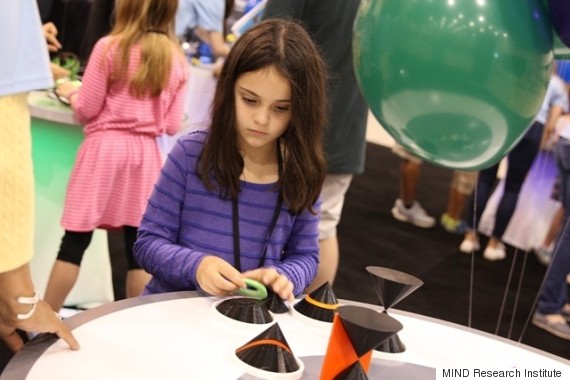 Visitors played with dozens of other 3D printed elements, ranging from rope puzzles, objects that roll uphill, specialized dice and a lemur game piece used in a math-themed African board game.

We're using 3D printers in all of the above ways to try to make math engaging and hands-on for students outside of the classroom and -- and we hope to eventually help teachers within classrooms use them.

The truth is, we have a lot of fun playing with the 3D printers. But our real goal with these intriguing, awe-inspiring little pieces of plastic is to bring math to life in new ways for a new generation of students. So that they can develop necessary STEM and problem-solving skills to create a brilliant future. And to finally invent that hoverboard we're still waiting for.