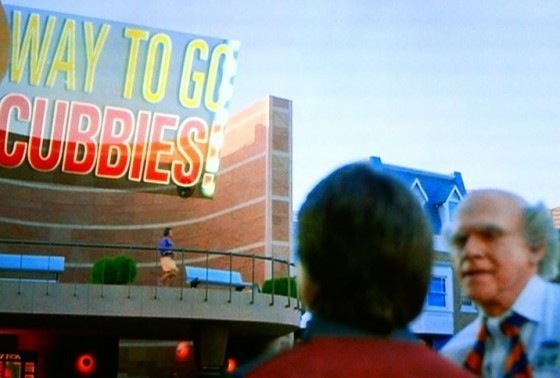 With their 4-0 win Wednesday night against the Pittsburgh Pirates, the Chicago Cubs cracked the big-boy portion of the playoffs and now stand 12 wins away from a World Series title. You know what that means: Back to the Future Part II has a good chance of predicting this year's World Series winner.

Granted, Robert Zemeckis' 1989 movie had the Cubs, who haven't won the World Series since 1908, sweeping an unnamed Miami team at 100 to 1 odds. Unfortunately the Miami Marlins, South Florida's current MLB team, was eliminated from playoff contention in early September, and as a fellow National League team couldn't face the Cubs in the Series anyway. But considering that in 1989 Miami didn't yet have a team, Zemeckis called that shot pretty well, too.

The Cubs also have better odds than Marty was told: They're currently at 9 to 1 to take the whole thing. If the guy Marty meets on the street could, in fact, have gone back and put some money on the Cubbies, he would've gotten a bigger payoff: Chicago was about a 16-1 longshot to start the season.

The whole prediction of Chicago's impending victory started as a joke from Zemeckis for his time-travel sequel. The director was born and raised in Chicago, and the Curse of the Billy Goat was no doubt weighing on him 26 years ago. We may not have flying cars and Jaws 19 may not be hitting theaters, but the Cubs may win the World Series this year, so don't count out Back to the Future Part II yet.

Here are a few other people who think likewise:

CALLING ALL GEEKS: Must root for @Cubs — to fulfill their Prophesy in "Back the Future II" pic.twitter.com/OPDCb6JTuq

Outside @harrycarays in Chicago today, there's a DeLorean, as Cubs won 2015 World Series in "Back To The Future II" pic.twitter.com/chU3zE5pAe

Cubs Win. Back to the Future predicted #Cubs would win #WorldSeries in 2015. Hmmmm. I've ordered my hoverboard. pic.twitter.com/u65pZ0mbi0

If I'm not mistaken, the Cubs win the World Series this year, predicted by Back To The Future. pic.twitter.com/BVDnT6IdE2