"Drivers? Where we're going we don't need drivers." That's what Doc Brown should have said. But instead, he uttered the now famous line about flying cars not needing roads. Alas, the world in 2015 is not what we thought it would be 30 years ago.

Today marks the date featured as the future in the 1989 film Back to the Future Part II, and I've been waiting for this since I was 10 years old. From the moment I watched the film, I dreamt of the future as they portrayed it -- a world of flying cars, robots, and hoverboards. It was utopia. As the years passed, and I watched the world unfold somewhat differently, I began to think about the role of science fiction (and prediction in general) in our cultural narrative. Was it more important to be right? Or to inspire? In the spirit of that inquiry, here are a few words about the film, the future and our place in it. 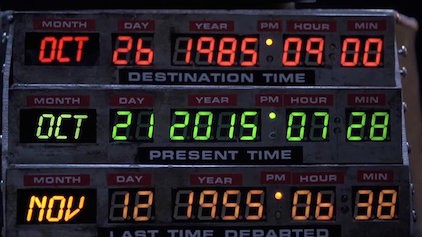 Time circuits depicting the date and time of the future

Think back to the world of 1985-89, when the trilogy began and these films were imagined. Madonna and Wham! were topping the charts. People were listening to them on Sony Walkman portable cassette players. The Apple IIGS was hot shit. No cell phones. No Internet. Tim Berners-Lee was just developing its early foundations at CERN.

In that context, the job of the creative team behind the film was extremely challenging. They had to imagine a world nearly 30 years in the future, from a vantage point where digitization was still a largely academic concept. They had to make it conceivable, but also fun and entertaining. And they had to bring it to life in front of our eyes, without the benefit of modern computer graphics. Given these constraints, it's amazing what they gave us.

Anything that relied on the digitization of information or general computing power. What the filmmakers didn't fully realize at the time was that we had entered the Information Age, a period that would be dominated by Moore's Law  --  more computing power, more information processing, and more possibilities. Everything from the smart home to video conferencing became possible because of this trend. And the film gets a lot of this right. Biometrics, VR and voice control -- present and accounted for.

Anything that relied on human nature. The funny thing about the future is that, for all our phones and gadgets and whizbangery, we're still pretty much the same human beings we were thirty years ago. Sure, we may have outsourced some cognitive load to Google, and even become a touch more antisocial due to our mobile devices, but by and large we want the same things, think the same things, and act the same way. The film did a good job of showing people just being people. It also highlighted one of the persistent challenges of our time: the world of work hasn't changed much, and many of us hate our jobs. Marty's stress and general attitude toward his job at Fujitsu feels eerily prescient of the 21st century job market.

What They Got Wrong

Almost anything that relied on the continuation of existing. Technological paradigms. Instead of Tesla's superchargers we see robotic gas stations. Instead of a text message, Marty is fired by fax machine. Instead of Facebook or Twitter, Marty reads about his kids getting arrested in a newspaper (okay, technically they still exist). Instead of Soylent, we get dehydrated pizza. We know that innovation comes in waves as core technologies diffuse through culture. From the cotton gin, to the printing press, to the steam engine, this has always been the pattern. The filmmakers were able to see one trend  --  digitization  --  but were unfortunately just a few years too early to see the next: the Internet. In its absence they played on the incremental progress of what they knew.

Anything with no basis in 1989's emerging technology. Today we know that exponential technologies get better at an astounding rate, but start slow with often imperceptible gains. As the doubling effect continues, they become viable and change culture suddenly and permanently. As a result, you can often spot the potential forces for change decades before they really happen. If you can't see even the glimmer of a technology on the horizon in academic R&D or the startup community, chances are it's not a great bet for the near future. The technology the filmmakers took on faith? Hovering. All forms of hovering. At least four different objects in the film can hover, and no explanation for this miraculous technology is provided. Even today, we don't see promising 'hover tech' emerging that isn't accomplished with forced air, rotors, or messing with the ground itself. And yet, in spite of this implausibility, when people think of Back To The Future, they almost certainly think of hoverboards.

How We See The Future Matters

The director Robert Zemeckis and writer Bob Gale felt strongly that the film should have an optimistic view of the future, realism be damned. In a recent Mental Floss interview Gale shared their perspective. "We wanted people to look forward to the future because, when we were kids," he says, "we always looked forward to the future." For me, this is the crucial lesson of the film series. Doc Brown says it best near the conclusion of the saga, "Your future is whatever you make it, so make it a good one."

So what do we make of our future, sitting here in 2015? If we are to make our own predictions about the world in thirty years time, how should we proceed? First, we should accept that we are notoriously bad at predicting the future -- that we will miss things, big things. But more importantly, that the spirit of our predictions matters more than our accuracy. The world that we want to build is a sign post for our efforts, and however wrong it might be, it will influence our achievement. With that in mind, I offer a few forces that need to be reckoned with in order to realize a better future for all of us.

Technology. Now that everything can be digitized (even biology) we're going to see waves upon waves of exponential technologies emerging from their quiet periods in the 30 years ahead. First they will appear, and then before we know it, they will change the world. Think: alternative energy, biohacking, VR, IOT, block chain, AI, robotics, and autonomous everything. The funny thing is, we're so aware of this pattern of innovation that you've probably heard of most of the things that will shape your life in the coming years, you just don't believe it yet. This pattern will increase in speed and begin to add fire to the forces below.

Complexity. Now that everything and everyone is connected, we are one big complex system (actually we're a mega complex system of complex systems). The sheer amount of complexity in one Fortune 500 company or small city is beyond our ability to comprehend. So, we'll see whole new patterns in culture ahead. First, more volatility, uncertainty, and surprises. In the weather and climate, in the geopolitical sphere, in the economy, and in our day-to-day lives. Second, we'll start to see a wave of new organizations and tools that accept and leverage this complexity: these adaptive systems and software will seem leaderless, radical, confusing, and short lived. They will not be. If you're looking at block chain, or anonymous, or ISIS, or open source, and thinking "that's fringe," think again.

Humanity. And finally, one force that feels like it belongs to us. Due to our vast improvement in information flow, sharing, and connection, we are realizing that we want to live in a world that values social justice and common ground. We are winning long fought wars against bias, racism, bigotry, and unfairness, but the story is bigger than the things that are blatantly wrong. Many people are getting mediocre education. Many people, if they're lucky enough to have a job, don't like it. Our humanity means that we are raising the bar all the way up Maslow's hierarchy, and we're going to see societal innovations popping up left and right. Basic income. Self organized learning environments. MOOCs. Holacracies. B Corps. Buy-one-give-one companies. The list goes on and on.

We are alive at one of the most important times in human history. We face a future that is incredibly uncertain, and that will be shaped, in large part, by people like you and me, as we decide what kind of a world we want to live in.

There exists a future of artificial intelligence, rampant inequality and irreversible climate change. But there is also a future of abundance, where technology and good public policy leads to a better life for everyone. If you had the chance to take us back to the future -- to 2045 -- what future would you present? What innovations would your audience marvel at? And when will you start inventing them?

Oh, and while you're inventing, would you mind starting with that hoverboard?