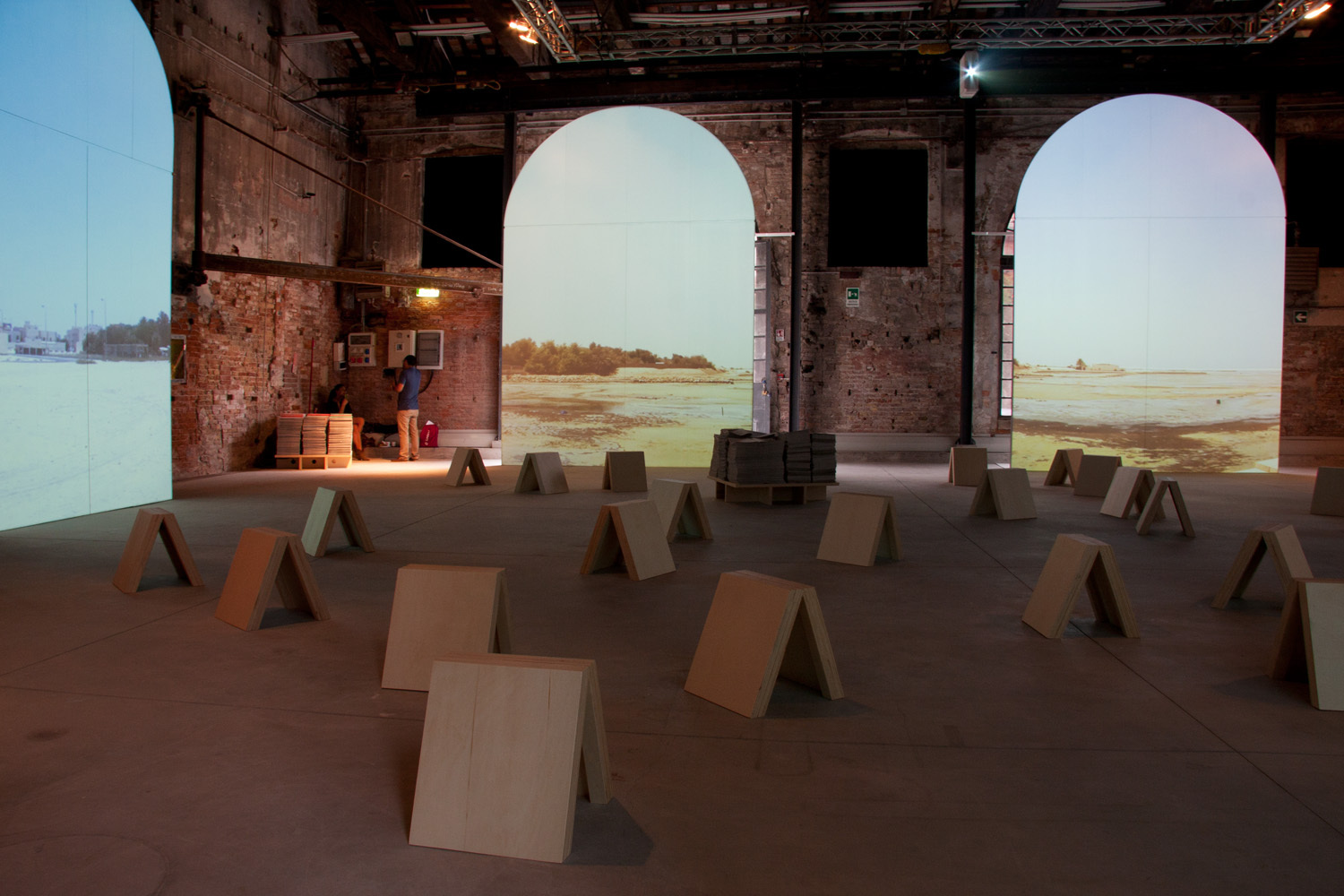 At the 2010 Venice Architecture Biennale, Bahrain won the Golden Lion for its debut national participation with the exhibition "Reclaim Bahrain." The entry was as smart as it was simple -- the implantation of coastal fishing huts from Bahrain into one of the biennale's two main sites, the Arsenale. The huts' peaceful presence was supposed to stoke a conversation about preservation, of not just buildings but also coastlines (reviewed here). Returning after a debut win and with the same curator is unquestionably tough. Those conditions, combined with the unrest that has shaken Bahrain since 2010, made it a year when you could say Bahrain was brave just to show up.

[For images and a review of more of this year's Biennale, visit here.]

Since they chose to return, the team could hardly arrive without in some way address this political and social turmoil that has wracked Bahrain. The returning curator Noura Al Sayeh compared this year's experience with 2010, when the pavilion had to address a public with little or no mental picture of where the island was or what it looked like. Two years later, she explained, it's a different story; people have a clear, if mediated, idea of a kingdom gone awry. The curator and designers decided to approach the ongoing Bahrain tragedy as a media issue. What we see on TV, on YouTube, is "Background," the title of this year's installation. The exhibition responds obliquely to the turmoil, suggesting Bahrain also has other "backgrounds" from which media purveyors choose.

"Background" is based on live-streaming CCTV projections, as eerie or ironic as that might sound coming from Bahrain. The cameras have been set up discreetly on one building's rooftop and beam Bahrain into the pavilion room. The projection screens take the form of and therefore conceal the room's windows and doorways; instead of looking out at Venice, the viewer is supposed to see Manama.

The five views of Manama reveal little movement to make it immediately clear this is live video: A palm barely sways to a weak wind on one screen. A Pakistani delivery truck teeters across another. As I watch the sun going down in Bahrain on a third screen, some footballers enter and start a match. The images seem mundane, banal. Knowing more about the images you realize things aren't as idyllic as they seem. That palm plantation under the CCTV's gaze is threatened by water shortages. That beach is a result of zealous land reclamation. Those new towers have an unresolved relationship with the rest of Bahrain's modern urban fabric.

Upon entering the room, the eye has to adjust, to distinguish objects in a field covered in a toothpaste-blue haze. An uninformed viewer might find that the contrast and color balance of the projections have not been corrected. But the projections are perfectly toned. This is the experience of light in Bahrain. As someone familiar with Bahrain, I found the projections enrapturing. I went back several times to stare into them, yearning for the Bahrain I wonder if I'll ever experience again. 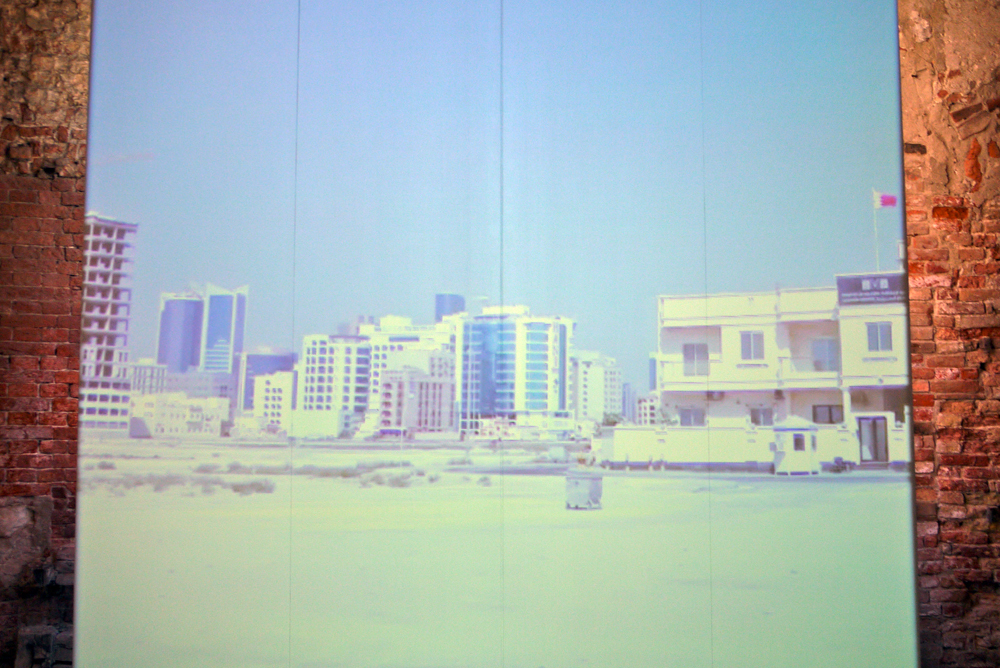 It can't be described as curatorial bravery to reveal apparently sleepier realities than the ones reporters and demonstrators capture with shaky and unnerving recordings of alleyway chases and brutally unfair clashes between teenagers and armed officers. However, if a viewer can identify the nuances (and it isn't easy to do so), then there is a considerate point here. As the curator Noura Al Sayeh pointed out during our discussion of the exhibition, the problems confronting Bahrain are not new ones -- they were there when Bahrain was celebrated for its modernization advancements throughout the twentieth century. What the media conveys are tensions that parties inside and outside Bahrain have chosen to ignore until recently. That luxury is no longer possible. Bahrain is now at a point from which it can never recede. But how can architecture address this politically -- and inarguably urban -- predicament, if architecture can neither help resolve it nor leave it alone?

Even while it has urbanized, Bahrain has consistently challenged the legitimacy of architecture. Its urban centers remain defiantly stretched out on plains of un-delineated space. Open space is not park or public space. Open space is vastness, non-distinction, void. Bahrain expresses a resistance to fill every void. Space might not mean freedom or publicness, but it suggests something left undefined. In the exhibition, some viewers will experience a lot of space left unfilled, except for some low-standing stools. This, however, is a determined void. It represents what the show doesn't reveal. In a way, the exhibition offers a reprieve from the often overly dense Biennale, but it's not necessarily a reprieve if one contemplates what is missing.

In conjunction with 2010's "Reclaim Bahrain," the organizers gave away a dense publication filled with texts, images, and "urban research." This year the free book is almost exclusively images, either taken from television screens or made to look that way. There are two brief texts, one of which can quickly be removed thanks to a perforated edge (text supplied with an eject button). The other text is penned by Bahrain's minister of culture Shaikha Mai Al Khalifa; it is a thoughtful, though discrete, commentary on the need to collect images. Images and projections suggest immediacy, and they can be an easy mechanism through which to slip an idea. They can seem neutral, accidental. Even though they're not. Bahrain's exhibition both exploits the misconception and acknowledges the ambiguity.

One thing I appreciate about the Bahrain exhibition, and this goes as well for the Kuwait and Denmark (Greenland) exhibitions and maybe a few others, is that it takes on current and grave questions. In discussing the pavilion with curator Al Sayed, it didn't seem there had even been a choice as to whether to address, directly or not, Bahrain's most obvious troubles. I wonder where the boundary lies between the national pavilions that have to represent/explain their country and those which don't. That only some national pavilions need to engage the audience this way (as opposed to, for example, promoting a handful of young architects) might be unbalanced, but it makes for intriguing interaction. These exhibitions are what make the Venice Biennale's delivery of nationally sponsored pavilions seem worth the time. Bahrain has had to do this obtusely, and that's not surprising. Don't forget that all of the national pavilions have to be sponsored by a public authority. Rarely would even the seemingly most self-critical nation choose to see itself criticized. And when CNN doesn't air its Bahrain report internationally, would one expect a government-sponsored project to take on its own ongoing, contentious matters?

Did Bahrain have to address its political problems? Egypt doesn't. Great Britain doesn't (remember those riots?). Russia doesn't. What one might find unsettling, however, is that in the room neighboring Bahrain, Croatia does. The Croatian pavilion's soundtrack of public protests sometimes leaks into Bahrain's void like a disconcerting whisper, as if it wants to rustle the CCTV cameras from their sleepy gaze.