Backstage is a city of darkness, movement, and organization, as if a great unseen hand were directing the movement of hundreds of dancers, twice as many costumes and props, stagehands, ballet masters, physical therapists, makeup artists...the list goes on and on.

Here's what happens behind the scenes to make The Nutcracker come to life.

At 10:45 on a recent Sunday morning, the entire Boston Ballet company gathered on stage at the Opera House for its daily 90-minute "company class," led by one of their ballet masters.

Boston Ballet, like many other ballet companies in the USA, has a live accompaniment for each company class. Smaller companies may choose to sacrifice class accompanists as a cost cutting measure. A pianist affords the dancers the chance to practice performing to live music. It also gives the teacher extra flexibility in terms of tempo, but more importantly, music is the backbone of dance. It is a symbiotic relationship.

Company classes typically consist of 30 minutes of stretching and barre exercises, followed by combinations in the center of the room and across the floor exercises. This allows the teacher to shape each exercise, finding the emphasis, tempo, and end goal of accomplishing the steps. You come away from a company class, watching the amazing ways in which the dancers can move, stretch, spin, simply get their feet over their heads, and the PGA slogan comes to mind.

These guys are good.

After class, the company, and the Opera House, ready themselves for two performances of The Nutcracker, which means that more than five thousand attendees will witness ballet magic over the course of the afternoon and early evening.

More than 220 Boston Ballet School children are divided into three casts of 60, which means that on any given December Sunday, you've got 120 sets of parents dropping off and picking up kids in the narrow alley outside the Opera House's stage door.

Now the dancers prepare. While there's no set order for who goes into costume and makeup at any given time, somehow all find their way into their costumes, hair pieces, and makeup for their first role in the show. Some of the dancers will perform multiple roles, which means costume and makeup changes in small, curtained off areas backstage.

In the wigs and makeup room, the dancers create their transformations from normal, extremely fit-looking 20-somethings to the various characters they'll be playing. Upstairs, during those rapid costume changes, dressers using iPhone flashlights transform the dancers from one role to the next. Somehow, everybody is ready on time.

In a room adjacent to the downstairs makeup studio, Boston Ballet has a physical therapy room where two full time physical therapists work with the dancers. They employ the same sort of muscle relaxation technology used by Olympic athletes. Ballerinas lie back on chaises, their legs ensconced in what look like long, black tubes, which break up lactic acid in their muscles and otherwise prepare them for a strenuous afternoon of dance. They're in makeup, they're texting, and they're chillin'. The equipment is called NormaTec, apparently because the mother of the creator of the devices is named Norma.

Back upstairs, the musicians have taken their places in the rather spacious, by theater standards, orchestra pit. They put themselves through their final warmups of the Tchaikovsky score.

"We do 43 performances, but thank God it's Tchaikovsky," says Maestra Beatrice Jona Affron. "If it had been a second-rate conductor like Minkus, December would be pretty miserable!"

She jokes that she's better known for the back of her head, which faces the audience, than her actual face.

The stage manager, who "calls" the show from a consule just offstage right, announces five minutes until show time. The dancers in the opening scene take their places. Stagehands make sure that the set and lighting (and props) are ready, and then as has been the tradition for centuries, they pull on the rope.

It's curtain up, and the ballet begins.

Backstage, most of the dancers are in fairly constant motion in the minutes before they go on stage, stretching, twirling, or otherwise practicing their routines.

Ballerinas take over the large freight elevator that is converted into a warm-up area after load-in is complete, about 20 feet from the stage's right wings, and take time to stretch, text, and chat prior to their entrances.

A gaggle of adolescent girls, in white reindeer costumes, complete with white antlers on their heads, gaze with fascination at the ballerinas, perhaps wondering if one day they will be as long and lean as the professional dancers.

Children Supervisors bring lines of children of various ages up onto the stage for their scenes. Yes, there have been moments of fear for some of the kids, but today, everything goes off like clockwork.

Early in Act I, a male dancer in a bear suit has his head fastened on by a dresser. Stagehands pack him into a box and moments later he's wheeled out on stage, where he explodes from the box and dances. Dancing with a bear head is hard because as you spin, you have no reference for the locations of the front or the back of the stage.

Another stagehand says, "Merde, girls," the traditional ballet term for encouragement, to a group of teenage girls about to go on.

Here are two girls, talking animatedly about moves they're about to make on stage, standing tutu to tutu.

At the end of Act I, two snow machines, strategically placed high above the front and the back of the stage, drop fake snow. Because of the way they are positioned, it appears to the audience that the entire stage is covered in snow.

In Act II, two principal dancers, a man and woman, finish after flying leaps, lifts, and other exhausting moves. As soon as they are safely offstage, they drop to the floor, temporarily exhausted.

Six stagehands put ski boot-like stilts on the male dancer playing Mother Ginger and then pull on ropes; her vast "skirt" descends from its storage place 15 feet in the air and fastens around the dancer, in full women's makeup, corsets, and push-up bra. They then usher him toward the stage.

Overall, the mood backstage, from curtain up through the taking of bows, is one of energized calm.

Nobody needs to be told when to come in; if dancers know anything, it's how to listen for their entrances. The entire show goes off like clockwork. No flaws, no cases of nerves. The audience goes home enchanted. Before they are out of the building, the stagehands are already resetting the stage for the 5:30 show.

The most amazing thing about life backstage at The Nutcracker is how seamless and invisible all this is for the audience.

After having witnessed Boston Ballet's flawless Nutcracker from behind the scenes, the only remaining question is why anyone would miss the opportunity to catch one of the 30 remaining performances from "front of the house." 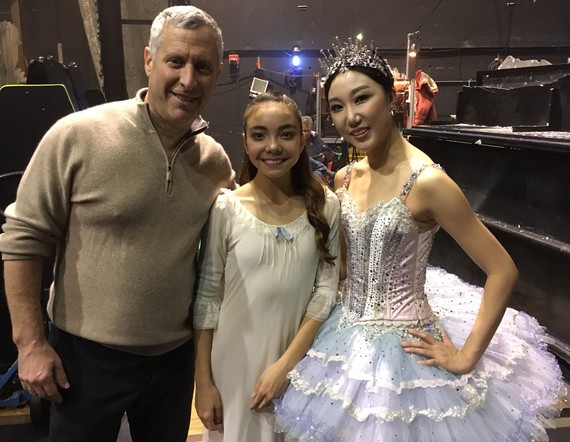 the nutcrackerDanceBalletboston-balletArts
Go To Homepage