UPDATE: J&D's pulled the plug. Doesn't mean our society is still not doomed

So this exists. "Bacon Baby." It says it's manufactured by a company called J&D's. But you may know them by their more common moniker: destroyers of our society. What is it? Bacon flavored baby formula. But that's misleading. I've had Jolly Ranchers that were green apple-flavored, but we all know there are no apples in those ranchers. This, however, includes four servings of bacon in every scoop. FOUR! While I'm all for the science that's capable of replicating bacon in powder form with such efficiency, what adults are requiring four servings of bacon at a time? Three servings perhaps. But that's only when you're at the local Steak and Shake and you tell your brunch-mates not to turn down the free bacon because you'll "handle it."

What's especially scary is that this could easily become the norm. In fifty years, the leaders of our country may never have lived in a world where babies were not greeted with bacon the moment they emerged from the womb. If anything, we non-baconites will be the weird ones, frowned upon by the colleagues who go out for after-work bacons.

So knowing what our future inevitably holds, we here at HuffPost Comedy will not go out and say our society is doomed. Nope. We don't want to risk angering the bacon overlords that will be running this nation, blacklisting those who ever harbored anti-bacon sentiment. (via Bacon Salt Blog) 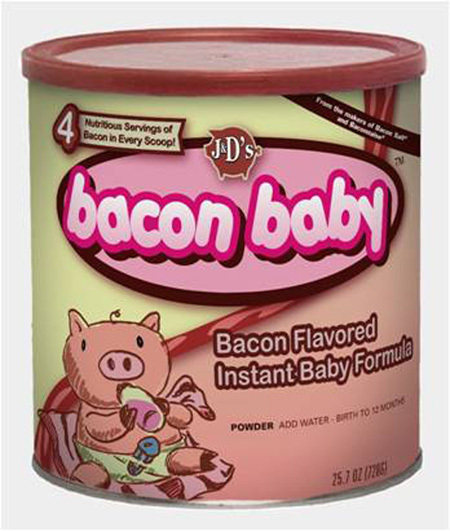