According to a press release:

bacōn is a passion project mirrored after one of the 20th Century's greatest legends. The Legend of Fargginay began in 1920 when quite by accident John Fargginay, a Parisian butcher discovered the ability to dramatically elevate his customers' mood with a secret recipe blending herbs & essential oils with the essence of...bacon. As the story goes, film stars & heads of state would frequent his shop to procure the magical elixir. With a wink of the eye and the secret code, "fargginay," customers would be slipped a discreet pouch containing the formula said to trigger pleasant memories. After a massive fire on July 4, 1924, the business was lost and so was the formula...Until now.

bacōn's tagline: "scent by the gods." Our suggestion: "stench of a diner." And suddenly, we're hungry.

The eau de ew comes in both bacōn Classic and bacōn Gold, each only $36.

Take a look at the perfume's kitchy commercial below. We will, however, confess that we're impressed with the packaging. 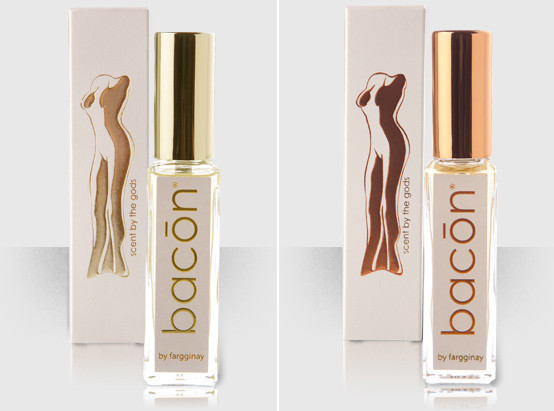 More:
StyleVideoBaconBeauty
Newsletter Sign Up
An essential daily guide to achieving the good life
Subscribe to our lifestyle email.
Successfully Subscribed!
Realness delivered to your inbox