America has an undeniable love affair with bacon. On average, Americans each eat about 18 pounds of bacon a year. And considering the number of people who don't eat pork or any meat at all, some of them are scarfing down a disproportionate number of the approximately 5,760,000,000 pounds of pig strips consumed across the country each year.

Bacon has become a permanent staple of the American diet, and unfortunately, it's pretty unhealthy. But hey, doesn't it sometimes feel like all the best things in life are bad for you? Here are some very unfortunate truths about your favorite piece of meat, balanced out by reasons that prove how great bacon is. Because it really doesn't matter how bad bacon is for you, if you love it, you're still going to eat it.

And no matter what you're told, bacon will always be the key to your heart...

Bad news: Bacon has a lot of fat -- the bad kind.
Sixty-eight percent of bacon's calories are fat, with half of that fat being saturated. The amount of saturated fat in bacon explains why one ounce of bacon contains 30 milligrams of cholesterol. Research has shown that eating foods with high levels of saturated fat can lead to a higher risk of developing heart disease and stroke.

Good news: Bacon and eggs is probably one of the best combinations ever.
There are so many ways you can eat bacon and eggs -- in frittatas, in omelets, on sandwiches or just plain together. It always tastes good. 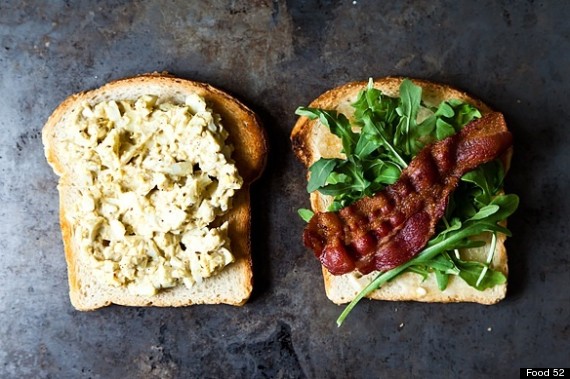 Bad news: Bacon, like other processed meats, could contribute to heart disease and some cancers.
A study done by researchers at the University of Zurich found an association between processed meat and higher risks of dying from heart disease or cancer. Processed meat contains nitrates, preservatives that, when absorbed by the human body, convert into N-nitroso, a compound that could cause cancer. Also, a study conducted by Columbia University found a direct link between consuming cured meats and developing chronic pulmonary disease.

Good news: It's still better to choose bacon over sausage at breakfast.
While neither meat is good for you, WebMD reports that two pork sausage links contain 140 calories and 12 grams of fat. Three strips of pan-fried hickory smoked bacon contain 120 calories and 9 grams of fat. 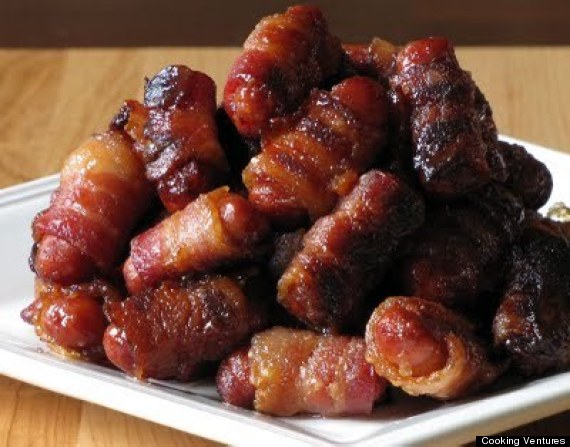 Bad news: Pigs are adorable.
Seriously, they are so cute.

Good news: Bacon on a burger is one of the most heavenly pairs.
Just forget about that cute little piggy and think about how delicious the combination of pork and beef tastes...

"Bacon And Egg Burger" by Taste And Tell 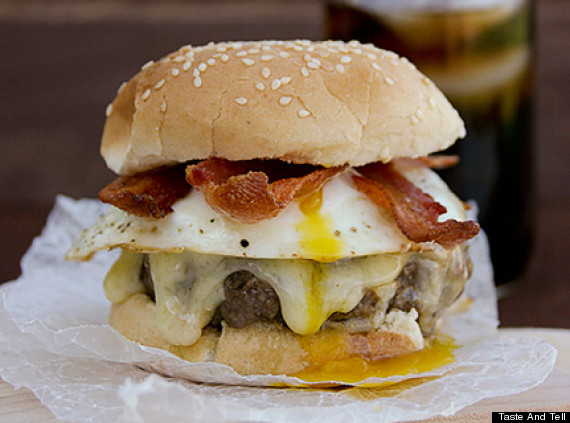 Bad news: Factory-farmed pigs are more likely to get you sick than free-range ones.
Factory-farmed animals usually live in concrete cells with no outside interaction. Nutritionist Sara Bilbe says, "Pigs are fairly intelligent animals and this lack of stimulation in these cells leads to high stress levels and therefore high illness." The Week reports that MRSA, a bacteria that has a strong resistance to antibiotics, has been found on factory pig farms in Canada, which sells millions of live pigs to the U.S.

Good news: Pigs are great recyclers, even of marijuana.
MRSA aside, Policy Mic reports that a group of farmers in Washington have been experimenting with turning their cannabis waste into feed for their free-range pigs. Turns out trying to give these pigs the munchies results in some high profit: A local butcher, William Von Schneidau, reported that the "smoked" bacon from the farm was "especially popular." 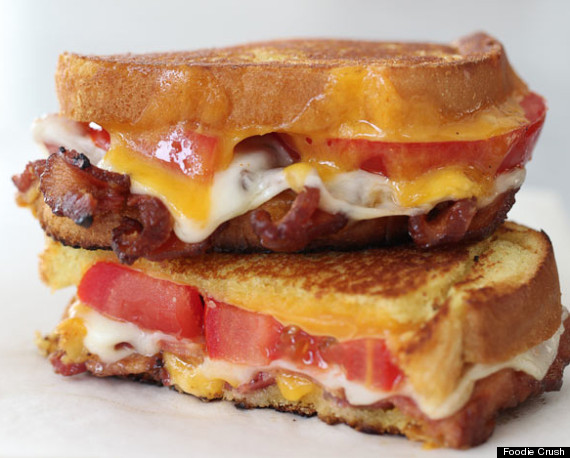 Good news: You can have sex with bacon.
If you are one of those people who would eat bacon over having sex, you can now have the best of both worlds. J&D Foods seems to be a company devoted to including bacon in every aspect of life. Therefore they have created bacon condoms: 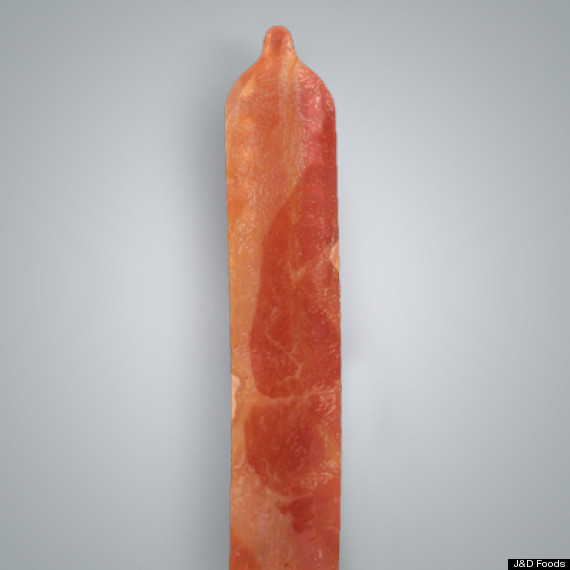 Don't forget to enhance the experience by smelling like bacon during the moment with J&D's bacon deodorant: 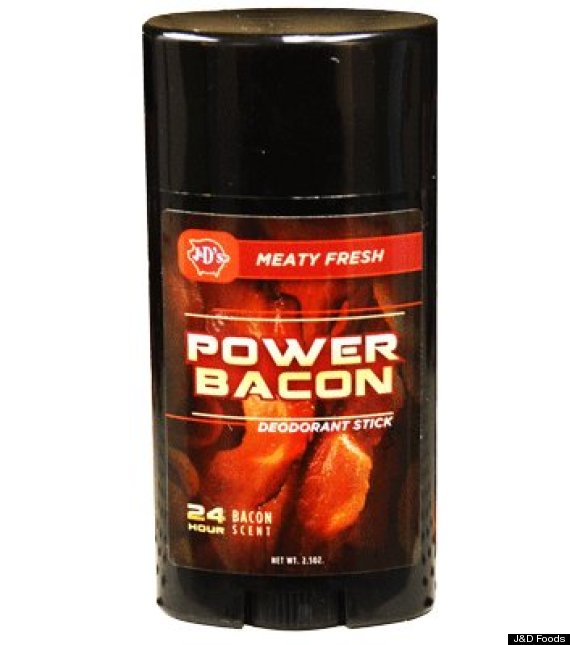 Bad news: Bacon has a lot of sodium.

And too much sodium puts you at risk for heart disease and high blood pressure. One slice of bacon has about 190 milligrams of sodium. According to the Mayo Clinic, the Dietary Guidelines for Americans recommend having 2,300 milligrams of sodium every day. If you eat four to five slices of bacon, (and who doesn't?) you're already approaching half the amount of sodium allotted for the day.

Good news: Bacon could help cure hangovers.
Yes, at least one study suggests a bacon sandwich may have the edge when it comes to helping you get through that hangover. A study at the Newcastle University's Center for Life examined just why the bacon sandwich could be the perfect culinary treat to absorb all that alcohol. Researcher Elin Roberts says it's because of the mix of bread and the amino-acids found in bacon. She told the London Times, "Bread doesn’t soak up alcohol but is high in carbohydrates that boost blood-sugar levels and speed up the metabolism, helping to get rid of alcohol quickly. Bingeing on alcohol depletes brain neurotransmitters but bacon, which is rich in protein, contains amino acids that top these up and make you feel better."

"Avocado BLT's" by How Sweet It Is 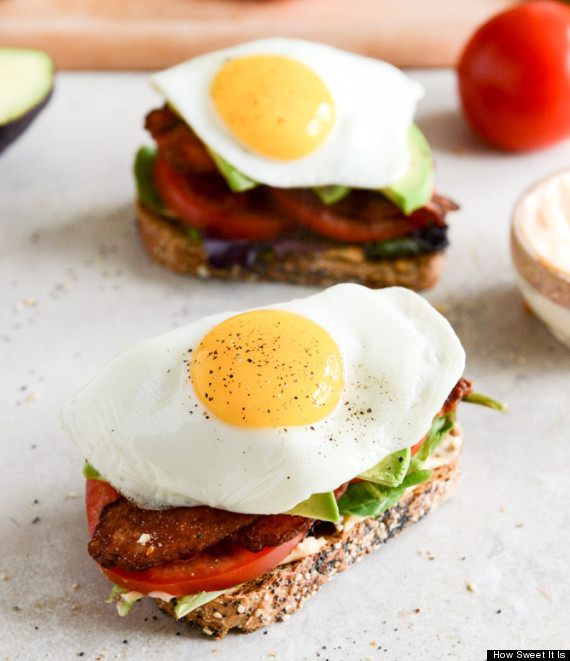 Bad news: Bacon, and other processed meats, may be associated with other unhealthy lifestyle choices.
A study published in the journal BMC that analyzed 448,568 men and women between the ages of 25 and 69 from different countries found out that those who ate more processed meat were linked to premature death due to cardiovascular disease or certain types of cancer. The researchers argued that this was because those people were also more likely to indulge in bad lifestyle choices, like smoking, drinking alcohol in excess and not eating fruits or vegetables.

Good news: The amounts of Vitamin B3 in bacon may help you live longer.
In a study published in Nature Chemical Biology, researchers found out that the niacin (Vitamin B3) in foods like sun-dried tomatoes, peanuts and yes, bacon, could help you live a longer life. When the researchers fed roundworms a ton of niacin, they lived one-tenth longer than the worms who weren't fed any niacin. While we recommend getting your niacin from healthier food options, bacon does include substantial amounts of the vitamin. 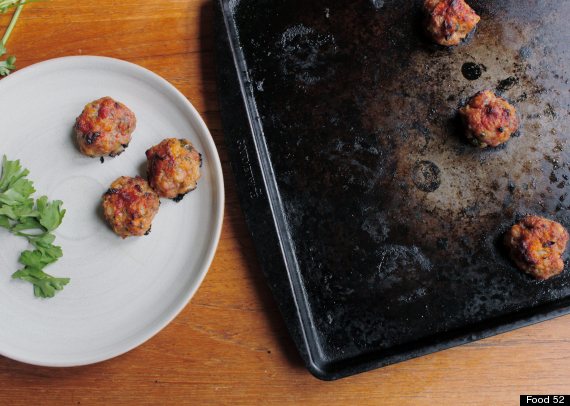 Bad news: Bacon could be linked to a lower sperm count.
If you're a guy and trying to have a baby, you may want to hold off on the bacon for a little while. HuffPost reported that researchers at the Harvard School of Public Health analyzed sperm samples from 156 volunteers and compared them to the participants' food intakes. Those who ate a lot of processed meat -- including hamburgers, hotdogs and bacon -- were associated with lower sperm concentration and morphology.

Good news: A component in bacon could make babies' brains healthier.
If you're a pregnant woman, giving in to your bacon cravings may not be all bad. A research study published by scientists at the University of North Carolina shows that the chemical choline helps fetuses develop regions of the brain linked to memory. Of course, choline is also present in much healthier foods, like yogurt or chicken, but the chemical is found in foods like eggs and pork. 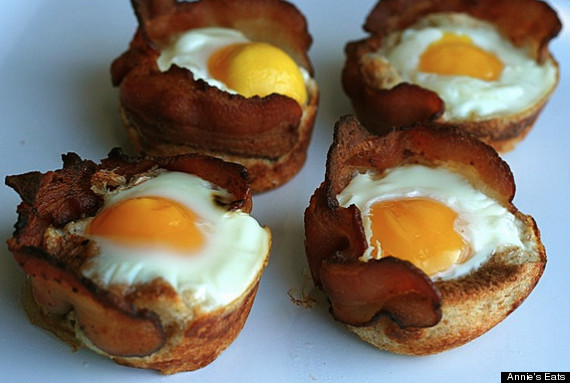 Bad news: The "Bacon Explosion" has 5,000 calories and 500 grams of fat.
This monster meat creation contains more than two days worth of calories and a dangerous amount of fat.

Good news: It probably tastes pretty damn good.
How does bacon wrapped around a filling of spiced sausage and crumbled bacon sound to you? It's meat wrapped around meat with some more crumbled meat on top of it. The creators, Jason Day and Aaron Chronister, thought of the idea in 2009 when they were challenged on Twitter to create the "ultimate bacon recipe." The recipe calls for a seasoned woven bacon base, followed by a layer of sausage meat on top of it and crumbled bacon sprinkled on it. Don't forget to add the BBQ sauce!

The "Bacon Explosion" accentuated by candlelight. 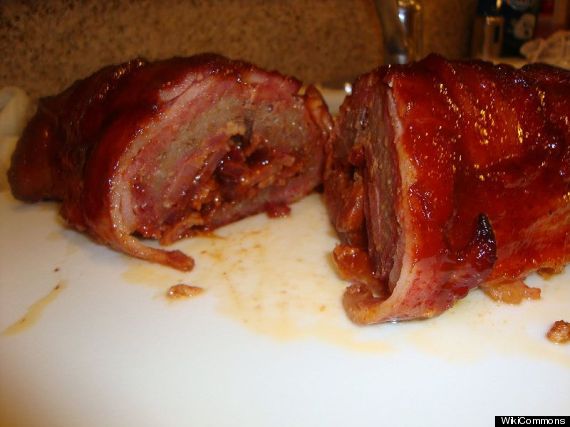