To be fair, I was already a little annoyed with Bacon Mania. The Bacon Explosion. Bacon Camp. Bacon happy hour. Bacon of the month clubs, bacon gift baskets. Bacon scented candles, vodka, rolling papers, and bras. Bacon alarm clocks. Every single one of these shirts. Oh, and just in case life is going generally alright for ya overall but you could use just a liiiiiitle more attention, you can wrap bacon around your car. I can't think of any other food that has pretty much become an accessory.

Before you accuse me of a thing as heinous as disliking bacon, let me profess: I love bacon. LOVE BACON TRULY MADLY DEEPLY IN MY HEART AREA. It's delicious, versatile, salty, smoky, crunchy, and smells like I Want To Go To There International Headquarters. We all love it. But why do we need to be so ... loud about it?

In this context, I opened my mail one day to find this: 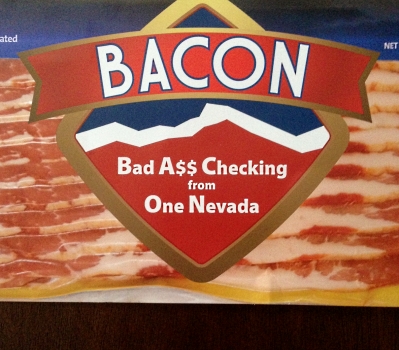 (Not to mention that when it comes to my checking account, I don't need a "Bad A$$" one. "Hella reliable" would be a much better choice, if being edgy is absolutely necessary.)

The whole bacon campaign goes much further than this mailer I got: turns out there was a whole lot more-mysterious billboards, a hashtag, and a bunch of bad commercials. The more you dig into this, the less sense it makes, and not even in a good "haha, this credit union is just the quirkiest" kind of way. It feels like your parents going to Burning Man because hey, the kids all moved out and the Joneses next door said they'd water the lawn and collect the paper, so why not see what all the fuss is about?

Let me just reiterate what Brett said here a while back: let's just chill out.

At least when Scope cashed in on the trend with an April Fool's joke and put out fake ads for Bacon mouthwash, it was funny (to yours truly, anyhow--apparently some people got pissed). 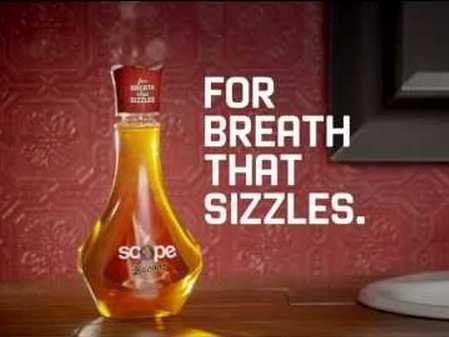 It was obviously fake, and it capitalized on the trend while simultaneously poking fun at it-instead of awkwardly and lazily trying to ride the bacon wave to sell a completely unrelated product.

And when I say that -- dear heavens! -- I do not mean bacon in general. Of course it's delicious, and of course we're going to keep eating it for that very reason. But as an accessory, a cheap laugh, or a marketing ploy to sell unlimited cash back on debit card transactions? Over. Let's let it go gracefully, and appreciate bacon for what it does best, which is taste fantastic. Emily here knows what's up. Bake it, eat it, live happily ever after.